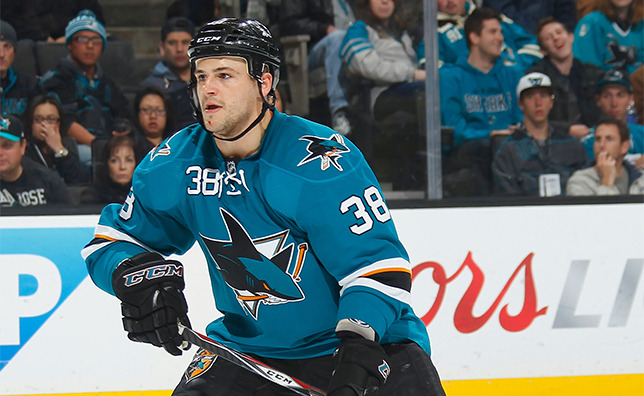 The San Jose Sharks dropped the second game of their best of seven series with the Edmonton Oilers. It was not a pretty game for the Sharks for many reasons.  Their power play was especially bad allowing 2 short-handed goals with nothing else to show for it. After a frankly embarrassing game, the talk around Teal Town is if enforcer Michael Haley will enter the lineup.  Yes, Micheal Haley is the guy a team that is missing Joe Thornton is getting the most talk of entering the lineup for game three.

When lineup decisions are made we as fans, always go after the coach.  In this case, we are wrong. My issue with the idea that Michael Haley would need to draw into the lineup is that the team forced his hand. A lot of the talk on last night’s Teal Town After Dark focused on this hit on Logan Couture.

I’m not going to let this article devolve into clean, not clean suspension or any of that. There are plenty of takes to read on that debate. If you consider this as well as an earlier hit on Dillon it isn’t difficult to understand why people would clamor for Haley to enter the lineup. Peter DeBoer has made some questionable coaching decisions through the year and so far these playoffs. Boedker’s continued use on the power play that is so clearly broken being the largest gripe I have. If he chooses to put Haley back into the lineup it’s because the team on the ice has given him no other choice.

The Sharks NEED of Haley the bigger issue

Micheal Haley isn’t a bad guy. Haley fills a very specific role for this team and is one of the better “enforcers” the sharks have employed in as long as I can remember. That said, there isn’t a lot in his game that the Sharks should need in this series. They have better-skilled players currently in the lineup.  The reason people want Haley to draw in is to protect a player like Logan Couture from getting run the way he did in game two.  To me, the bigger issue isn’t Haley in the lineup it’s that the Sharks “NEED” him in the lineup. Why do the Sharks need Haley in the lineup?  Simple, they to a man, had no response to Kassian for either hit. I’m not expecting Patrick Marleau to drop the gloves and streak after Kassian but just watching the play the way he did is brutal.

The Sharks have sandpaper in their lineup, Dillon is a big boy that can take care of himself. Timo Meier, who isn’t a fighter gave Lucic fits in game one. Brent Burns is a punishing player to play against. You don’t have to drop the gloves to make people accountable, hits and hard work also work. The problem is that the Sharks showed none of the above, and I frankly don’t understand it. I don’t think the Sharks should need or would benefit from Haley in game three. It’s a risk of more dumb penalties against an Oilers power play that could wake up at any moment. Haley is a middleweight and bless his heart for trying but most of the Oilers big guys will beat him to a pulp. Haley entering the lineup would likely come at the expense of a younger player who has not been the problem.

Most importantly Haley will not fix the real problems with the loss in game two.  Haley will not make the power play succeed. He won’t give the penalty kill less work. He will not make an effective 4th line that can take advantage of any matchups. If the Sharks put Haley in the line up it’s because of a failure on their part to protect themselves and their teammates.