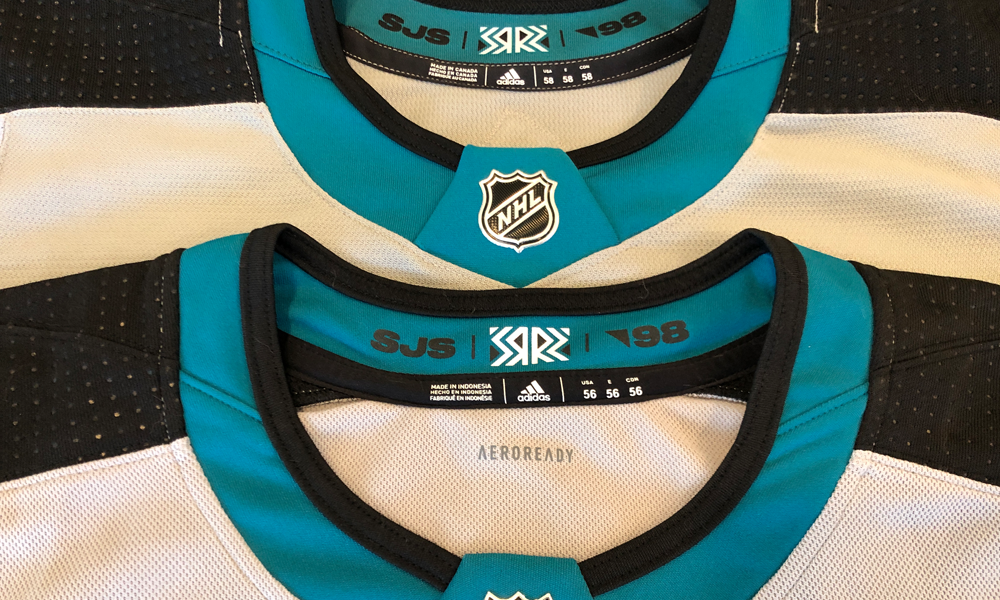 Whether it’s deceptive and unethical business practices, ruining sports merchandising, or running secondary sites that sell counterfeit merchandise, I’ve spent a lot of time calling out Fanatics. However, the time has come to direct that ire towards Adidas and the NHL. Any TealTownUSA follower knows a few of us here are jersey geeks. Hockey jerseys are simply one of the coolest things in sports. But for the love of all things NHL, it’s time for Adidas to make the pro stock jerseys players wear available for fans to buy at retail outlets. Since Adidas is readying a new jersey production process based on the 2019 All Star Parlay jersey, it’s also time to stop referring to the jerseys they currently sell in stores and online as “authentic”. 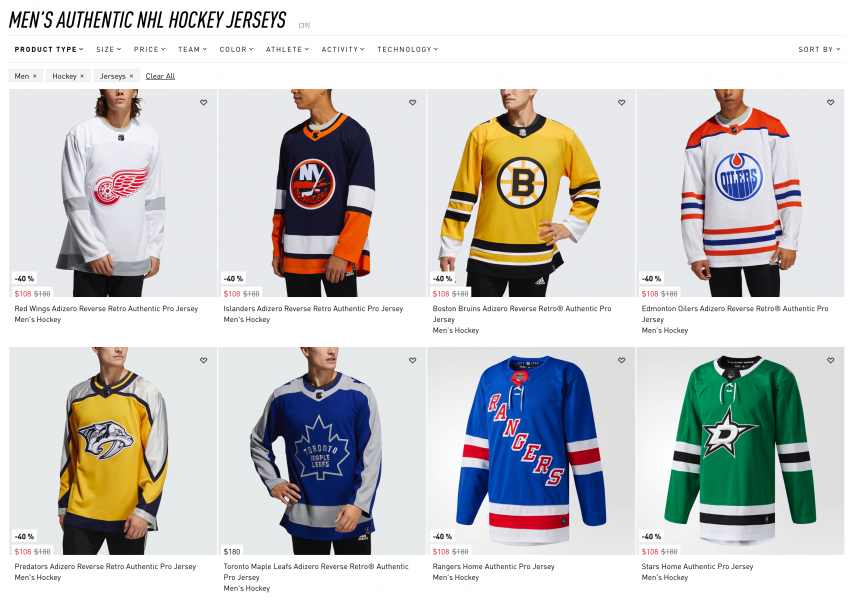 Prior to 2007, there were only 2 types of jerseys available for fans to purchase in stores. You had the choice of an authentic, which meant the same stock as what players wear on the ice, or you could purchase a replica. This was the same in baseball, too. As you may expect, authentic jerseys are a tad roomier since they’re designed to be used with equipment whereas replicas are a little more form fitting. But when you saw the jerseys side-by-side, generally the only way to discern one from the other was authentic jerseys have a fight strap and elbow stitching. The nameplate, numbers, and patches were the same between both as you can see in the photos below. Click on the images for large versions.

In 2007, after teams used a revolving door of jersey company names such as Maska, CCM, Koho, Nike, etc…, Reebok’s purchase of The Hockey Company led to all jerseys being Reebok branded. In 2017, that deal rolled over to Adidas despite the fact that Adidas owns Reebok. However, when that 2007 Reebok announcement was made, Reebok unveiled what’s known as Reebok Edge 1.0 and it was considered pro stock. However, two months into the ’07-’08 season, players complained that the jersey material, with its Scotchguard-like ways, soaked skates and gloves with sweat. It forced Reebok to create Edge 2.0 in Canada. However 1.0 remained available to fans and is how “Indo-edge” apparently came to exist, giving fans 3 levels of jerseys to now choose from:

The problem for jersey hounds is that the retail authentic jerseys replaced pro stock in stores. Suddenly, fans could no longer get what the players wear unless they find them on auction sites or at equipment sales.

Obvious shortcuts were taken when Reebok rolled out their replica jerseys in 2007. The beautifully embroidered shoulder patches were replaced with cheap looking plastic decals, as seen in the photo below. The material of the replicas are also noticeably lighter and thinner than the retail “authentic” and pro stock jerseys. The Reebok replica model, called “premier”, is essentially what Fanatics currently calls “breakaway”. It’s basically a nice way to say “cheap”.

Aside from the ridiculously inferior plastic shoulder markers, the Reebok premier replica jerseys are actually quite comfortable, consistent and, in my opinion, far better than the Fanatics replicas and Adidas “authentic” jerseys made today. In my opinion, Reebok replicas were better quality and fit than current Adidas “authentic” jerseys. And for half the price of a Reebok retail authentic, you got a quality jersey that you weren’t worried about spilling beer on. In the photos below, you can see the three different jersey styles. Notice how the premier material is different from the retail authentic and pro stock. However, when you compare the retail authentic to the pro stock, there’s not much difference, and all 3 have a comparable fit.

While I maintain retail authentic jerseys were, and remain, unnecessary, at least the feel and fit of Reebok is very close to pro stock.

While the Reebok retail authentics were good quality, they still weren’t the same as what the players wore. It appears Reebok was trying to combine the best of both worlds, marrying the pro stock quality with replica fit. However, the $299 starting point was tough for some to stomach when it wasn’t the same as what the players wear. Especially when you could buy 2 replicas for the same price as 1 retail authentic.

A whole different story began in 2017 after Adidas took over. When Reebok was producing both the retail authentic and premier replica jerseys, the prices were $299 and $149, respectively, and the fit across all versions was consistent. Today, Fanatics produces replica jerseys for the NHL while Adidas offers an “authentic”. But now that Adidas and Fanatics are competing for your dollar, the price difference is much narrower at $129 for Fanatics and $179 for Adidas. And the quality of each jersey has dropped significantly along with those prices.

Fanatics-produced jerseys are nowhere near the same as the real deal. Some fans prefer the Fanatics replica, claiming it’s a better fit and made from a softer material. After trying one on, I can confirm it does feel softer. As for fit, there are wild inconsistencies, but that seems to be the case with nearly all Fanatics-branded apparel. The Fanatics replicas aren’t horrible as long as whoever does the heat pressing of the name and numbers knows what they’re doing. But they often look more like sweatshirts than jerseys due to their graphic sublimation process. The Fanatics replicas also don’t feature the dimples on the shoulders or the shiny chrome NHL shield on the collar.

Unfortunately, retail authentic Adidas jerseys aren’t much better than Fanatics. While the fit is generally more consistent with Adidas, the problem is the cut is nowhere near pro stock. As seen in the images below, the neck hole and waistline are far wider than pro stock and are NOT flattering to the wearer. Another issue Adidas has is material thickness. Adidas retail authentics, initially called Adizero, then Climalite, and eventually AeroReady, are about half the thickness of an actual pro stock jersey. I suppose that’s why so many of their models are wearing hoodies in their marketing images… because the neck holes are so large and the jerseys are so thin. 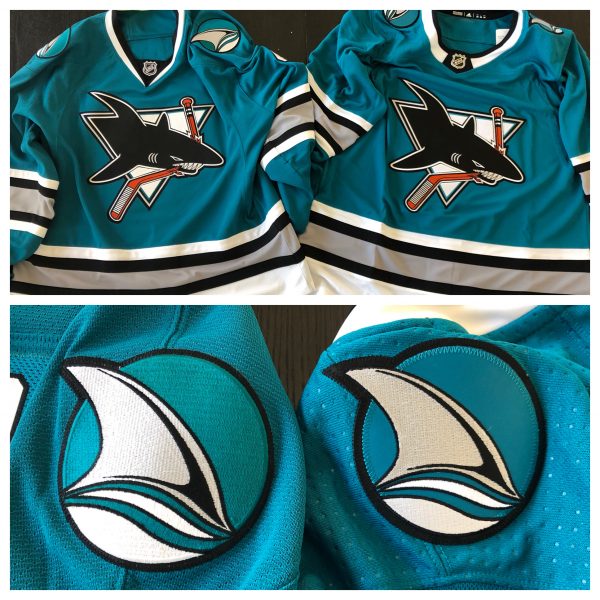 In the image, you can see the Reebok jersey features a fully embroidered patch while the Adidas jersey has a piece of twill with some detail embroidery over the top of it. In my opinion, the fully embroidered patch looks much classier and more professional. Also, while you can’t see it from the photo, the Reebok jersey is much heavier than the Adidas version and just feels to be a higher quality. It’s almost like comparing a sweatshirt to a t-shirt. During the Reebok era, the pre-made Sharks jerseys also used tackle twill names and numbers while jerseys that come straight from Adidas through their online store or NHLShop.com feature cheap vinyl kits.

Now let’s take a look at an Adidas retail authentic next to the pro stock players wear.

You can immediately notice the difference in the shoulder dimples. The overall quality and look is so much better with the pro stock. The material and stitching of the made-in-Canada pro stock is also leaps and bounds ahead of the Indonesian-made “authentic”. Sadly, the retail authentic jerseys that Adidas sells look and feel closer to knockoffs from China than pro stock, as you can see in the comparison photo below.

Stop Calling Your Jerseys “Authentic” And Give Us Pro Stock!

I reached out to Adidas to get their response as to why the sizing, fit, and materials of the made-in-Indonesia jerseys are so vastly different from their pro stock counterparts. While politely declining to discuss these concerns, the response was “it is our standard policy to not comment on product strategy at this granular of a level”. That response seems like a cop out to me. I think fans that spend their hard-earned cash collecting jerseys deserve to know why their retail “authentic” jerseys are such poor quality when compared to Reebok and why pro stock jerseys aren’t available in retail channels.

There’s no reason Adidas can’t make pro stock jerseys available to fans just as it was prior to 2007. It’s understandable that Adidas wants to offer a jersey at a price point competitive with Fanatics, but it’s disingenuous and misleading for Adidas to call them “authentic” or “authentic pro”.  At the end of the day, Adidas needs to call those jerseys what they are… replicas. And Adidas needs to give fans the option of buying pro stock jerseys again.

For another comparison breakdown between Fanatics, Indonesia-made, and Canada-made, check out these photos at Liberty Bell Jerseys.