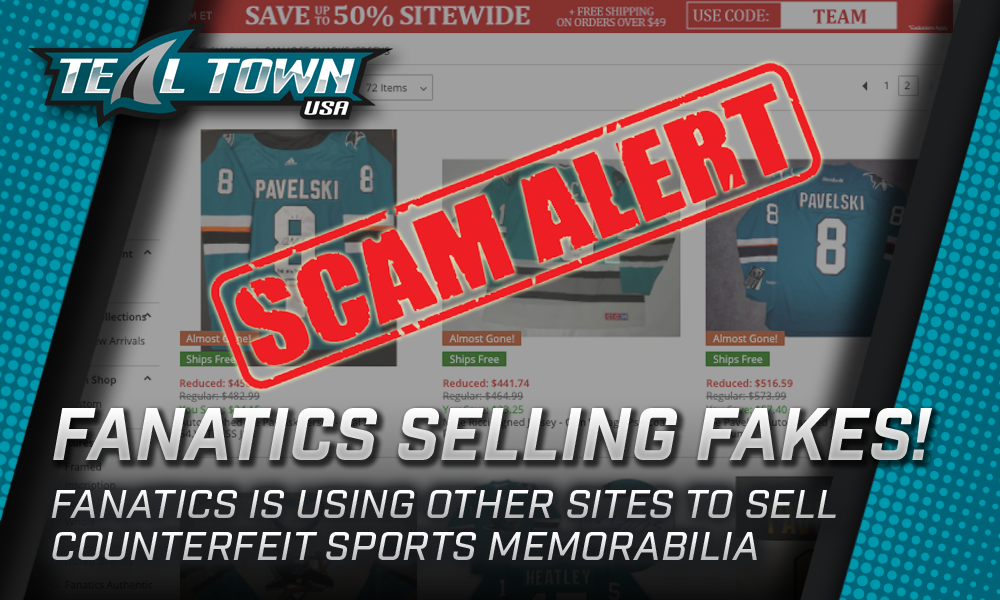 Most visitors to the TealTownUSA website or listeners of our podcast know we are not Fanatics fans. We find their designs uninspired and homogenized, their product quality is abhorrent and inconsistent, and the lack of attention to detail is documented almost daily on social media. While the product on the various online outlets they manage such as shop.nhl.com, nflshop.com, and mlbshop.com are licensed and authentic, Fanatics owns other sites that are selling counterfeit sports apparel.

Since we’re known for being fanatically anti-Fanatics, people on social media regularly send us horror stories and photos about their Fanatics orders. Whether it’s jerseys with the wrong number font, a backwards nameplate, or shirts that seemingly fall apart after a single wash, the stories keep on coming. Until now, all the Fanatics merchandise featured in the photos sent to us were at least authentic, even if it took buyers months to receive their orders.

This latest horror story was sent via Twitter. They posted photos of a licensed and genuine replica Reebok Premier San Jose Sharks Joe Pavelski jersey purchased at the Sharks Store next to the “authentic” Premier jersey just bought from SportsMemorabilia.com. The jersey from Sports Memorabilia is a blatant fake as you can see in the photos from the tweet.

@TealTownUSA how you like this wannabe Pavelski jersey i got from SportsMemorabilia for a bday present? No nameplate, wrong font, wrong numbers, no captain patch. Total scam but i got my $460 back. Worse then Fanatics, right? Check out the pics next to my legit jersey. pic.twitter.com/D6Hus3o86B 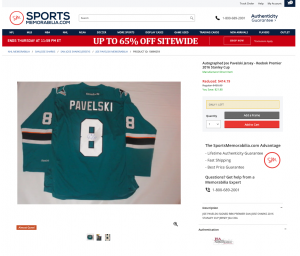 We found the site listing and the jersey they advertised reads “Autographed Joe Pavelski Jersey – Reebok Premier 2016 Stanley Cup”. While the jersey appears to be legit in the poorly lit photos, the customization renders it fake once you see it in-person.

SportsMemorabilia.com did issue a full refund after being informed the jersey was not authentic. Despite SportsMemorabila.com admitting the jersey did not meet their authenticity guarantee, they’ve relisted the Pavelski jersey back for sale on their website at the same price!!! This proves they are knowingly and purposely selling fake merchandise.

While the jersey itself appears to be an authentic Reebok Premier replica, no licensed retailer could sell this as legit with the clear inaccurate lettering and patch, despite their Authenticity Guarantee. Notice that their guarantee is not promising that the autograph is authentic, but that the “memorabilia and collectible” is genuine. 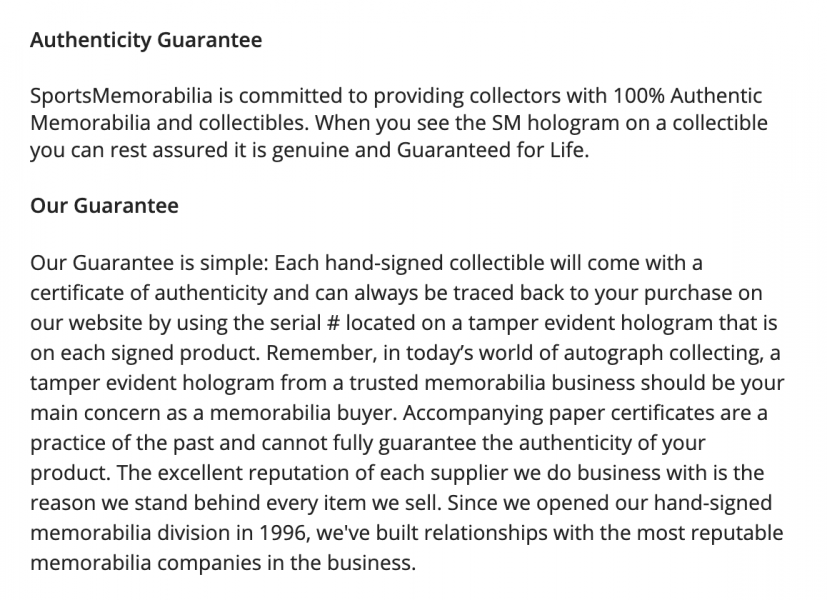 Now, you might be asking yourself “what does this have to do with Fanatics?” The answer is Fanatics owns and runs SportsMemorabilia.com.

At the bottom of every page on SportsMemorabilia.com, it reads “Fanatics, Inc., All Rights Reserved. No portion of this site may be reproduced or duplicated without the express permission of Fanatics, Inc“. Also, a quick check of the domain name registrar shows the site is registered through the same company.

“We rely on the listings of our trusted 3rd party sellers“

During the return process, when asked why the jersey wasn’t authentic despite the website guarantee, we’re told the customer rep on the phone call responded “We rely on the listings of our trusted 3rd party sellers”. This excuse is a cop out. Fanatics is running the site and telling customers each item is guaranteed. It’s the responsibility of Fanatics to validate each item and verify the authenticity and failure to do so is negligent.

After digging deeper into the site, we came across several laughable and obvious fakes. Have a look at some of these more noticeable counterfeit jerseys still available on SportsMemorabilia.com. Notice that every page features their “Authenticity Guarantee” in the upper right corner. Pay particular attention to the prices. 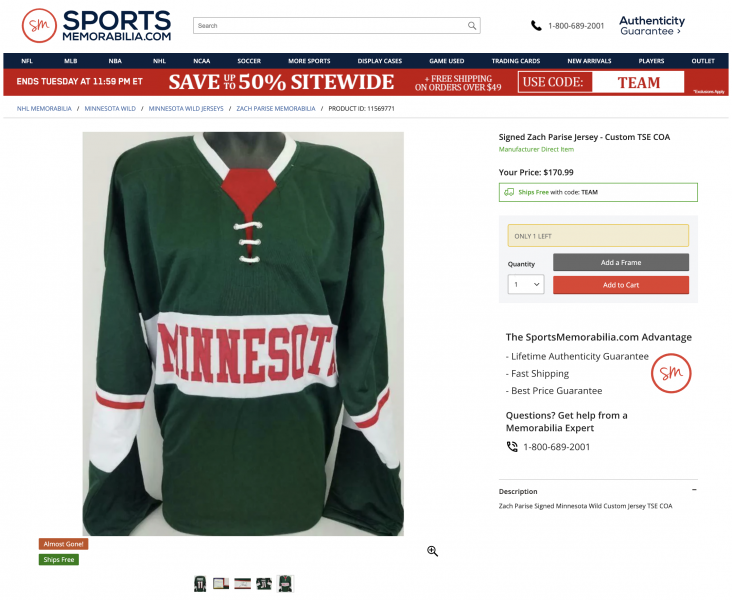 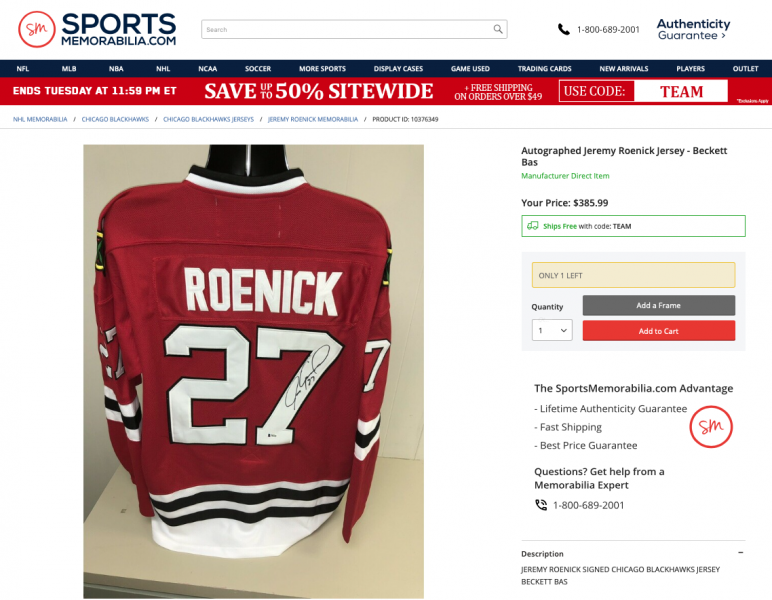 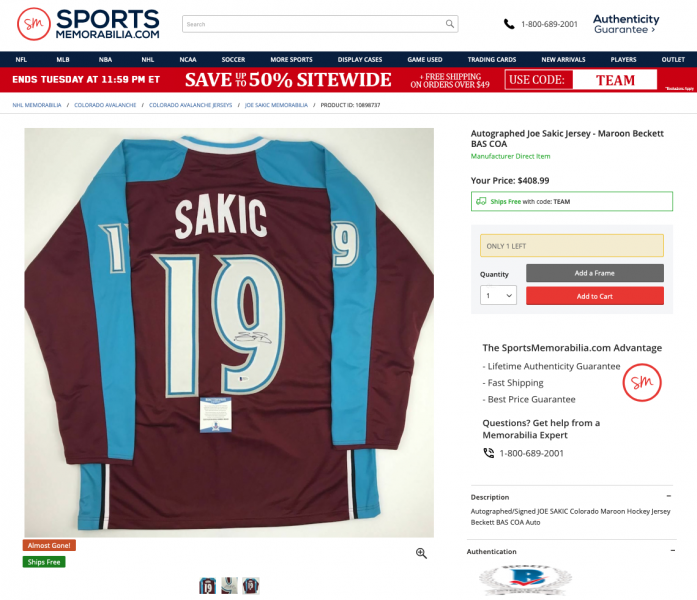 And here is a short list of more fake NHL jerseys we found:

FYI, the Roenick jersey shown above is also listed on eBay, at a substantially lower cost.

Not Just The NHL

While it’s obvious the Taylor listing is fake by the nameplate alone, the Romo one is comically bad. The Giants wear cream jerseys, not white. Only their grey away jerseys feature “San Francisco” across the front and the font they use is totally different from this abomination. If you think that’s bad, pay particular attention to two Romo jerseys available to purchase. 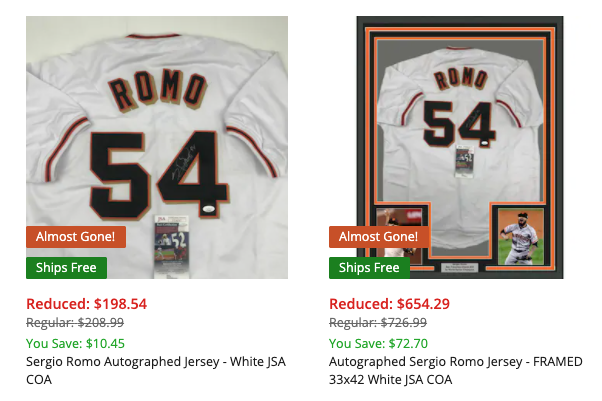 SportsMemorabilia.com is selling two different Romo jerseys on their website, but they’re using the same photo for each listing. Compare the non-framed jersey photo with the framed jersey photo and you will find it’s the same jersey with a frame photoshopped around the first photo. This is some of the most unethical and deceptive business practice we’ve ever witnessed. How is this legal? How can a fan expect a jersey or autograph to be legit when they’re using 1 photo to sell multiple jerseys? Fanatics is purposely defrauding the consumer!

Fanatics is not only using SportsMemorabila.com to sell counterfeit swag on unsuspecting fans, but Fanatics owner Michael Rubin also purchased, and is using, the once reputable SteinerSports.com. Have a look at two completely different counterfeit Evgeni Nabokov jerseys recently for sale on both of these sites. 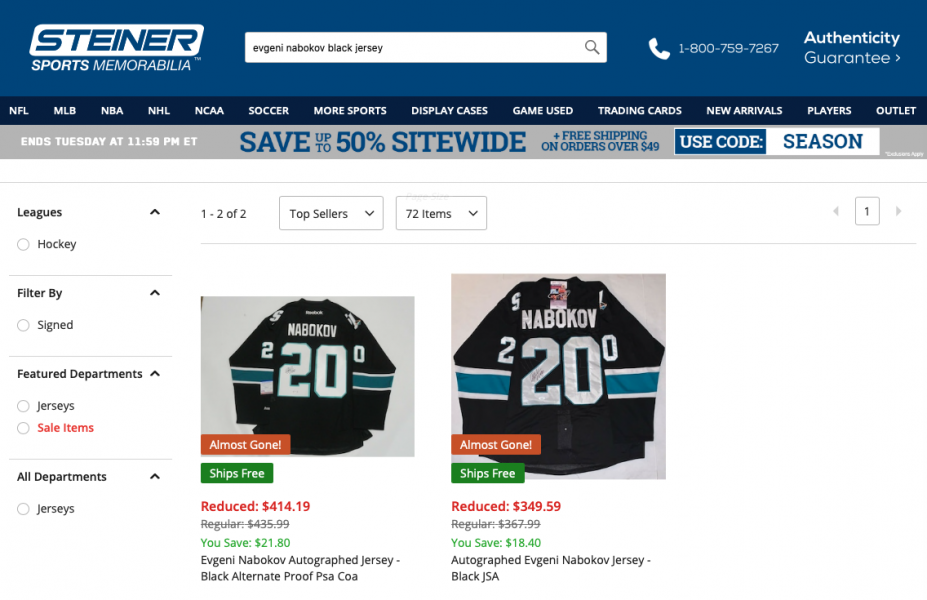 As you can see from the photos, these are blatant fakes. The one on the left is slightly better because at least the jersey looks like it might be a legit replica jersey and the correct font is used. However, the teal outlines on all the numbers are the wrong shade and off-aligned. The one on the right is just laughable as the number font and materials are wrong and they use the ticket stub in the photo to hide the logo. When the consumer is being asked to shell out over $400 for an autographed jersey, shouldn’t the consumer expect the jersey to be authentic? No licensed reseller could legally sell these jerseys. 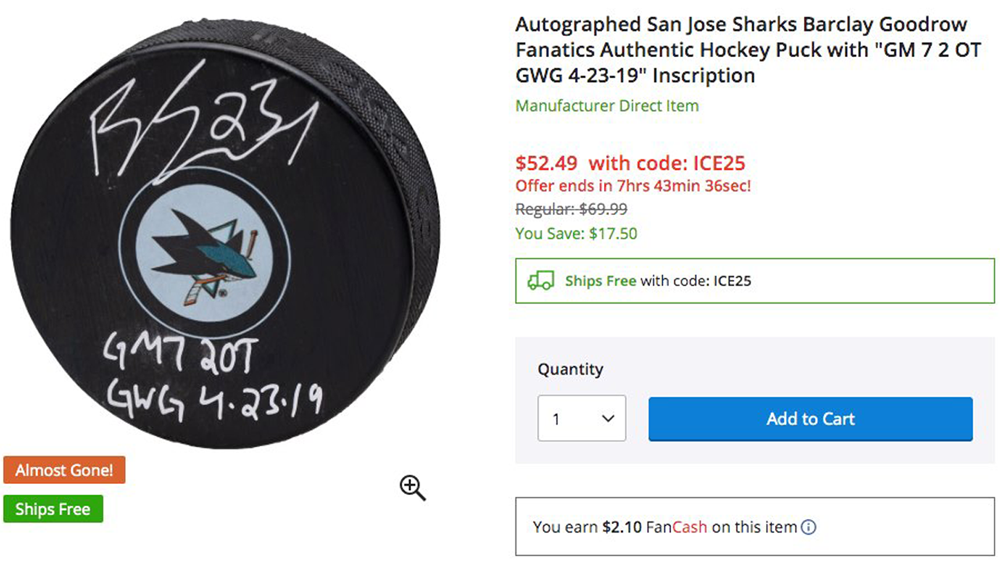 For those fans that might be unaware, Barclay Goodrow scored the game 7 winner in overtime, not double overtime. When you score the biggest goal of your career, you remember every little detail. If you can’t get a simple detail correct and ask a player to purposely write the wrong thing, what else are you screwing up?

Despite the fact that 99% of their replies on Twitter are apologies, it’s clear Fanatics doesn’t care about Fans. While the product they produce is substandard, at least it’s licensed and official. The fact that they are knowingly and purposely using other sites to sell fake jerseys, and other memorabilia, that take advantage of unsuspecting fans is inexcusable and fraudulent.

Any teams and leagues working with Fanatics should immediately look into terminating their contracts with this monopolistic, unscrupulous and deceptive company.