Change is in the air in San Jose and not just with the Barracuda.

According to Twitter user, @AliMurji, the San Jose Sharks are about to make a uniform change for the first time since 2013.

The @SanJoseSharks will be issuing a rebrand for the 2023-24 season a team source tells going mainly teal. pic.twitter.com/y2GRgRXRAO

Ali’s tweet shows new mockups of home and away uniforms for the Sharks. These jerseys have something old, something new, (thankfully not something blue) to them. The cell phone image is from the Adidas design team and it’s template.

On the white away jersey, we have the return of the striping from the original jerseys minus the long Pacific Teal cuffs and waist striping that was seen from 1991-1998.  Black numbers with a teal outline on the road threads, a first on a Sharks jersey.  On the teal home jerseys, the striping has been inverted where the black is the outer stripe and white is the inner stripe. Both jerseys have no tie neck, just a clean black collar with a thin teal accent. The numbers are the traditional white with black outline. Yes, the numbers look familiar, they should. It is the same font as seen on the new San Jose Barracuda jerseys.

While the original striping style is the basis for these new jerseys, there is no grey to them. As for many Sharks fans, the elimination of orange is welcomed, albeit the logo still has the warm hue. Speaking of stripes, waist stripes return. The Sharks removed them to reduce weight on the heavy Reebok Edge jerseys worn from 2007-2013.

But the most significant change are the pants, gloves and the home helmet.  For the first time, they are all predominantly teal. Something we have never seen before.

Now, let’s go deeper into the image.  It shows the title with “New Home & Away with Teal Gear”.  This could mean a number of things.  First, a mockup of black helmets, pants, and or gloves is likely out there and not shared with the source to give options.  Could that mean the Sharks could alternate between teal helmets and gloves and black helmets and gloves?  This is the rage in the professional and college football mixing multiple parts of to create an array of uniform combinations.  NHL teams have tried this a little bit with the Vegas Golden Knights and Nashville Predators wearing alternate helmets over the last decade.

There were some who questioned the validity of the image. That is a template used by the Adidas design team. Those who have seen the leaked images of the Chicago Blackhawks Reverse Retro have seen the similar template of the player in motion.

A source within the Hawks org has told me that this jersey is CONFIRMED to be the Chicago Blackhawks Reverse Retro 2.0 Jersey. Thoughts?@icethetics @GTAC13JERSEYS pic.twitter.com/hhGC25l37Y

A full teal uniform isn’t unique to the NHL, let alone the Bay Area. The California Golden Seals wore all teal from 1974-1976 prior to relocating to Cleveland. Ironically, those uniforms are rumored to be the basis for the upcoming Reverse Retro jerseys for the Sharks, thus making it easier to wear the teal pants and gloves. 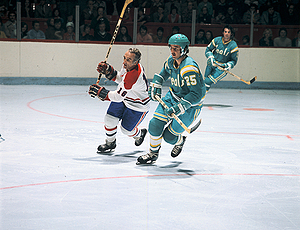 In the tweet, Ali Murji mentioned this is for the 2023-24 season. Could be easy to speculate that the jersey number is 22 and perhaps it is a secret to be unveiled for the 2022-23 season? Icethetics seems to thinks so in their retweet.

Icethetics source confirms this #SJSharks redesign is legitimate. Open question is whether they’ll use it this coming season or delay as Ali reports. https://t.co/Q9PiclMs7t

Icethetics in their “Flash Report” suggested a popular “Easter Egg” is coming to the home and road uniforms.  The embedded pattern as seen in the black Stealth jersey with the circuitry between the stripes.  Perhaps it’s a different pattern this time around.  As we mention Stealth, it is unknown if it returns this season or takes another season off with at the very least, new jerseys like the Seals inspired Reverse Retro in the rotation for 2022-23.

Another suggestion comes from those numerals.  It has 22 on them, for the year 2022.  When the Reverse Retro 1.0 came out, the jerseys had 20 on them for 2020.  When Stealth debuted, Adidas previewed the jersey with 18 on the back for 2018.  While Ali originally tweeted these jerseys are likely for 2023-24, Teal Town USA along with what Icethetics have reported can say, it is possible for the Sharks to unveil these for this season.

It is late in the unveiling jersey season, however, the Sharks have unveiled jerseys right before the season.  Most recently, there was Erik Karlsson unveiling the Stealth jersey during a preseason game in 2018.  When San Jose unveiled the Reebok Edge jerseys, they were the last team to unveil just hours before the Teal and White Scrimmage in September 2007.

A further deep dive shows the Sharks Pro Shop tweeted last week, that along with expanded hours, it promoted that “lots of new merch” is coming this week.

The original image Ali tweeted was tough to see detail, so I made a mockup of the jerseys themselves.  You can barely see a new, shoulder patch, that looks like a white variation of the classic circle fin alternate logo with potentially a black fin, but we can’t confirm it’s accuracy. 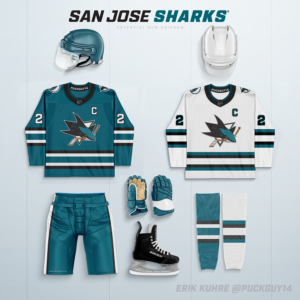 Overall, this looks crisp, it’s a classic look without going back to the original.  Get ready to have this be on your holiday shopping list!  What do you think?  Share your comments down below.