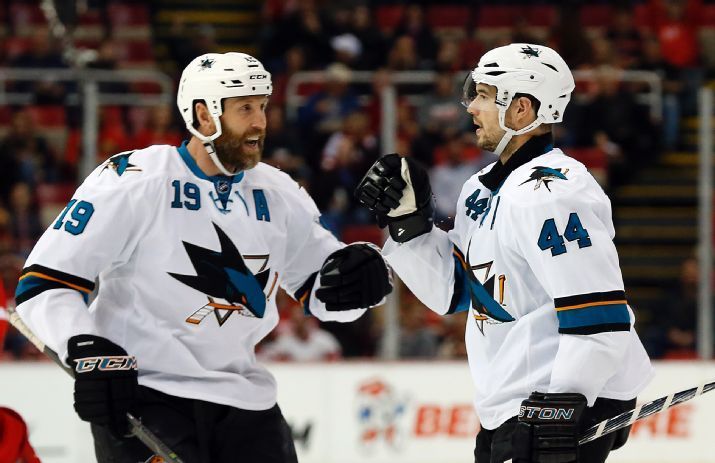 While the Sharks didn’t do anything mindblowing to start free agency they were busy. The Sharks started the day by extending to important pieces on long-term deals in Marc-Edouard Vlasic and Martin Jones. They also parted ways with their enforcer and some AHL talent before resigning Joe Thornton. Patrick Marleau, however, remains unsigned as of this writing.

The rumored long-term deals for both Marc-Edouard Vlasic and Martin Jones became a reality today. Martin Jones scored a six-year deal that carries a cap hit of $5.75 M AAV. Jones is 72-46-10 over 130 games with the Sharks in two seasons. He has a save percentage of .915 and a 2.33 GAA. The numbers don’t suggest much more than a league average goalie, but his cap hit is in the same ballpark as players like Marc-Andre Fleury, Pekka Rinne, Cory Schnider, Jimmy Howard, Corey Crawford, and Mike Smith. The deal will see Jones in goal for San Jose until he is 33 and has a 3 team limited no-trade clause.

The deal will see Jones in goal for San Jose until he is 33 and has a 3 team limited no-trade clause. In order to be worth the deal long term Jones will need to improve on his consistency and league average numbers. However, we have seen Jones be the best shark on the ice some nights so it is a roll of the dice worth taking.

Marc-Edouard Vlasic signed a seven-year deal that carries a $7 M AAV for eight years. This will tie up a combined $15 M dollars of cap space between him and Burns for the immediate future. Vlasic signs with the only pro team he has ever known playing the toughest minutes of any Sharks defender. The deal also carries $14 M in signing bonuses including $5 M dollars in lockout protection for the 2020-21 season. While not a huge points contributor, Vlasic’s defensive prowess has earned him a spot on Team Canada at 2014 Olympics. Team Canada would put on one of the best defensive showings ever in the tournament.

As with Burns, I’m not sure how I will feel about this deal when it is over but for now, it’s fine.  Why worry today about what you can panic about tomorrow.

The biggest questions facing the Sharks in free agency was would the duo of Patrick Marleau and Joe Thornton return. Today we got half of the answer when it was announced that Joe Thornton was, in fact, returning for at least one more year.  No official details have been released so far but it is expected that the one-year deal will carry a $6.5 M pay day. The money does not really bother me because the term is so short. We don’t know what Joe Thornton will look like this year after his surgery. If Thornton’s play drops off considerably than the Sharks can walk away when the year is over.

Most of the free agents that may have softened the blow of Thornton’s departure were gone early in the day. Unless you believe the rumors of the Sharks nabbing a Matt Duchene or John Taveras this was the best move they could make. I like this deal, it’s a low-risk high reward situation for the Sharks who could not really afford to lose him.

Sharks enforcer and fan whipping boy Micheal Haley signed a two-year deal with Florida Panthers. With the emergence of up and coming players who can fill out the bottom six for the Sharks, not resigning Haley should come as no surprise. The question now is will the Sharks sign another player to fill his role on the team. Doug Wilson has usually had a player of Haley’s ilk in the lineup as long as he has been here. Names like Mike Brown, John Scott, Jody Shelly and Scott Parker have all called San Jose home under his watch. I personally think this will be interesting to watch over the summer. Haley scored 2 goals and 10 assists in 58 regular season games with the Sharks last season.

The Sharks boosted their organizational depth in goal by signing former Toronto Marlies goaltender Antoine Bibeau. Bibeau was drafted in 2013 in the 6th round (172 overall) by the Maple Leafs. There is nothing in Bibeau’s pro numbers to suggest that he will pan out to be an NHL starter but at the age of 23, it would be unwise to rule him out as a backup. This is a great show me deal for Bibeau who should provide stability in the Barracuda’s backup position. The Barracuda struggled to find steady backup goaltending this year as Mantas Armalis failed to impress and Clarke Saunders didn’t appear to be the answer. If Troy Grosenick should be called up Bibeau should be able to provide stable goaltending in his absence as the starter.

The Baracuda parted ways with a few players who moved on to greener pastures. Alex Gallant who found his way into the AHL from the ECHL signed a deal with the Tampa Bay Lightning and will suit up for the Syracuse Crunch. Galant was a part of a gluttony of enforcers for the Barracuda along with Zack Stortini and Dan Kelly. While his antics could be entertaining, they also cost the team on a few occasions as well with ill-timed penalties and suspensions. In 29 games with the Barracuda Gallant had 2 assists and 126 penalty minutes the most on the team.

Buddy Robinson also moved on to greener pastures signing with the Winnipeg Jets. Robinson joined the team midseason with Zack Stortini in the trade that saw the Senators acquire Tommy Wingels. In 30 games Robinson scored 10 goals and 9 assists in 33 games. Robinson was a nice addition to the team and also added another 9 points during the playoff run. While his NHL upside is certainly questionable he was a player who I really enjoyed watching on the Barracuda and he will be missed.

Be sure to catch Teal Tinted Glasses as we will break down all this and more tomorrow at 7:30 PT!