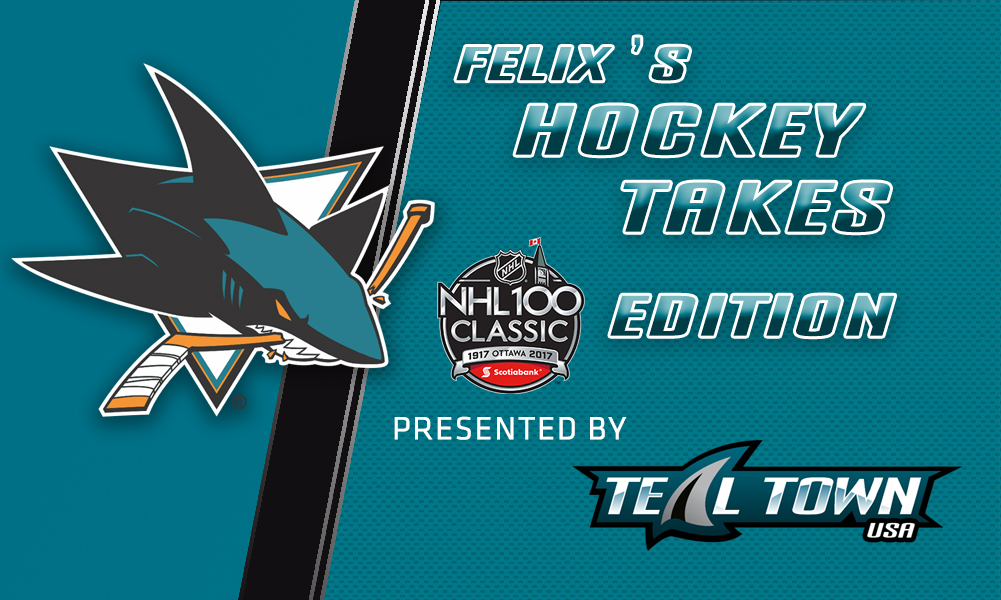 I’ll touch briefly on the San Jose Sharks’ really bad addiction to falling behind early and trying to make a comeback at the end, evidenced in last night’s game against the Vancouver Canucks which unfortunately ended in an overtime loss. I’ll also talk more in-depth about the Ottawa Senators‘ situation, specifically my take on the Erik Karlsson trade rumors as well as what in the heck Senators owner Eugene Melnyk was thinking throwing their fan base under the bus and not keeping his mouth shut about possibly relocating the team on the eve of the NHL100 Classic outdoor game against the Montreal Canadiens.

San Jose Sharks Close To Being the New Comeback Kids, But Not To Be

If you saw the game last night, you know that the Sharks had just an absolutely atrocious first period, and I mean ATROCIOUS. They gave up a power play goal to Markus Granlund, and while the Canucks didn’t score again until 14:27 into the opening frame on Granlund’s tally of the night, Martin Jones had to be strong in net as the team in front of him was just not skating and the defense was hanging him out to dry. Brent Burns had the only Sharks tally in the first, and the shots were 22-13 in favor of Vancouver.

Second period was much better, although Brock Boeser scored his team-leading 17th goal of the season. The Sharks were able to cut into the lead again on Marcus Sorensen‘s 1st goal of the year on a rebound.

In the third period, Burns again gets credit for his second goal of the night, Joel Ward with the lone assist. Unfortunately, that would not be enough as Sam Gagne would win it in overtime for the Vancouver Canucks.

I mean… what else is there to say other than you can’t let your goalie work this freakin’ hard? I get it. It’s a back-to-back. They played the Calgary Flames the previous night, but you know what? You have no excuses at this point. This was a Vancouver team you should have been able to handle if you’re the Sharks. The Canucks won because they were outskating and quite frankly, just out-freakin’-playing the boys in teal in just about every faucet of the game except goaltending and faceoffs, because Martin Jones had to be lights out since the team in front of him had to take a whole period just to show up.

I mean the only thing Jones had left to do was ,maybe score a couple goals himself if he could (although that’s probably not the best idea since the last time he tried to score he got scored on). Look, Vancouver played a really good game overall. They played like they wanted the puck much more, and I don’t blame them considering they’d given up 12 goals (together against the Winnipeg Jets and Nashville Predators) in their last two games prior to last night. So, yeah, they had every right to be pissed and frustrated with their games. The Sharks couldn’t match their effort and that level of intensity until later on. That’s unacceptable.

Now, they’ve got today to shake off the loss before moving onto the Edmonton Oilers on Monday to cap off their Western Canada road trip. Let’s see a much better 60-minute effort this time, boys. If you want more analysis than just mine, check out last night’s Teal Town After Dark vodcast with Erik Kuhre and Rocket Backhander. You won’t regret it. Trust me.

So as you all know, unless you’ve been living under a rock the past several months, this year marks the 100th anniversary of the NHL. It’s absolutely wonderful, despite having our gripes with the owners and Gary Bettman and whatnot. But you know what? Today’s a day of celebration for this wonderful sport, because three days from now on Dec. 19th, 100 years ago the Ottawa Senators and Montreal Canadiens took the ice for the very first time in league history. Two other teams, the Toronto Arenas (now Maple Leafs) and the other Montreal team, the Wanderers, also skated for the first time.

Alright, enough of the history lesson, as much as the history nerd in me can’t resist it. It’s supposed to be a warm (yet cold) and fuzzy atmosphere. It’s family friendly. Everyone’s out there having a good time, and then Eugene Melnyk shows up — who as I mentioned earlier is the owner of the Ottawa Senators — and talks to the press about the whole situation with the team, and… let’s just say what came out of his mouth wasn’t pretty.

Q: “Do you have the money to keep the #Sens afloat?”
Melnyk: “For how many centuries? I’m not going to blow a lifetime of working hard on a hockey team.”

More Melnyk: “I think the market here has to prove itself, or you have to make changes. We’ve cut everything to the bone in the organization. We are probably one of the thinnest management groups in the league. The next thing you have to look at is players.”

Melnyk on relocation: “If it doesn’t look good here, it could look good somewhere else. But I’m not suggesting that right now. If you open a grocery store and nobody comes, but one opens two blocks down and there’s a line outside, where are you going to have your store?”

Melnyk: “Here, we’re fighting every day to sell a ticket. Honest to god. And when you get to the 3rd rd of the playoffs and you’re begging people to buy a ticket, something’s wrong with that picture. How long can you underwrite a team? Like literally underwrite. Write a cheque.”

As if things couldn’t get any worse for the Sens, they seemingly are. Look, Melnyk isn’t all wrong. In fact, I don’t think he’s wrong at all especially about the attendance. It’s no secret that the Ottawa Senators struggled trying to put butts in seats even during their incredible playoff run last year that almost got them to what would have been only their second Stanley Cup Final in the modern era. It was actually quite embarrassing. I felt bad for them and their fan base to be quite honest. At the end of the day though, is this really a good time to say the things he said? When you’re trying to promote your team, in a league that’s bad enough at marketing its own game, I don’t think so. It just leaves a bad taste.

Also, if you’re an owner of a team, you want to do everything you can to reassure your fans that everything with your team is doing okay even if it isn’t, and if it isn’t you want to fix it quick. Melnyk not only doesn’t want to sell the team but he seemingly doesn’t care about Ottawa. I don’t know what goes on in his head, but that’s not a good ownership mentality. Just because the captain, Erik Karlsson, didn’t want to take a hometown discount in next extension doesn’t mean you should be all upset about it. Sure, your team hasn’t been doing well recently, but do you really want to trade your captain, your franchise player whom you’ve coveted all these years? Heck, there are 30 other teams in this league who wouldn’t mind taking Karlsson off your hands if you really do trade him.

I just think with the Matt Duchene trade and how he wants to win some playoff games, it seemed like Ottawa might turn things around but it’s done the exact opposite. And with the Erik Karlsson trade rumors swirling, I don’t know which direction this team’s headed other than down. I don’t know what they wanted to do, but it’s a darn tire fire over there.

I’ll be watching the outdoor game for sure. I hope both Habs and Sens fans can and will enjoy the game, as well other fans who will be watching. But, this is not good.