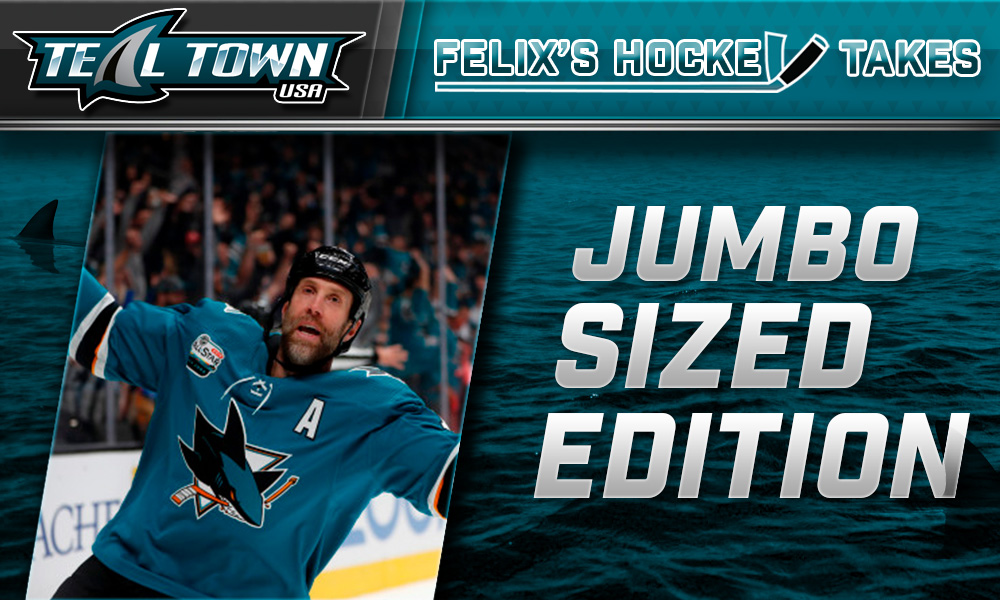 San Jose Sharks and former Boston Bruins forward Joe Thornton recently passed former NHLer Gordie Howe in All-Time Assists. The 39, soon-to-be-40-year-old, forward now sits in sole possession of 9th place. It is just one of many milestones he has accomplished in his illustrious 21-year NHL career, 14 of them in teal.

Here are the milestones that Thornton achieved in a blowout win against the Vancouver Canucks on February 11th:

For most hockey fans, including yours truly, the man they call “Jumbo” is a first-ballot Hockey Hall of Famer. Thornton should be going into the Hall of Fame when he hangs up his skates.

I still remember Sharks TV play-by-play Randy Hahn calling Jumbo’s 400th goal scored against Nashville earlier this year, in which he pointed out other milestones, such as 1500 games and the 1000 assists marker that was achieved last year.

At this point, we’re all used to this by now. Especially this year, Joe Thornton’s checking off each milestone like he probably checks off his off-ice to-do list every day. For a special player like him, this is natural.

I remember reading an article from The Athletic’s Kevin Kurz about Jumbo’s path to 1,500 games in the NHL. It’s really interesting. I remember reading that the St. Thomas, Ontario native had started out as a defenseman in youth hockey, not the playmaking forward that we’re used to seeing. He started out on the blueline and was chosen to replace a fellow teammate who played center. The kid had a broken finger. From there, as Kurz wrote, “the rest is history”, and it truly is.

To see someone blossom from a kid who wore no. 2 as a defenseman, in honor of former Montreal Canadiens D-man Doug Harvey, to someone who wears the same number as NHL legend and former Tampa Bay GM Steve Yzerman and went first overall to the Boston Bruins is pretty special in and of itself. But for us Sharks fans, of course the blockbuster trade that went down for GM Doug Wilson to acquire Thornton for San Jose, is undoubtedly a moment this fan base will cherish for a very, very long time.

As it stands, according to Hockey-Reference (assuming they’ve updated their lists), here are where Thornton stands below all time in assists, points, and games played. I’ve filtered the lists to include just the top 20.

As you can see, the only one of those three he doesn’t have former Shark Patrick Marleau beat is in games played. But honestly, Joe Thornton has had such an amazing career. Yeah, he may have slowed down a bit over the years. The league is getting younger. That makes him more vulnerable to get skated (unless he’s backchecking his butt off against Evgeni Malkin on a breakaway apparently). However, his hockey IQ is still there, and his passing plays are still unbelievable.

The fact that Jumbo Joe was left off the NHL’s Top 100 list is an absolute joke. The only reason Chicago’s Duncan Keith is on that list instead of Joe Thornton is because Duncan Keith won a Cup with Chicago. That’s really the only thing Thornton’s missing from his resume, and likely the only reason he’d ever be excluded from the Hall of Fame if he ends his career without a Stanley Cup.

We all know that Thornton’s time in the NHL is up soon. Thus, his tenure as a Shark is one to be cherished. I’ve asked a few friends to chime in on their favorite Jumbo moment.

(Note: All of these responses were taken from Instagram as I’ve taken a brief hiatus away from Twitter.)

@thejudyboo says that while she has many, her favorite would have to be Thornton’s 400th NHL goal which, as mentioned, was scored against the Nashville Predators. (I have the video posted earlier in this article.)

@j.l.v23 says her favorite Thornton moment has to be his first NHL hat trick against his former team on Monday night “in eight years”, to quote Randy Hahn from the live telecast.

His last hat trick before then? October 27th, 2010 against the New Jersey Devils.

@4pawsup4hockey says she loved that Jumbo Joe was willing to put the team first and play third line minutes when the coaching staff asked him too. We all remember the days of Thornton centering that top line with so many linemates on his wing over the years, including Joe Pavelski, Patrick Marleau, Devin Setoguchi, Jonathan Cheechoo, etc. She further talks about how Thornton “sees this sport as it should be, about respect, fun, sportsmanship, team and brotherhood”.

Honestly, she’s bang on. If you find any interview that Thornton has been involved in over the years, he has about the nicest personality you will ever find in a hockey player. I’m not even exaggerating. Joe Thornton is as humble of a hockey player as they get. Ask him about a milestone he achieved, and he’ll say “yeah, it feels great to get the milestone” and then give credit to his teammates. He’s such a team player and it’s great to see.

Finally, @gigicesaresupport (who was the only non-Sharks fan I talked to for this article) says his favorite Thornton moment was his 1000th assist.

Now, there are obviously those who don’t like Jumbo or think he’s overrated. For those who do still recognize him as one of the greatest playmakers to ever lace up the skates, even if they for some reason just don’t like him, great! For those who are just plain critical of the guy and think he doesn’t deserve to be in the NHL Top 100 or the Hockey Hall of Fame because — as I mentioned — they think he’s overrated, … I honestly don’t know what to tell you.

The man’s a legend in the League and even more so in San Jose. Let’s hope the boys in teal can win a Cup for him this June.