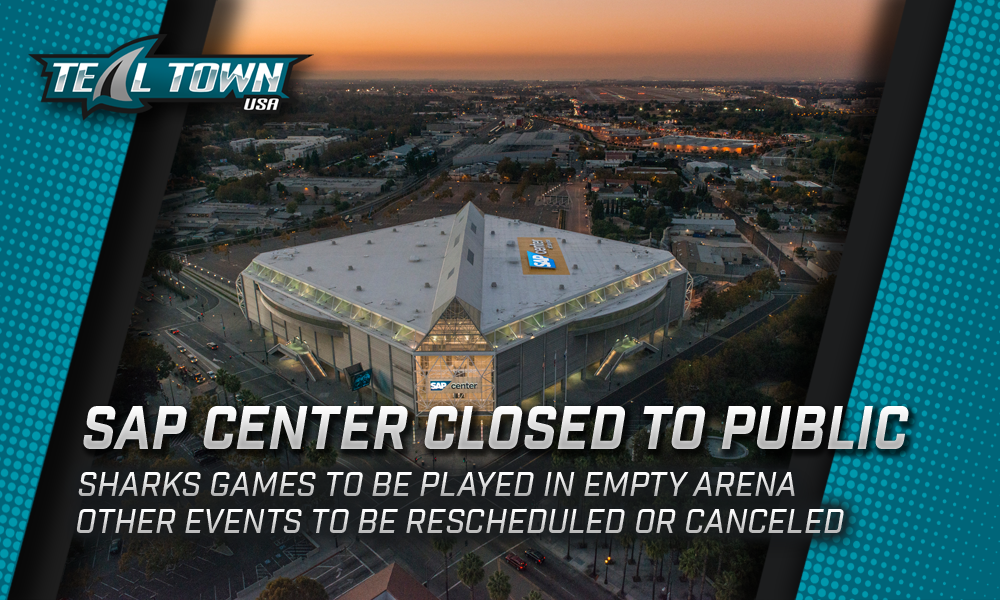 After a wave of previous coronavirus announcements over the last week, the San Jose Sharks and SAP Center have officially announced the arena will be closed to the public through the end of March. This means Sharks games scheduled to be played against the Montreal Canadiens (Mar 19), the Boston Bruins (Mar 21), and Arizona Coyotes (Mar 29) will be played in an empty arena as we previously reported.

No details have yet been provided as to how the Sharks will address the promotional items that were tied to the impacted games. The Mar 19 game featured a screaming shark sculpture promotion item. The Mar 21 game was set to include a shirsey giveaway for all fans in attendance and a warm-up jersey auction.

San Jose Barracuda games scheduled on March 17 and March 22nd against Colorado and Bakersfield will also be played without fans in attendance. Previously scheduled events including Tony Robbins (Mar 12-15), Marc Anthony (Mar 20), and Cirque du Soleil (Mar 24-28) will be rescheduled or canceled altogether.

All three San Jose Sharks games (March 19 vs. Montreal, March 21 vs. Boston and March 29 vs. Arizona) will be played as scheduled at SAP Center but will be closed to the general public.

Admission to games will be limited to home and visiting club personnel, approved credentialed media and broadcast partners, essential club and arena staff, and NHL officials.

All three Sharks games will be broadcast on television on NBC Sports California and via audio feed on the Sharks+SAP Center app, 98.5 FM KFOX and the Sharks Radio Network.

The same policy will apply for the San Jose Barracuda games scheduled for March 17 vs. Colorado and March 22 vs. Bakersfield.

The ticketing department will work with ticket holders on appropriate credits or refunds for these affected games. Single-game buyers will receive a refund through their point of purchase. We will be communicating to ticket holders, partners and other affected parties with additional information soon.

The safety of our fans, guests and partners is of the utmost importance. Sharks Sports & Entertainment and SAP Center management greatly appreciate your understanding during this unprecedented time.