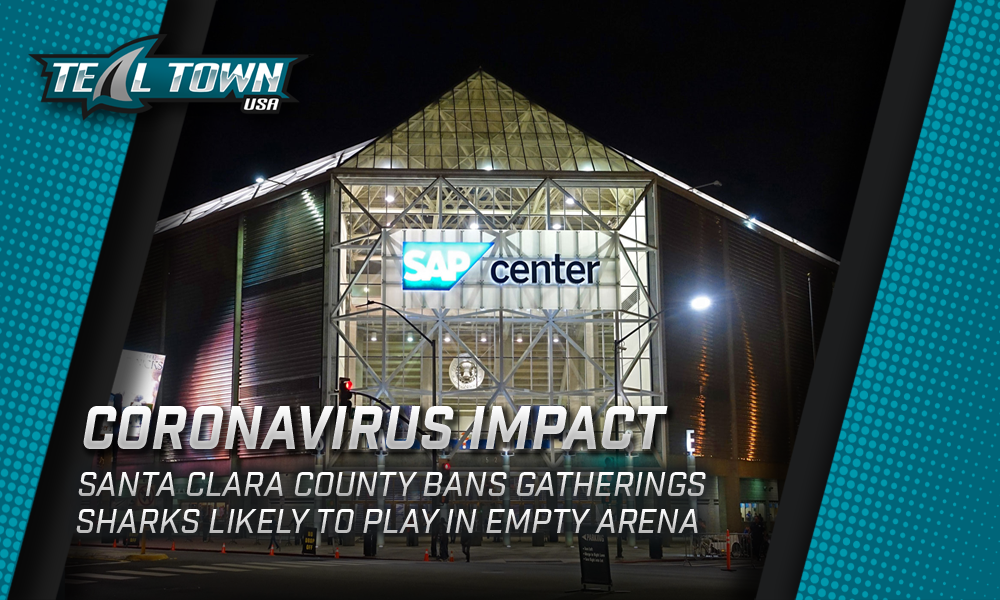 On Sunday evening, we broke the news that Tony Robbins had cancelled events planned to occur at SAP Center March 12-15, due to the CoronaVirus.

Reports are Tony Robbins has cancelled his March 12-15 events at SAP.

Less than 24 hours later, it appears a lot more postponements and possible cancellations are forthcoming. Earlier this evening, the Santa Clara Dept. of Public Health announced a legal order barring all mass gatherings of 1,000 or more people through the end of the month, enforceable by Santa Clara County Sheriffs and police. This ban is an effort to “increase the social distance to slow spread of COVID 19 aka coronavirus”. Santa Clara county is home to nearly two million people and includes the cities of San Jose, Santa Clara, Sunnyvale, Mountain View, Palo Alto, Cupertino,  Campbell, and Milpitas among others.

Between now and March 31st, the Sharks have 3 games scheduled to be played at SAP Center. Based on the barring, games against the Montreal Canadiens (Mar 19), the Boston Bruins (Mar 21), and Arizona Coyotes (Mar 29)  will be impacted. SAP Center has said it would follow the Santa Clara County guidelines and assess each event remaining on its March schedule. There appear to be 4 options.

NHL is aware of the Santa Clara County ban on large gatherings. They are looking at all options, which are the following, in no particular order:

The most obvious solution is to play in an empty SAP Center. The cameras and technology required are obviously already in place and nothing would need to change. Of course, the primary issue with this option is refunding ticket purchases for those games. However, the Montreal game featured a promotional package that included a Sharks sculpture. While the promotional item can be shipped to the purchaser, the ticket cost would require a refund. Likewise, the game against Boston featured a Uprising shirsey giveaway for all attendees and a jersey auction. This promotion can likely be shifted to the April 2nd game versus Dallas if the ban is lifted. If not, perhaps the Sharks hold the promotion back until next season.

The neutral site option seems rather vague. Does that mean playing at Solar4America Ice? Or does it mean choosing a venue outside of Santa Clara such as the Oakland Arena or Cow Palace, neither of which will provide optimal ice conditions? Either way, both of those venues previous used for Sharks games have events already booked for the dates in question.

Option 3 is simply playing the games at the visitors building. For the March 29 game versus Arizona, this appears to be an easy solution as Arizona is hosting the Nashville Predators the night before. This option also works for Boston as they play in Los Angeles on the 19th and were scheduled to fly home following their scheduled game in San Jose on March 21st.

It’s a much more difficult solution regarding Montreal, who play in Los Angeles two days before the scheduled game against San Jose, and in Colorado two days after. However, the problem for option 3 that affects all teams is that each venue has a previously scheduled event already booked on the evenings required for use. Montreal has a figure skating event booked on March 19, Boston has the Hockey East championship on the calendar on March 21, and Celine Dion is playing in the Coyotes’ barn on March 29.

The least desired, and least likely, must be option 4. The NHL has already begun massive promotions around the beginning of the 2020 Stanley Cup Final. The impact to Montreal is minimal with the Canadiens firmly outside the playoff picture while Boston basically owns the Eastern Conference. However, Arizona is only 3 points out of a wildcard spot. I can’t imagine the NHL wants to skew their planned post-season to make up a couple games when there are other easier options available.

The San Jose Barracuda also have 2 games schedule between now and the end of the month, Mar 17 vs Colorado and Mar 22 vs Bakersfield. Other events scheduled in March on the SAP calendar are Marc Anthony (Mar 20) and Cirque du Soleil (Mar 24-28).

The only statement from SAP Center as of now is that each event will be reviewed. But I wouldn’t get my hopes up to visit the tank for the rest of March. In fact, I would start looking into refund options now.