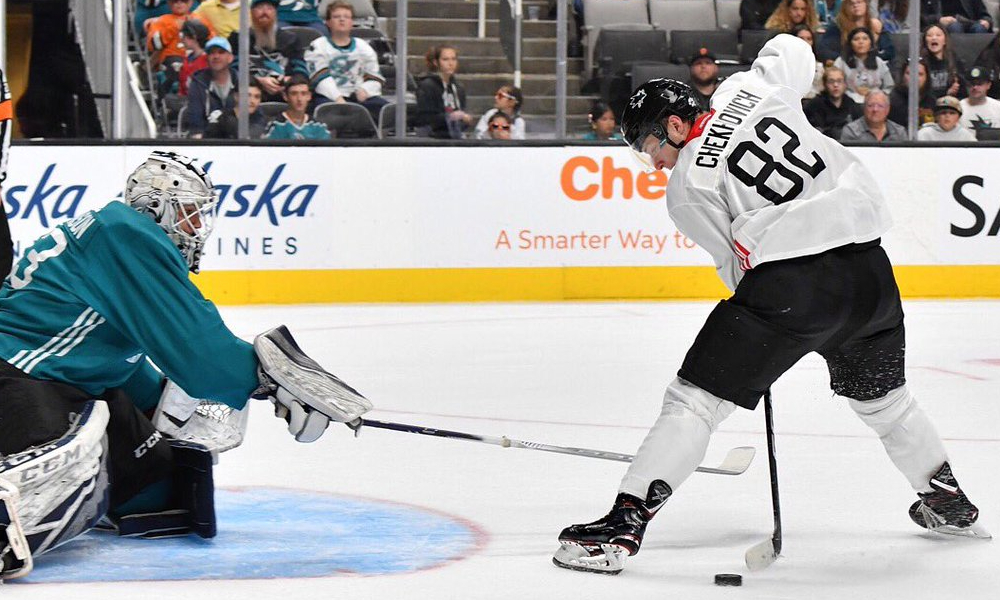 Projecting and ranking prospects is a fun endeavor for any hockey fan. Good prospects can provide hope to a fanbase when their team is struggling. In recent years, this exercise would have given any Sharks fan an uneasy feeling but after a draft where the Sharks made several high upside picks, the future is looking a bit brighter. Have the Sharks found their next star player? Or maybe they’ve found a few of those valuable depth players needed to compete for a Stanley Cup? This list will dive into the past, present and future for the franchises top 15 prospects.

Prospect rankings will often draw mixed reactions. Some will say “how can you rank a guy who hasn’t even played in college yet ahead of a guy who has played a game in the NHL”. The answer to that question for me is quite simple, I value high upside prospects over a guy who will simply make the NHL (not to say those players aren’t valuable to the team). On the flip side I also like to consider how realistic it is for a player to reach that ultimate upside.

This list will be released in 3 parts over the upcoming days. Players who could be considered “NHLers” have been excluded, whether they’ve played a whole season or just a dozen games. Think Middleton, True, Gambrell, and Gregor.

Today’s group features a couple of players who are relatively close to getting some minutes in the NHL as well as a couple of recent draft picks with exciting upside.

We start off with Yegor Spiridonov, a big bodied center who has a strong two-way game. He is reliable on the penalty kill and has contributed offensively at the junior level in Russia. Last season he scored 9 goals and 22 points in 26 games for Magnitogorsk of the MHL. So far Yegor has had a solid start to the 2020-21 season earning a couple of games in the KHL, Russia’s (and Europe’s) top league. It will be interesting to see if Spiridonov is chosen for the team representing Russia at the upcoming World Junior Championships. He was recently named to the camp roster and securing a spot would be a golden opportunity to see him play against the worlds best under 20. It’s difficult to determine what Yegor’s ceiling is but he is trending in the right direction in getting KHL minutes at 19 years old. He doesn’t really possess any elite abilities and isn’t going to blow you away with his highlights but he’s a hard working player who has a high hockey IQ. If Yegor makes the trip to North America, continues to work hard and adjusts well he could have an upside of 3rd line forward, while getting PK minutes.

Brandon Coe was a mid-round pick who some projected to go much higher in the recent draft. The Sharks traded a 2021 3rd round pick to have the opportunity to take him which is typically a sign they really wanted a specific player. Brandon has an intriguing skillset as he’s speedy for his size (6-foot-4, 190 lbs), plays physical hockey and can use his stickhandling to beat defenders 1-on-1. Mix that recipe together and you think this is a player taken in the first round. Not so fast, despite the impressive skillset Brandon didn’t really dominate the OHL during his draft eligible season (25 goals, 57 points in 60 games) and has been a bit inconsistent. To his defense, he did finished 2nd in scoring on what was the worst team in the OHL so those stats likely would have been more impressive with a stronger team around him. Naturally Coe is a wildcard on this list and if he takes his game to the next level could easily jump to top 5 Sharks prospects next year. To take that next step Brandon needs to produce more during his draft+1 season, and carry the Battalion a bit. He has the skills to become a top 6 forward, but must develop consistency and learn to use his size as an advantage. As of now the OHL won’t be starting up again until February so it will be a while before we get the opportunity to see Brandon Coe play again.

It’s always great to get a young player with talent for free. The Sharks did exactly that earlier this year when signing Arizona State senior defenseman Brinson Paschinuk to an entry level deal following the completion of his collegiate career. At Arizona State, Brinson was a captain and highest scoring defenseman for the past 3 seasons. He has a powerful shot, makes strong passes and skates well. While he isn’t the largest defenseman size really isn’t an issue these days for making and contributing in the NHL. Brinson absolutely dominated his final 15 games this past season scoring 9 goals and 12 assists. Yes he was a senior but that level of production is always impressive in college especially from a d-man. The question with Brinson will be how his abilities translate from college to the pro game. I could easily see him competing to make the NHL roster as a bottom pairing d-man as early as the 2020-21 season, but it might be best if he starts off getting time with the Barracuda. If all goes well Brinson could develop into a top 4 defenseman who contributes offensively and gets PP minutes. Even with minimal development I think he has a very strong chance of at least being a serviceable NHL defenseman.

Brinson Pasichnuk scores the first NCAA Tournament goal in @SunDevilHockey history and with one shot has ASU right back in the game!

Has anyone in the Sharks system had a more disappointing 12 months that Ivan Chekhovich? Expectations were high coming into the 2019-20 season as Ivan was fresh off a 40 goal and 100 point season in the QMJHL and played well previously during 2 late season stints with the Barracuda. As an 18 year old he scored 3 goals and 9 points in 6 games and he followed it up as a 19 year old with another 7 points in 9 AHL games between regular season and playoffs. Unfortunately Ivan struggled to produce (4 goals, 12 points) and earn ice time in his first professional season on a weak Barracuda team. Ivan has strong skating ability, slick hands and a scorers touch, but his regression was concerning. When a player makes the jump from juniors you look to see how their game translates against bigger and faster competition. Ivan often looked out of place and lacking confidence much of the season. I still have hope for him rediscovering his game but this upcoming season will be important. The Sharks have loaned Ivan out to Nizhny of the KHL for the full season. He has started strong with Nizhny scoring 3 goals and 7 points during his first 10 games which could be a confidence boost. If Ivan gets his game back on track, he could develop into a 2nd line player at the NHL level, but without much of a defensive game he might not fit in a smaller role. Being stuck bouncing between the AHL/NHL could see him look to the KHL for a defined role, similar to former Sharks prospect Nikolay Goldobin.

It was difficult to pick a spot for Tristen Robins in this list. His skills are hard to ignore as he can easily beat guys 1-on-1, has a good shot and plays a strong two-way game. Some have questioned his skating abilities but from what I have seen I disagree. At times his skating may look a bit choppy, but he accelerates with speed and can use it to get around defenders. The real questions with Robins are what’s his ceiling and was his heroic 2nd half of the season a fluke. The London born (England, not Ontario) forward wasn’t on many teams radar’s early on during the 2019-20 campaign. Prior to December Tristen had only 9 goals and 19 points in 29 games, which is not going to draw attention for a draft eligible forward. From December on that changed with Tristen often looking like he should be a first round pick registering 24 goals and 54 point in 33 games. Robins late season heroics helped Saskatoon clinch a wildcard playoff spot, but due to Covid-19 those playoffs never happened. In the end, Tristen won top defensive forward and team MVP awards for the Blades. Next year Robins could easily jump to the top 5 prospects. Long term, if Tristen continues to develop he could become a 2nd line scoring forward.

Come back tomorrow for Part 2 with prospects ranked 6 through 10!