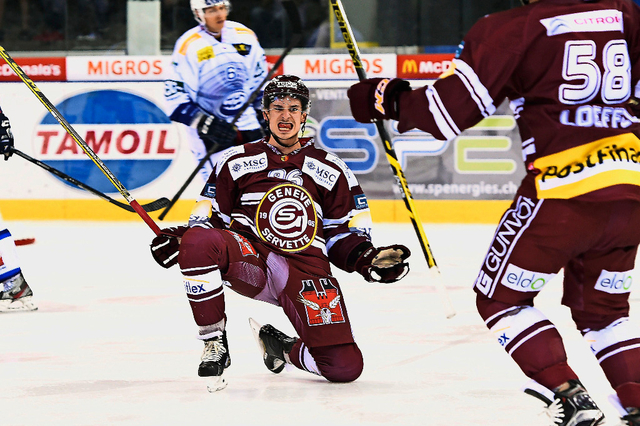 Rod’s Tumultuous Playoffs Are Over

Rod’s Tumultuous Playoffs Are Over

Fresh off his second suspension served of the National League A playoffs, San Jose Sharks prospect Noah Rod scored in his return, though it was not enough to extend the playoff run for Genève-Servette HC. In a semifinal upset, HC Lugano (5) advanced in six games over Rod’s GSHC (3).

The 19-year-old Swiss left wing, selected in the second-round (53rd overall) of the 2014 NHL Entry Draft, played much of the season on GSHC’s second-line and contributed as a key penalty killer. Unfortunately, Rod also gained a bit of a reputation in the NLA for his “over-the-edge” play. (Keep in mind: Many European hockey leagues hold completely different standards from North America when it comes to physical play.) At first glance, one would never know that Rod had been suspended twice in just nine days, considering he had just four total penalty minutes this postseason.

In the first period of Game 3 of their first-round best-of-seven series with HC Fribourg-Gottéron, Rod scored on a beautiful re-direction and added an assist. However, a blind-side hit to the head of Fribourg defenseman Andrea Glauser in period 2 would land Rod a one-game suspension. Though no penalty was given on the play and Glauser only sustained a bloody nose, the forearm shiver was quite deserving of the sit-down, as Rod did nothing to let up on the unsuspecting player.

After returning for the fifth and final game of the Fribourg series, Rod found himself in controversy once again in Game 1 of their semifinal with HC Lugano. Midway through that game, he was assessed a minor penalty for charging Lugano defenseman Stefan Ulmer. Rod traveled quite a distance to deliver a big hit on his opponent, though at no point did he accelerate into the Austrian. It looked like a typical NHL play where a defenseman dumps the puck out of his zone and the forechecker comes in to finish off his hit moments after. Ulmer was not injured and remained in the game. With having just come off of supplemental discipline, though, Rod was slapped with an additional four-game suspension for an alleged hit to the head. Despite television replays showing little evidence of head contact whatsoever and a subsequent appeal by GSHC, the suspension was upheld.

Rod could not even escape a critical eye upon his next return in Game 6, when his bad-angle backhander beat Lugano goaltender Elvis Merzļikins over the left shoulder. As the shot was taken, Merzļikins incidentally bumped the net off, causing a question of whether the puck had only gone into the net due to it teetering off the moorings. Replays were difficult to overturn the call of ‘goal’ on the ice, which stood (albeit far less dramatically than Wes McCauley’s call from Monday night’s Sharks game).

It was a peculiar playoff round, in general, for GSHC against Lugano. Three forwards of GSHC were suspended during the series (although somehow, Lugano coward Maxim Lapierre — yes, that Maxim Lapierre — amassed 52 PIM in six games without anything more) and the club was ultimately eliminated on, of all things, a penalty shot in overtime by Lugano defenseman Philippe Furrer.

Rod will be a Sharks prospect to closely watch throughout the 2016-17 season, although hopefully not for the wrong reasons. Now known as a “repeat offender,” it will be interesting to see if Rod will be able to maintain his enthusiasm on the forecheck in the NLA in a more inconspicuous manner.

In other NLA news, former Sharks right wing Devin Setoguchi and the defending NLA Champions, HC Davos (2), were ousted in five games by SC Bern (8). This marks the first time in the history of top-tier Swiss hockey that an eighth-seed advanced to the playoff finals.