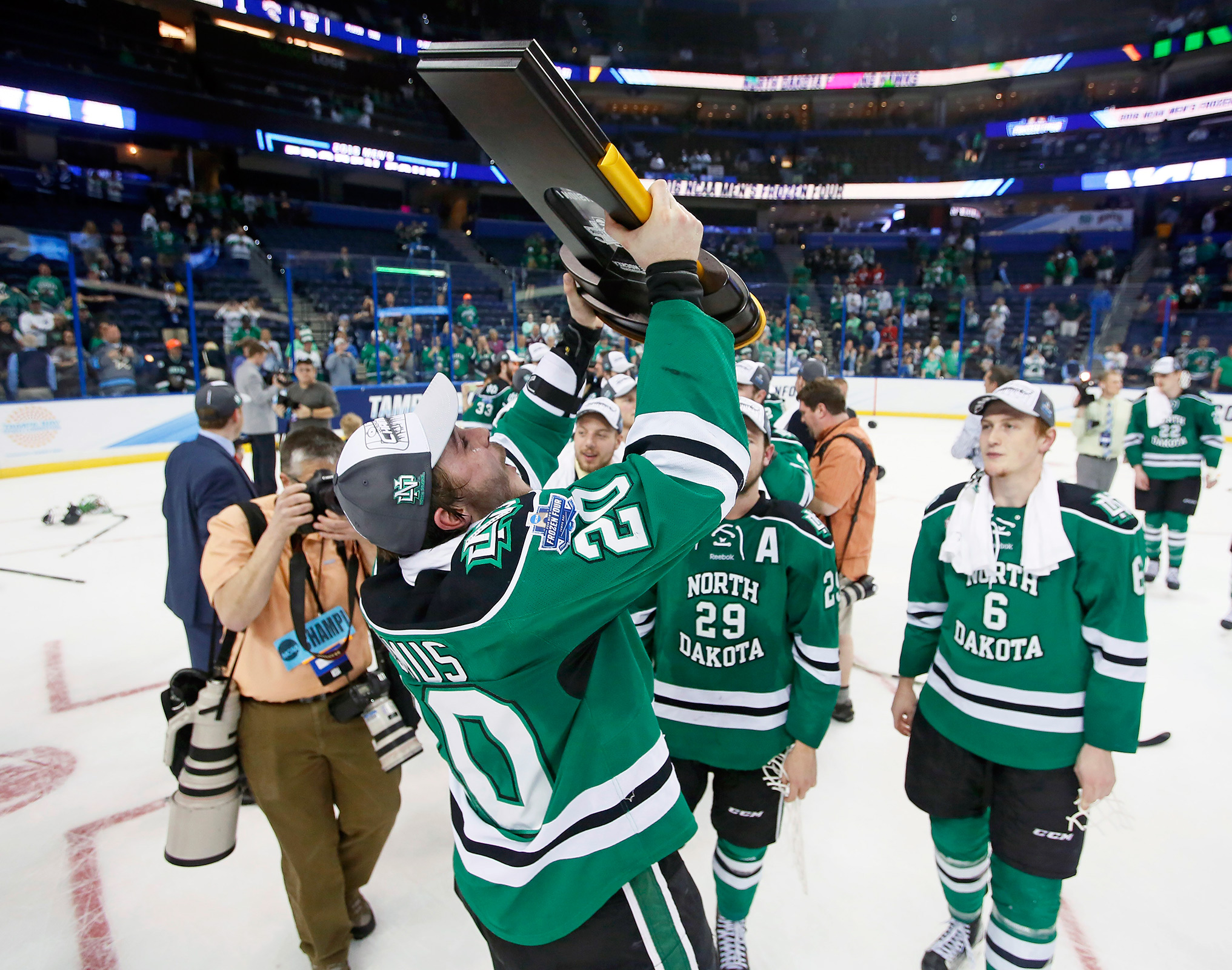 Amidst all of the questions surrounding the San Jose Sharks’ lack of defensive prospect depth over the years, defenseman Gage Ausmus is one current prospect who has steadily remained off-the-radar. He was not included in Ian Reid’s recent Pucknology series on the top 20 prospects in the organization, nor in a similar review on Hockey’s Future last month. In fact, Ausmus is likely not even the most notable prospect that the Sharks currently have from the University of North Dakota, with that honor going to San Jose Barracuda starting goaltender Aaron Dell. However, the one thing that Ausmus can boast over all other Sharks prospects is a pretty big deal – a national championship.

Saturday evening, Ausmus and the Fighting Hawks of UND (3) – formerly the Fighting Sioux – defeated Quinnipiac University (1) by the score of 5-1 to win the NCAA championship, the first for the university since 2000. Ausmus posted the primary assist on UND’s first goal, playing on their top defensive pairing. It was a monkey off the back for the Hawks, after having lost in the semifinals of the Frozen Four in six different years since their last championship appearance in 2005.

A fifth-round selection by the Sharks in 2013, the Hawks junior has been largely overshadowed by an incredible corps of defensemen that includes Paul LaDue (Los Angeles, 2012 6th round pick), Keaton Thompson (Anaheim, 2013 3rd), Christian Wolanin (Ottawa, 2015 4th), and Tucker Poolman (Winnipeg, 2013 5th). His defensive partner, Troy Stecher, is one of the most-coveted free agents in all of hockey (though technically has one more year of NCAA eligibility remaining).

Based on the times that I have watched Ausmus play, this is one instance where the Hockey’s Future scouting report is dead-on-the-money. Ausmus is a very simple defenseman with solid hockey fundamentals. His awareness in his own end allows him to be positioned to block shots with aplomb with his 6-foot-2, 220-pound frame. It also means that by relying on his positioning, Ausmus is less-inclined to be overly-physical, although he does not seem to have a problem playing with grit along the boards and in corners.

Although Ausmus has shown the ability to make a reliable first pass to break out of the defensive zone, his play in the offensive end has been unnoticeable in his three years at UND. While he had more offensive output this season (11 assists) than his freshman and sophomore years combined, Ausmus did not score a single goal in 42 overall games. While he appears to have the appropriate acumen in the defensive zone to handle himself in the professional ranks, his ability to play a more-rounded game is still largely unproven.

Ausmus is the first San Jose-drafted prospect to win the NCAA championship since Isaac MacLeod of Boston College in 2012. MacLeod was never signed by the Sharks and retired after just one professional season in the ECHL. In fact, Ausmus’ college statistics have been quite similar to that of MacLeod, and it is still far from certain that the Sharks will offer the Hawks captain a pro contract before the August 2017 deadline.

It may serve Ausmus best to forego his senior year at UND if the Sharks do make the offer. The Kings have been frothing at the mouth to get LaDue under contract. Stecher appears to be eyeing the Vancouver Canucks as his target to sign with. Thompson could continue the trend of departing juniors and land a deal with the Ducks. If Ausmus remains with UND, he would have one last year to grow out of the shadow of his teammates. However, he could just as easily be in for a rough senior year on a potentially-depleted UND blue line. If that were to happen, Ausmus may wind up searching for a team to try out with and nothing guaranteed.

Regardless of what happens with Ausmus in the future, one thing that we do know is that he is “Sioux Forever.” Better yet, “Champion Forever,” certainly has a nice ring to it. That is one title that Gage Ausmus has all to himself in the Sharks prospect pool.