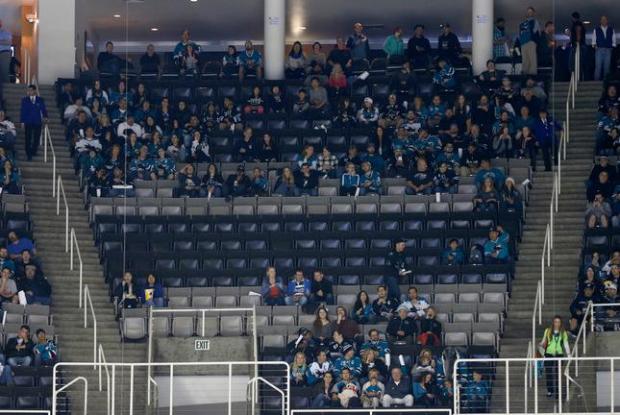 Hockey fans watch the San Jose Sharks versus the Nashville Predators from the upper deck of the east side, above the goal, about halfway through the first period at the SAP Center in San Jose, Calif., on Wednesday, Oct. 28, 2015. The announced crowd was 15,219. (Nhat V. Meyer/Bay Area News Group)

As it stands right now, the San Jose Sharks are on pace to have their first sub-.500 home record since the 1997-98 season. In turn, it has been highlighted that the SAP Center has struggled to sell out the majority of their games for the second consecutive season. Some say that fans do not want to go watch a team that does not play well at home. Others argue that the team has struggled at home because they no longer have a full and boisterous crowd to give them an advantage. Regardless of whatever reason someone has for not attending a live game, the way the Sharks organization is handling the circumstance is what fans should really be questioning.

At the Sharks 25th Anniversary gala in January, team majority owner Hasso Plattner professed that he was “really concerned about the situation” of declining attendance. Ever since, the organization has undergone a significant restructure of their sales department. (I, myself, have had my SharkPak account manager changed twice this season.) The new “Sharks 365” marketing initiative has promised to bring more dedication and benefits to season ticket holders.*

Wait. Why the asterisk, you ask? This new business philosophy has gone from being something that is supposed to be rewarding for full-season ticket holders and turned into something belittling against half-season and SharkPak (quarter-season) ticket holders.

Earlier this week, half-season ticket holders received their Stanley Cup playoff ticket plan options with a payment deadline of March 29. That does not sound out of the ordinary until you find the new catch. As discussed on Tuesday night’s edition of Pucknology After Dark, playoff packages must now be paid in full for all rounds by this deadline, regardless of how far the Sharks advance.

In past years, partial-season ticket holders were given a “Pay As You Go” option, allowing for payments to be made only when games were guaranteed to be played. That option is now exclusive to full-season ticket holders only, as my account manager confirmed Thursday evening. SharkPak holders must also pay up front for the entirety of the playoffs.

Furthermore, it would appear that excess funds from playoff games or rounds that are not played will be automatically committed towards next season without refund. Previously, anyone who paid-in-full for playoff tickets had the option of using their existing account funds towards the following season or could be reimbursed without penalty. My account manager believes that this has also been done away with, though could not confirm with full certainty. Of course, these sitting funds will not be garnering any interest while they sit in your Sharks account.

In other words, if ticket holders want to commit to playoffs for this season, they pretty much have to commit to next season or potentially lose their money.

(UPDATE: On March 23, 2016, it was announced that SharkPak holders will now be given an automatic refund for any playoff games or rounds purchased that are not played.)

It’s a ‘worst-case scenario’ for all non-season ticket holders going forward. There is no added incentive for fans to extend their existing memberships towards the playoffs, especially those who rely on a fixed income and cannot provide the funds to pay-in-full with just two weeks’ notice. (SharkPak holders will still not receive their playoff ticket plan options for another 7-10 days.)

The overall treatment of Sharks ticket holders, on the whole, also leaves much to be desired. Two weeks ago when I inquired about why I have not been receiving the many surveys that have been circulated this season to other members, the response was that, “Only Sharks 365 members are asked for feedback. Your opinion will be considered, though, if you become a part of Sharks 365.” Yes, folks. Even though I am an 11-year SharkPak holder, I was actually told that the organization does not covet my feedback unless I pay to upgrade my ticket plan.

It is not all peaches and cream on the full-member front either. A pair of 14-year full-season ticket holders, whom I know, decided not to renew their tickets when they were told, “You can be replaced,” by their ticket representative. Sure, even if there is a drop in purchased playoff packages, it is difficult to fathom that the Sharks would not be able to sell out their playoff games. Nonetheless, this kind of smug assumption exhibits everything that is wrong with the Sharks business attitude. Imagine if the Sharks aren’t able to sell out some of their playoff games. Remember how embarrassing it was that the Anaheim Ducks could not sellout their arena during the 2007 Stanley Cup Finals?

As the Sharks struggle with attendance, they should not be giving their fans reasons to not go to games, especially in the playoffs. I am yet to see the franchise that alienates its fans and sees its popularity increase. This organization should be doing everything in their power maintain the relationships they have had with their existing ticket holders. ALL of the existing ticket holders.

Sharks 365 is a program of addition by subtraction. Stripping the partial-season ticket holders of their few prime benefits is a poor way to sell the idea of paying even more money for a full season. That’s like saying that people can go to In-N-Out Burger and pay to eat, but only those who pay an exponentially higher amount can choose what they actually want to eat.

Can there really be a spike in full-season memberships at the literal expense of partial-season ticket holders? Aside from the nice $400+ food savings, it is all a lot of smoke and mirrors. Alternatively, what now is the incentive for holding one of those smaller ticket packages? Tenure? That should not be the main reason to maintain a SharkPak.

Plattner’s desire to improve attendance should be commended because he has at least identified a major issue ongoing with his organization. What the sales and marketing departments have put together is not the answer though. Fans have had enough of the false pretenses and Sharks 365 is another in that line. The idea behind it is well-founded. The trend towards “all or nothing” for season ticket holders is the problem. Blatantly bleeding out the partial-season members could be far more counter-productive to anything that Sharks 365 hopes to resolve — filling empty seats. There is only so much abuse that fans can take before they reallocate their money towards other products that do not intentionally make them feel disparaged. Let’s hope that it doesn’t take 365 days for the Sharks to figure that out.