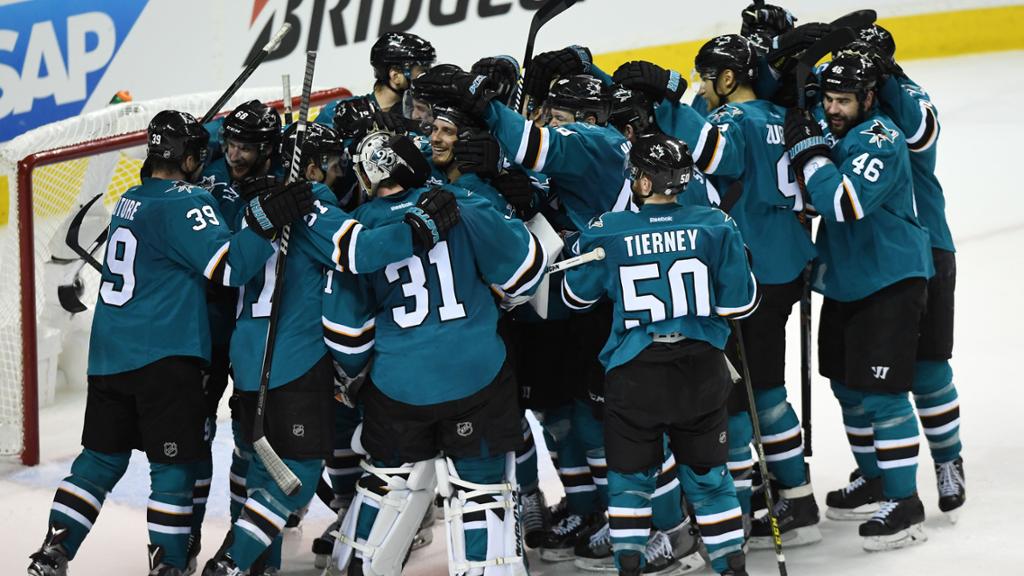 This first round of voting for the new San Jose Sharks goal song is complete and Van Halen‘s “Ain’t Talkin Bout Love” and the Isley Brothers‘ “Shout” were the top vote getters. I’ll pause here as you take a sigh of relief because the abhorrent LMFAO selection and Dub Dub are no longer in the running. While I’m surprised Motley Crue‘s “Kickstart My Heart” wasn’t among the leaders, the new selections the Sharks have for round 2 make it clear they like it old school.

While I loves me some Stones, I can’t imagine this working too well as a goal song. The production on it is very thin which would sound even thinner trying to get above the noise that 17,562 people are making because the Sharks just scored. It gets points for being a KUFX staple, but this doesn’t work as a goal song.

Get Ready For This – 2 Unlimited

Yes, yes, a thousand times, YES! As I pointed out in my round 1 article, this is the obvious choice. This is the first song the Sharks ever skated out to in their history. It’s the requisite tempo with the right energy and has an ample of “Hey” moments that the Sharks love. Hell, it’s so perfect, Puckguy wrote an entire article about it. Bring it back, Sharks. And how about the return of zamboni races and air Shark while you’re at it?

The Sharks already skate out to Metallica’s “Seek And Destroy” so going with another head banger from the SF metal band makes sense. “Enter Sandman”? Maybe. “For Whom The Bell Tolls”? Sure. However,”One” is just too staccato for fans to embrace.

This Is Sharks Territory – Whiskey Avengers

What in the H-E-double-hockey-sticks is this? I admire something Sharks related but this sounds like a bad surf song that was recorded in a Santa Cruz garage. This is almost as bad as the LMFAO choice from round 1. ALMOST.

I could get into this being the new goal song. It’s another KUFX staple that everyone knows. It also has a small, local history with team teal. Back in the 1990’s, a local bar band called Big Men On Campus would play at the Sharks pregame rallies outside the Tank, substituting “SAN. HO. ZAY” for “T.N.T” and fans got into it, replacing Bon Scott’s “OY!” with “SHARKS!”. This is a solid pick if 2 Unlimited isn’t selected.

While I like the song, I’m not sure I like it as a goal song. It does have a good tempo, a good amount of “Hey”, and is another from the usual KUFX playlist, but this doesn’t do anything for me. I don’t hate it, but I don’t love it. And similar to “Brown Sugar”, it sounds thin.

Round 3 begins this Saturday, March 19, I’m not sure why the Sharks gave 6 days to vote in the first round and only 3 days to vote in the second round, but so be it. We’ll find out which round 2 tracks go up against Van Halen and the Isley Brothers after the tilt versus the New York Rangers when the tracks are debuted during the Barracuda game on Saturday night.