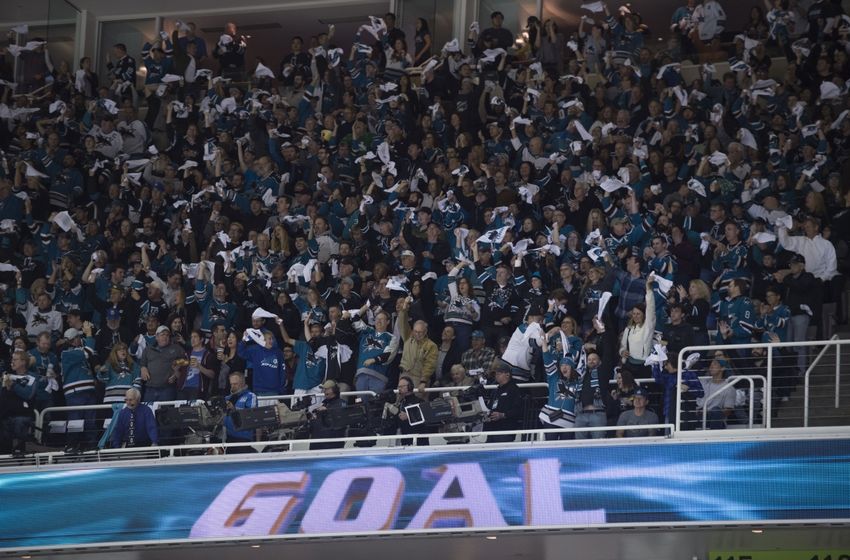 Stop me if you’ve heard this before. After starting the 2015-2016 season with a new goal song, landslide winner Sixx: A.M.‘s “Let’s Go“, the San Jose Sharks are once again asking fans to help them choose a new goal song. It’s understandable why “Let’s Go” didn’t resonate with the fanbase. I listed all the reasons previously, but the biggest reason it didn’t work is because it wasn’t Gary Glitter‘s Rock n Roll pt. 2.  Of course, if the Sharks fixed all the broken speakers and upgraded the sound system so people could actually hear the Sixx: A.M. track, perhaps it would have had a longer shelf life. The one benefit these new selections should have is that they won’t be compared to Rock n Roll pt. 2.

Without further ado, here are the new options the Sharks are eyeballing:

Considering that the Sharks flagship radio station is a classic rocker, a well known, classic rock song does make sense. I’m not aware of any other team using this as a celebration so that’s a plus. However, this option goes to show the Sharks really want people to say “hey” when the Sharks score. While I am a Van Halen fan, the snippet the Sharks are using here sounds forced and bland.

This song makes the Chicago Blackhawks song “Chelsea Dagger” seem palatable. This song isn’t a classic. It’s just another track in a long line of bland EDM songs that will soon be forgotten. Considering how many complaints I hear from fans with regards to the selection of EDM music playing during warm-ups, I can’t see how this wins out unless the fans are looking to annoy the other team to death. However, it gets a point for no one else using it. And once you hear it, you understand why.

Jump Around by House of Pain

This gets a point for being a classic, well known hip hop track. However, as I previously stated, the Sharks’ flagship is a rock station and Jump Around wouldn’t feel right. Not to mention, Nebraska owns this song so this should not even be in the running.

Kickstart My Heart by Motley Crue

Now, we’re talking. While this song is used in just about every arena in sports, I’m unaware of any team that uses it as their celebratory option when they score. This is also a staple on 98.5 KFOX so it does make good sense. Oh, the irony of going with a song from Nikki Sixx’s previous band rather than his current group. Maybe the Sharks should have went with this option when I originally submitted it. Out of the options given, this is the obvious choice.

No, no, no… a thousand times, NO! Having a song that replaces “Shots!” with “Sharks!” is a nice idea, in theory, but this track is so cheesy, the Sharks would have to hand out glasses of wine every time they played it. If this song were to win, opposing fans would swarm the tank and wouldn’t even mind seeing their team lose just so they could watch the face of every Sharks fan when this song plays.

As a fan of Animal House, I like this song. In fact, I even submitted it as an option at one point. While the song isn’t used by anyone else, it’s also twice as old as the Sharks franchise which can’t possibly be the target demographic the Sharks are looking to cater too.

Are You Ready For This?

If the Sharks are looking for a classic song that has broad appeal, why not look no further than the track that the Sharks used to skate out to? 2 Unlimited’s “Get Ready For This” satisfies a lot of requirements the Sharks should have on their list

My edit below would be the perfect choice, in my humble opinion. Then again, I submitted the current goal song so what the hell do I know? Either way, I think 2 Unlimited makes the most sense, at least to finish out this 25th Anniversary season. The Sharks have already brought back an organist. Why not bring back this classic too?

Overpayment by the Sharks or bar set high?
Round 2 For The New San Jose Sharks Goal Song