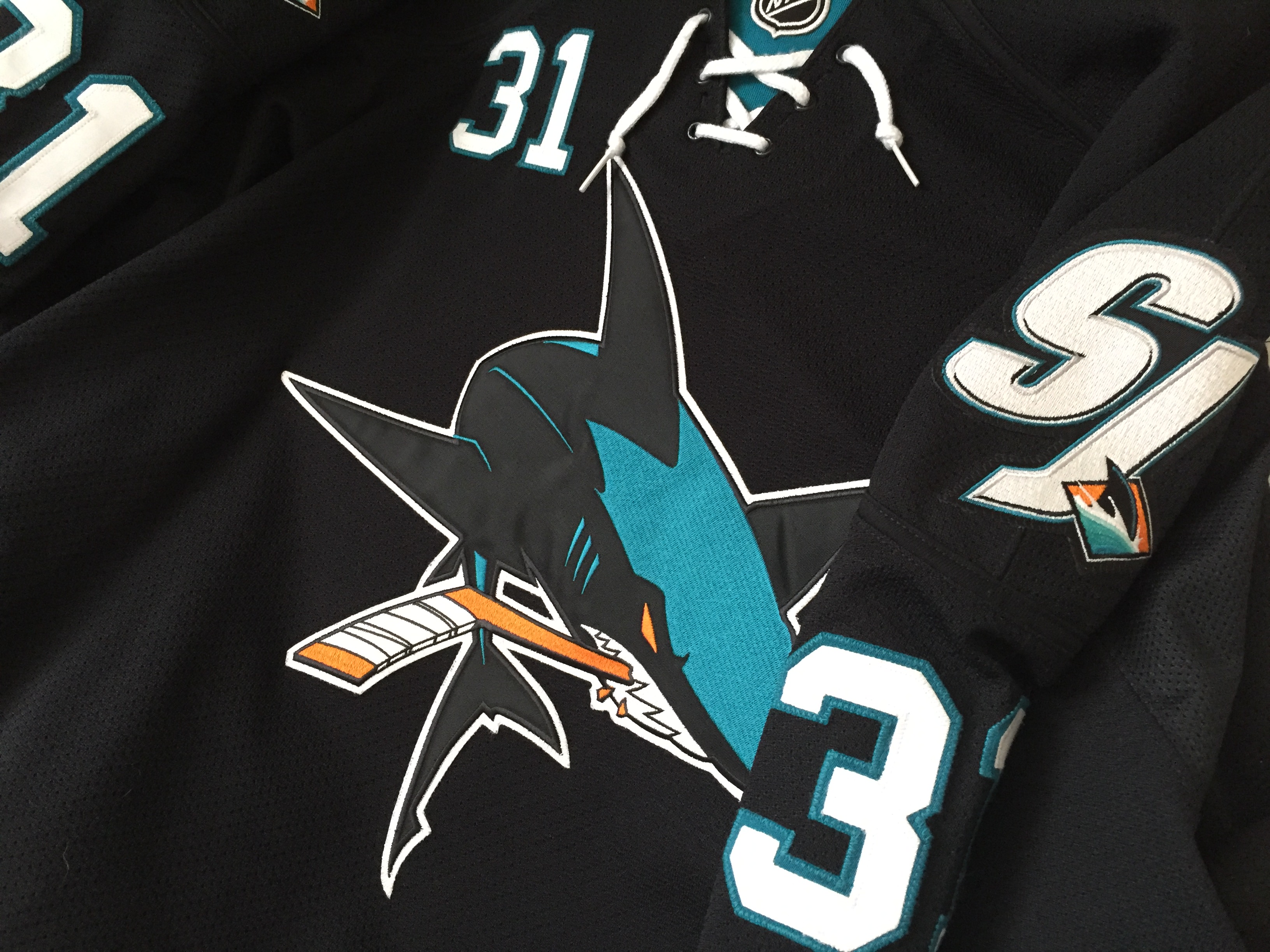 Team Teal, as they are affectionately known, have played on the dark side prior to this. From 2001-2007, a black sweater with chevron stripes of teal and white, with a thin black stripe in the middle, was worn with the original Sharks crest. This was worn mostly every Thursday home game.

When the National Hockey League adopted the Reebok Edge uniform system, third jerseys were not in use in the 2007-08 season. A black third jersey was in the works for the following year.

November 21, 2008 was the day the Sharks unveiled the “BlackArmor” RBK third jersey. The idea was a clean, simple, retro look with a thick teal stripe encased with thin white stripes. The lace up collar was a new touch along with the full body Sharks logo. It would be the first time the Sharks would not wear the primary logo with a Shark biting a stick in a triangle. It was met with resounding excitement and criticism. On one hand, those who despised the addition of orange into the home and away jerseys, loved it. On the other hand, many had issue with a “practice jersey with hockey tape on the arms” or it was “too plain” for their liking.

The following night the Sharks made sure to get “BlackArmor”off to a good start, with a 7-2 drubbing of Alex Ovechkin and the Washington Capitals.

In 2011, with players citing the light weight of it (with the lack sewn in striping on the main part of the jersey), the Sharks decided to go with the black jerseys.  It went very well with a 6-4 home record, defeating the Los Angeles Kings in their first ever matchup against their Southern California rivals. They would win a classic seven game series against Detroit, where the Wings came back from an 0-3 deficit, but the Sharks would win Game 7 and advance to the Western Conference Final for the second consecutive year.

After that, it was all ups and downs. 2012 saw the Sharks not win a home game in a five game loss to St. Louis.  In 2013, San Jose would go 5-0 on home ice, including their first ever sweep in a playoff series, but eventually lose a seven game Western Semifinal series to the Kings, where home ice reigned supreme.

In 2014, after the uniform change to “The Next Wave” where the team unveiled teal and white jerseys that were as light, if not lighter than “BlackArmor”, they went black again… Warning: Graphic images to Sharks fans.

The jersey was considered cursed.  So much so that in the Summer of 2014, the team announced it would go back to it’s traditional Deep Pacific Teal home jerseys.  Of course, the Sharks would miss the postseason in 2015, but 2016 was special as they were two wins shy of hoisting the Stanley Cup.

As heard early in the season on The Pucknologists, Sharks COO John Tortora stated the third jerseys would not return for the 2017-18 season, likely to return in 2018-19.

In a more recent updated interview Tortora in January, it appears there will be a third jersey in 2018-19 and be more heritage based but not a duplication of the 25th anniversary heritage jersey.  Perhaps the “Screaming Shark” secondary logo that was unveiled this season on a teal original style?  Or do they go a black jersey ala my Barracuda fan inspired jersey with Sharks logos on it?

It remains to be seen, but farewell to one of the more lightest, sleek, and cursed jerseys in San Jose Sharks history.