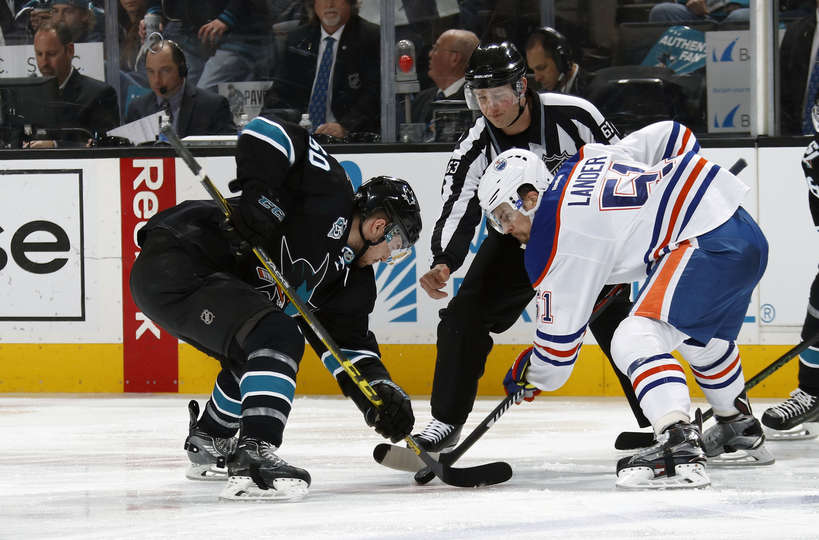 With the Anaheim Ducks winning the Pacific Division title yet again, the San Jose Sharks are locked up in a first round match-up against the Edmonton Oilers, who make the playoffs for the first time since the 2005-06 season. Although the Sharks had a shaky finish to the regular season, albeit winning the last home game, they can still turn their misfortunes around in the playoffs. Here are my keys to the Sharks’ success in this first round series of the Stanley Cup Playoffs:

If there’s one thing I’m afraid of facing Edmonton, it’s their speed. More specifically it’s the speed of young phenom Connor McDavid. I know some Shark fans out there are already tired of hearing his name and people gushing over him, but I’m sorry. This guy’s the real freaking deal here. The league honestly hasn’t seen a player of his caliber since Sidney Crosby entered the League as a Pittsburgh Penguin. This guy’s got the whole package. You want offense? He’ll definitely give you offense. You want speed? He’s got a ton of that. You want tremendous skill and hockey sense? He’s got that too. You want a player that plays a complete 200-foot game? He’s got the compete package.

If the Sharks want to have any chance at winning the series, Marc-Eduoard Vlasic needs to be back to his old self. He and Justin Braun need to be the shut down pair that they were last year or San Jose’s in trouble.

Part of defending against this Oilers team is to be physical. You gotta make it hit-for-hit. You have to battle it out against them and make them fight for every inch of ice. Play hard against them along the boards. Win those board battles. Make them tentative to even touch the puck. Make Edmonton have to look both ways before making a play. Frustrate the opposition and the likes of Milan Lucic and throw them off their game, but be disciplined as well. Maintain your focus and don’t be taking stupid penalties. That’ll for sure make them think twice about touching the puck.

Man, oh man. The number of times the Pucknology/Teal Town After Dark crew has beat the special teams drum this year. The Sharks have Joe Thornton, Joe Pavelski, Logan Couture, Patrick Marleau, and Brent Burns and they’ve still struggled on the power play. It’s inexplicable, and the second unit hasn’t looked any better either. They finished the regular with a mere 16.7 conversion rate with 41 power play goals, putting them at 25th overall on the man-advantage.

That has to be better. Their penalty killing has been okay; not too bad but nothing to write home about either. They finished at 18th overall with an 80.7% success rate. So, if their power play continues to struggle heading to the postseason, the Sharks need to rely on their PK units to be good. But, man. That power play has to be better than it was during the regular season. I don’t know what it is. I don’t know if they need to change their strategy or mix up their units. It has to start clicking in the playoffs because if it doesn’t, and I know that the deeper you go the more the refs will put away their whistles, but if it doesn’t they’re in trouble.

Play as a Team

You win as a team. You lose as a team. Right now, we don’t know whether or not either Thornton or Couture will be back for Game 1. *As far as it looks right now, Thornton may be closer to a return than Couture does at this point. While I’d rather have both of them back simultaneously, one hugely important centerman is better than none right now. However, if Thornton still can’t return for Game 1 of the first round, that means everyone needs to be all-in. Those aren’t easy roles to fill, but everyone needs to pull it together collectively and show up. No one takes a shift off. No one should be putting in a lazy effort. None of that crap.

You’re already down two of your top forwards, and while I agree with those who say that the Sharks weren’t all that great with Thornton and Couture to begin with this season, they’re all you’ve got at this point. The Sharks look listless without those two guys. The last game they played decent but that’s because more than half the AHL clubs for both the Sharks and Calgary Flames dressed to play in the NHL. So, they have to play to a man. They have to play as a five-man unit. That also means secondary scoring has to be there. The third and fourth lines have to step it up. They know who they are.

Martin Jones is obviously the number one guy in net and that’s not going to change any time soon. However, he needs to play better. I know that all five guys in front of him have to play better in front of him to a man, but goalies are always the last line of defense in case there’s a defensive breakdown. Jones has made some of the saves he’s had to make but I don’t feel like he’s made enough of them. He’s got to get back into his groove and be square to the puck. Don’t overplay it. Anticipate the plays. Anticipate the shooter so that he knows what’s coming, and part of that is communication. Jones and the defense have to communicate so that they’re all on the same page.

Cam Talbot has been great for Edmonton and is one of the main reasons for the great season they’ve had thus far. It’ll be a question of can Jonesy match up against Talbot.

Sharks, Please Prove Us Wrong in Our Predictions

The San Jose Sharks’ chances to repeat as Western Conference Champions weren’t great to begin with. Edmonton is a scary fast team when they’re faced with no adversity whatsoever. That’s why the Sharks have to make the Oilers have a reason to be concerned. That means all the hockey cliches: every player playing for the logo on their chests, short shifts, winning the battles, etc. There’s no other way. You want to get deep into the playoffs? You’ve got to grind it out and play for each other. Start converting on those wide-open nets. Start making your own breaks, because especially in the playoffs that’s the difference between winning and losing in this game. You want to win round 1? Every game and every shift matters from this point going forward.

*UPDATE: Per Paul Gackle of the Mercury News, Thornton is still considered day-to-day; he originally said there was “no doubt” he’d play Game 1.