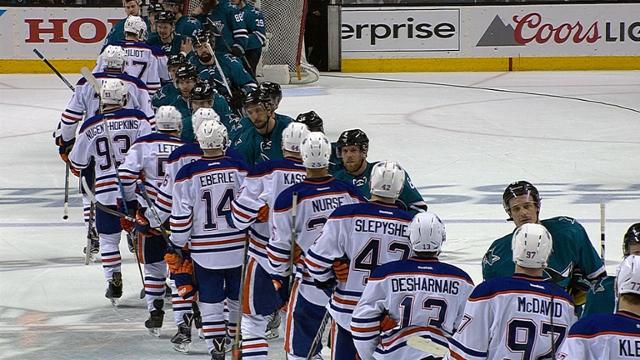 Welcome to my random thoughts series where I touch on a few different topics from around the league and the San Jose Sharks franchise, in general. Today we ponder what comes next for the now eliminated San Jose Sharks.

Sharks loss is the Barracuda’s gain

There is a silver lining to the Sharks first round loss to the Oilers. An already powerhouse Barracuda team is about to get more potent. Timo Meier has been reassigned to the San Jose Barracuda and, unless injured, Marcus Sorensen will join him. I understand some of the apathy towards the AHL in San Jose. It’s not the NHL and it’s not the Stanley Cup, but I can think of far worse ways to spend an afternoon with the family with tickets starting at $10 and $1 hot dogs and $2 beer for the adults. The Barracuda are not guaranteed to win anything, but having their best possible team on the ice will be fun.

I don’t think that Sharks fans should be disappointed that the Barracuda have a real chance to succeed. If anything, their potential for success should be looked at as a positive. This Barracuda team is mostly lead by Sharks prospects, many of which will likely be solid NHL players. It would be far more meaningless if it was made up of AHL mercenaries just filling lineup slots. It is like I always say, “When the Barracuda do good, it’s good.”

This is a very good team that plays a fun style of hockey.  Now is the time to jump on the bandwagon and if you haven’t, you have done yourself a disservice.

The Sharks will return to SAP one last time this season to clean out their lockers. The team management, coaching staff, and media will get their exit interviews with the players and we will find out who had what injury. This is a dangerous time for fans, where an injury will seem so severe that our first impulse will be all is forgiven. Peter DeBoer specifically said last night that Joe Thornton was playing through something that will shock most people. We know hockey players are tough and will play through stupid injuries and we love them for it. What we should also remember is what the Sharks looked like before Joe Thornton hurt his leg in Vancouver or Couture took a puck to the mouth.

The team was floundering before the injuries happened. They blew a nine-point division lead while healthy. While I don’t have a crystal ball, perhaps if the Sharks were healthy, they would have had a better showing against the Oilers. Frankly, we will never know. What we do know is the Sharks have some very big decisions to make in the off-season when it comes to Joe Thornton and Patrick Marleau. They have to choose between one more year and looking to the future.  It’s not an easy choice at all if you are Doug Wilson. It’s a choice that I hope isn’t made focused on injuries and not the last few months of Sharks play.

Pain if Thornton and/or Marleau stay

On After Dark last night, I said that I would pull off the band-aid and walk away from our aging veterans, which got a wide range of reactions as one would expect. How does one replace Joe Thornton? The short and simple answer is you can’t. There is nothing in the system and nothing in free agency that will replace Joe Thornton. I realize that I’m not helping my case here much at all. My question in response is, name a contending team that is counting on two 37 year-olds to be the catalyst for its offense. I can’t. Obviously, Burns is also a significant catalyst as well, but even on the power play, he relies on Joe Thornton to get him the puck.

I know fans want to see their favorite players retire here. They also want to win as well. I don’t think we can have it both ways, and worse, we might not be able to win either way. Keeping Marleau and/or Thornton would be consistent with the Detroit model, without winning the cups of course. Detroit held on to their veteran players far too long and are now paying the price, after being a one and done team for a few years. This is the path the Sharks are on, stubbornly stuck in the moment not looking to the future. Now I agree Thornton, following in Marleau’s footsteps, could take a lesser role on the team.  The problem there of course is when Peter DeBoer starts fighting for his job, it won’t last long. There will be pain.

Pain if Thornton and/or Marleau go

There will also be pain if Marleau and or Thornton go. Walking away speeds up the timeline of pain. It also gives the Sharks an opportunity to end their pain sooner as well.  Walking away from Thornton and Marleau will open cap space for extensions for Martin Jones and Marc-Édouard Vlasic, who should be kept and allow Doug Wilson to see what he really has in this team. We will find out if Couture is indeed a number one center and if Pavelski is a 30 goal scorer without Thornton as the end of his deal is coming up. These are the kinds of answers the Sharks front office should want answers to. They are also answers that they won’t get by standing pat, potentially until well after it is too late.

Tonight at 7 PM pacific time Teal Tinted Glasses will have post game thoughts from game 2 of the the Barracuda vs. Heat series.