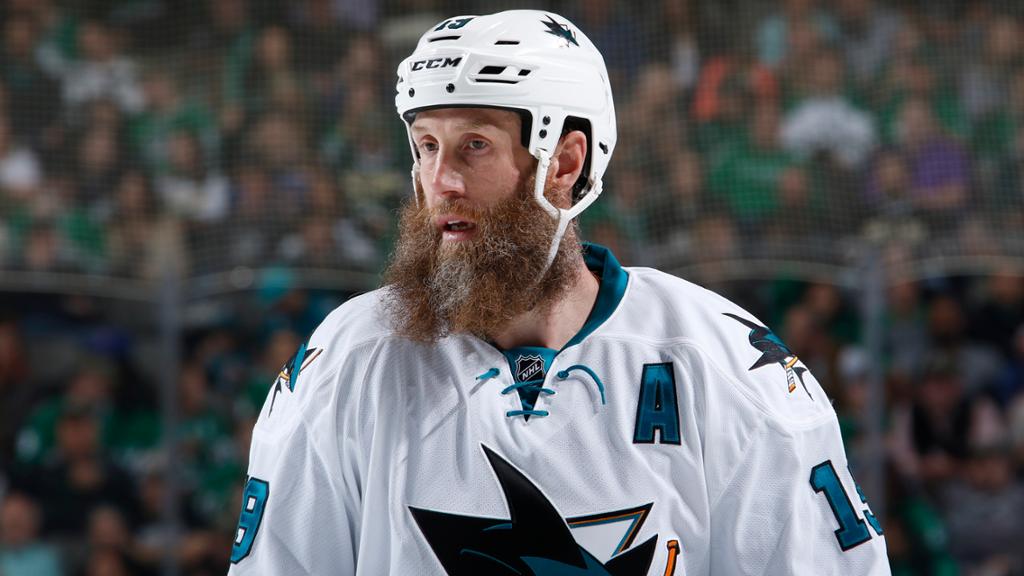 In this article, the San Jose Sharks free agents for the club get their turn under the magnifying glass. The Sharks already got a head start in re-signing Joonas Donskoi and Melker Karlsson and bringing in two players from Europe: center Filip Sandstrom and defender Radim Simek. But there are still some big fish needing contracts for the Sharks.

Elephants in the Room: Thornton and Marleau

The San Jose Sharks have featured the first two players taken in the 1997 NHL Entry draft for the past 11 years in Joe Thornton and Patrick Marleau. This summer could be the time that finally changes, and it could not be under more different circumstances.

Thornton had major knee surgery this summer, the first substantial injury he has had in San Jose where he averaged over 81 games played per season. The best playmaking center of his generation Thornton struggled to put up the points himself as the rest of the Sharks struggled to put the puck in the net and on the power play. It is highly likely, some might even say inevitable, that Thornton misses the early part of the 2017-18 as he continues to rehab from the injury. That said, it would be a shock if the framework of a handshake deal were not already in place. Even as the Sharks look to free agency and the trade market for reinforcements (or possibly a replacement) Thornton is still needed on this team.

On the other hand, Marleau could move on to greener pastures. He is still one of the faster players in the NHL and his 27 goals last season, including the 500th of his career, placed him third on the Sharks behind only the 29 tallies each of Brent Burns and Joe Pavelski. Marleau has always been the reluctant star, and the Sharks might be equally as reluctant to give him the term Marleau desires. The Sharks all-time leader in nearly every offensive category said he feels he could play another five years. It’s doubtful any team would sign him to that long of a contract, but staying on the west coast is possible as the Pacific Division clubs, and especially those in California, seemingly all need goal production.

Verdict: Sign Thornton for an agreeable term, two years, $11 million, and let Marleau walk unless he can take a similar deal.

Other Sharks Needing Deals
Micheal Haley and Chris Tierney are the only other notable San Jose regulars looking for contracts. Haley might be the most written about fourth liner in Sharks’ history but did his job and did it well for head coach Peter DeBoer. He was the lowest paid player on the roster last season (along with Aaron Dell) at just $625,000, so a useful role player for under 10 minutes a night at a bargain price is smart team planning. Like most bit players, Haley has been on a series of one or two year deals his entire career. But he’s taking away a roster spot that a young player could be growing into over a little-used veteran.

Tierney is a tougher situation. He is a restricted free agent and just 22 years of age already has parts of three years of experience in teal. The offensive production in his rookie season (21 points in 43 games) continues to be the high-water mark for him. DeBoer said during the final media availability of the 2016-17 season that he does not consider Tierney to be a young player anymore and a step forward needs to be made. The Sharks need Tierney to assume a bigger part of the offensive load, and a show-me contract is in order.

Verdict: Sign Tierney to a two-year, $3.5 million show-me deal and see what the Sharks have in him. Allow Haley to walk and let the next generation fight for his roster spot in camp.

Down on the Farm: UFA’s
The San Jose Barracuda’s run to the Western Conference Finals, coupled with their stellar season, brought a lot of scouts and spotlight to the Sharks’ AHL roster. Like most years in the minor leagues, turnover is a given, and the Barracuda will look very different this coming fall.

In the Minors – UFA’s
Troy Grosenick, Buddy Robinson, Ryan Carpenter, Zack Stortini and Dan Kelly are all unrestricted free agents and the first three look ready to challenge for NHL jobs. The question is if they want to challenge for those jobs in Northern California where the roster appears nearly set up front and looked locked down in goal. Carpenter is the Barracuda’s version of Logan Couture: a two-way game with offensive flair and a knack for big playoff performances. The former Boston University Terrier, with every team losing a roster play to the expansion draft, could latch on elsewhere with a one-way contract. He’s ready and wherever Carpenter signs, it will be more for the opportunity to show what he can do full-time in the NHL.

Robinson and Grosenick are likely stuck in that “almost NHL but not quite” category but nearly no chance to crack the San Jose lineup. Robinson is a monster of a winger that skates well, has a good shot and can kill penalties. Expansion opens up opportunities for him both in a bottom-six role in the NHL or as the first call-up for teams without the prospect cupboard that San Jose has.

Goaltending jobs are fickle but Grosenick under a new two-year deal will likely backstop the Barracuda again next season although if Dell is unable to repeat his previous seasons play he could find his way to the NHL roster next season.

Kelly and Stortini are depth AHLers at this point, neither have the skating chops to return to NHL action. But they add toughness and veteran experience for the Barracuda, something head coach Roy Sommer likes to have around.

Verdict: Carpenter, Robinson could leave for better opportunities elsewhere where NHL jobs are more likely. Stortini and Kelly might be depth and grit options for the Barracuda.

In the Minors – RFA’s Unlikely to Return
There is a lot to get to here, so we will break it up and start with who departs. Mantas Armalis struggled in his first season in North America and with the Barracuda adding Clarke Saunders from the ECHL late in the season, his days appear numbered. Patrick McNally is 25, and with the emergence of Jacob Middleton and the signing of Nick DeSimone struggled to crack the lineup late in the season and the playoffs. Signing defender Radim Simek from the Czech Extraliga and Cavan Fitzgerald turning pro next season further complicates McNally’s place in the organization.

Verdict: Both likely do not receive contracts, but McNally has a sliver of a chance.

In the Minors – RFA’s with Arbitration Rights
Key players for the organization have arbitration rights this summer: Marcus Sorensen, Tim Heed, Barclay Goodrow and Joakim Ryan. Sorensen made it into the Sharks late season roster of Kevin Labanc, so he looks to have the inside track for an NHL job next season and his speed is certainly needed.

Sorensen’s signing likely dooms the chances of meaning playing time for Barclay Goodrow who has slid down the depth charts after playing 60 games in his rookie campaign in 2014-15. The following year he skated in just 14 contests and just three last season. The Sharks likely re-sign him, but he could be traded sweetener as well.

Tim Heed and Joakim Ryan were the best defender for the Barracuda by a nautical mile. If the Sharks lose a defenseman as expected in the Expansion Draft, both players are key: One will likely be the seventh defender, and the other will anchor the Barracuda and by the first call-up should injury strike. Heed also loses his waiver exemption next season and he would likely be claimed should the Sharks try to send him down.

In the Minors – Remaining RFA’s
Two more Barracuda need contracts at opposite ends of the prospect spectrum. Nikita Jevpalovs made great strides in this second professional season since signing with the Sharks as an undrafted free agent from the QMJHL. He had a few head injuries that are cause for pause, but he’s a versatile player for the Barracuda that when healthy can help. His skating has improved, and his offensive output likely will never reach his 100 point season in juniors, but he’s a dependable forward.

The final player is Mirco Mueller, and the Sharks have decisions aplenty with the Swiss rearguard. Mueller does not have arbitration rights but now with three professional seasons is no longer waiver exempt, meaning the Sharks will risk losing Mueller when they send him down to the Barracuda to start the season or any time after they recall him. Mueller is perplexing and can but impress with his skating and puck skills and then leave you to wonder what he was thinking, often in the same period of play. His trade value is not much and might be only a sweetener in a deal, much like former San Jose Sharks first round pick Nikolay Goldobin was.

Closing Thoughts
The Barracuda will get a few other players next season as Manuel Wiederer signed with the club and Fitzgerald also move to the pro ranks. Unsigned prospect Rudolfs Balcers is a possibility if he signs and the oft-injured Jeremy Roy is AHL eligible next year but likely heads back for a final QMJHL season to try to put injury issues behind him.

In net, the Sharks organization is shockingly thin. Look for San Jose to be in the market for a minor league goaltender, preferably two of them.