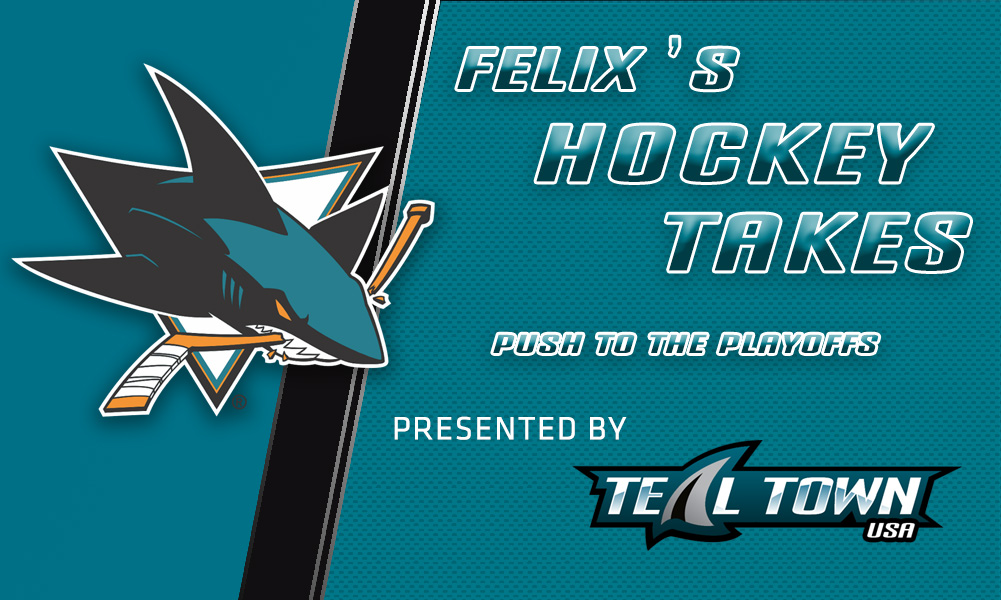 The San Jose Sharks earned a huge win Thursday night against the Vegas Golden Knights. I’ll give my thoughts on the win and what it means going forward into the postseason. I’ll also talk about Chicago Blackhawks and NBCSN color analyst Eddie Olczyk winning his fight against cancer.

A Blackjack Win in San Jose

Brace yourselves for the Vegas references and puns in this one, because the Sharks dealt the cards and won the bet Thursday night. Okay, that was kind of bad, but not as bad as a lot of people see the Vegas Twitter account nowadays! I digress. In all seriousness, this was a huge win as San Jose defeated the Golden Knights 2-1. We’re talking about a team that has had an unreal season supported by a really loyal fan base. That game last night showed why Vegas is where they are in the standings. They give 110% out there every shift. They make their opponents work for the puck. As it goes without saying, if you turn the puck over in your own zone against an elite team you’re in trouble. Well that’s what happened to the Sharks as Vegas forced a turnover. The defensive coverage got scattered a bit and Tomas Tatar made it 1-0. Of course, Martin Jones stood tall the rest of the way as well as Malcolm Subban who had himself a game, aside from the tying goal by Brent Burns and the eventual overtime game winner by Logan Couture (how ’bout that toe-drag, eh?).

Now if you weren’t watching the game, you missed out on a great one. You really did. Aside from that though, if you were to look up the stats right now — specifically the shots on goal — you would be thinking to yourself “how the hell did the Sharks not score four or five goals on the other team?”. I mean especially in the second period where the Sharks were outshooting the Knights 18-4, it still stayed a 1-1 tie at the end of the middle frame. A few things: yes, Malcolm Subban did play that well, but the Sharks also had some missed opportunities especially on the power play where they went 0/6. Fortunately for them though, Vegas was also an 0/2 on the man-advantage. All-in-all, the firepower on special teams was basically non-existent.

I want to touch on one other thing that I’m not sure anyone else is talking about. The Sharks won yet another game without Joe Thornton. Let me repeat. The Sharks won yet another game. Without. Joe. Thornton. Not to mention, again, against the first place Vegas Golden Knights. Holy crap. This is a huge, huge confidence booster for team teal. They are now on a six-game winning streak heading into Saturday’s matinee tilt against the Calgary Flames. They’re essentially a lock to make the postseason. Life is looking good for the Sharks. Of course, they can’t be complacent because we all know what happens when they do sit back and get lackadaisical. But man, if this team gets their players back, from Joel Ward to Joonas Donskoi, and soon Jumbo Joe (assuming he somehow fully recovers from his knee injury in two weeks)… this team might have a chance to go to at least the Western Conference Semis. I mean, look, who knows? We’re used to the first, second, and third round exits. The Sharks have gone to the Stanley Cup Final once. Who’s to say it can’t or won’t happen again? No matter how much I analyze, what matters in the end is the result in the postseason. We’ll just have to see what happens.

Last night during one of the intermissions, NBCSN showed a clip of Edzo making the announcement that he’d been declared cancer-free by his doctors. He had been battling colon cancer. Way to go, Eddie! Obviously cancer is a deadly disease that affects everyone. Unfortunately it claimed the life of Dave Strader just before the start of the 2017-18 season. Recently, NBCSN’s Inside The Glass analyst Pierre McGuire underwent treatment for prostate cancer. It’s unclear what the progress is on that. If anyone knows, I would appreciate an update on that. Fortunately, Eddie Olczyk is alive and well, and I’m looking forward to hearing his voice during the Stanley Cup Playoffs as I try to catch what I can while burying myself in job search prep and interviews.