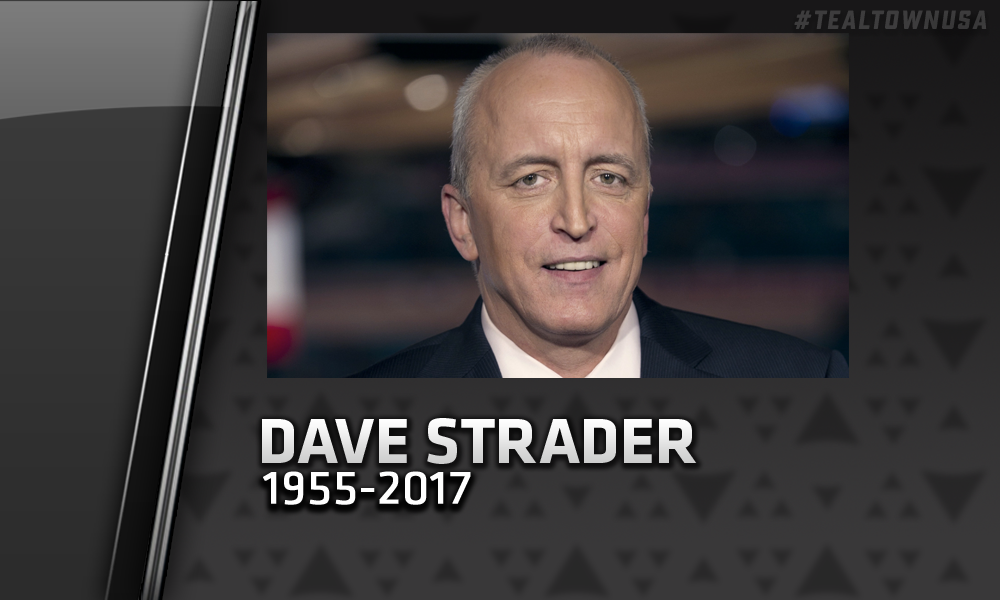 Longtime hockey broadcaster Dave Strader, passed away on Sunday after a battle with bile duct cancer.  He was 62 years old.

Strader began his hockey play by play career back in 1978 with the Adirondack Red Wings, Detroit’s AHL affiliate.  After a few years in the minors, he got “the call up” to be alongside Mickey Redmond for Detroit Red Wings games on television.

“He was one of the most iconic play-by-play announcers of his time and a true gentleman.“ – Ken Holland

In the 1990’s Strader was getting national attention.  He was hired by Fox to call their brand new NHL national television package.  He would later move onto ESPN in 1996 full time as the play by play man on many telecasts and would develop great chemistry with color analyst Darren Pang.  Strader would also call many Stanley Cup Final series for NHL International.

After the cancelled season, Strader went back to local broadcasting with the Panthers, Coyotes (where he would reunite with Pang), and the Stars, while help out on NBC and NBCSN (prior to that, OLN and Versus) for the Stanley Cup Playoffs and filling in for an ill Mike Emrick at the 2009 NHL Winter Classic.

Dave would jump into the booth with the Dallas Stars for the 2015-16 season, during that time he was diagnosed with the rare, bile duct cancer.  After a number of treatments, 283 days after his initial diagnosis, he would return to the booth and called a memorable game between Dallas and Tampa Bay, in which after Jamie Benn won the game in overtime, the team saluted Strader.

Earlier this year, it was announced that Strader was to receive the Foster Hewitt Award at the Hockey Hall of Fame Induction Ceremony this coming November.

Darren Pang offered his thoughts on Twitter on Sunday:

We have all been so fortunate to have known, or watched, listened to @TheVoiceDS during his illustrious career. He had touched us all.

With his positive thoughts, witty humour, care and respect for the game. He was a one of a kind PxP broadcaster. He was even a better person

This is a sad day for all of us. We know that he is in a friendly place. Calling the game from a higher broadcast booth. RIP Strades. Xox

I saw @TheVoiceDS and his family on Wednesday in Glens Falls. He reminded me that this was his last rd of golf. Check out the players! pic.twitter.com/5DyiUIfQz2

On behalf of the entire staff of TealTownUSA.com, we send thoughts, prayers, condolences to Strader’s family.

For Sharks fans, he called many memorable and forgettable moments in team history.
Classic Sharks vs. Kings from the third week coverage of the NHL on Fox

WARNING: The following will be discomforting to Sharks fans
Kevin Bieksa gets help from “The Stanchion”

Reverse Sweep is complete for the Kings