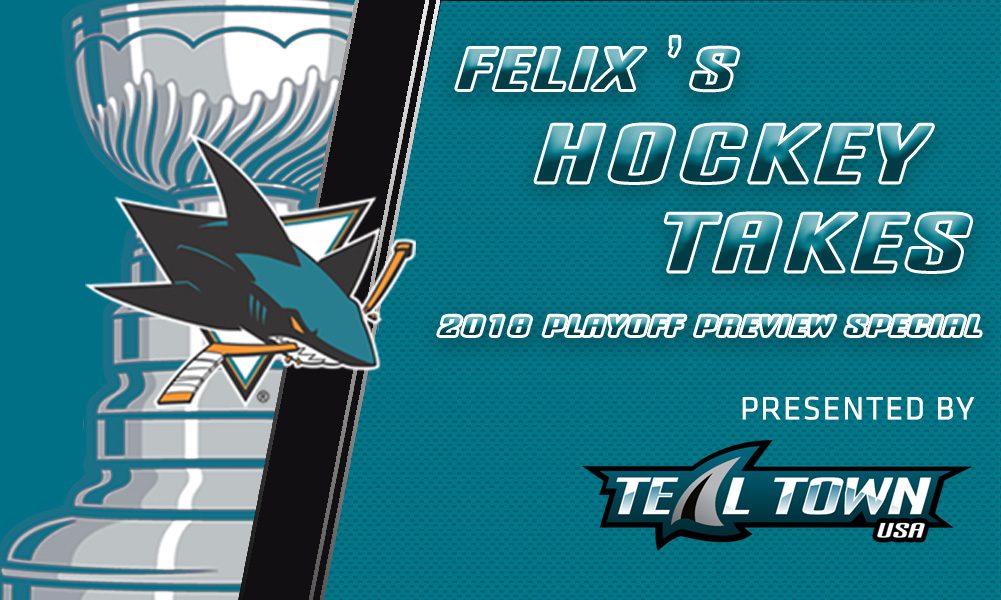 In This Playoff Preview Special Edition of Felix’s Hockey Takes

I’ll take a look at the remaining three games on the San Jose Sharks’ schedule and preview their chances in the first round, as well as other teams in the league. I’ll also briefly touch on the Sedin’s goodbye letter to their fans in Vancouver.

On the Verge of Clinching

The Sharks are coming off a less-than-average road trip, where their lone win came 4-3 in a shootout against the Chicago Blackhawks. Since then, they dropped a 3-2 decision in overtime against the Blues. They lost a high-energy, tight game against Nashville 5-3, and then they played one of their worst games all season in a 3-2 loss against the Vegas Golden Knights, which in turn clinched the Pacific Division title. The Sharks still have a chance to clinch tonight.

The @PredsNHL can clinch the Central Division and the @SanJoseSharks and @mnwild can join the playoff pool tonight. #StanleyCup pic.twitter.com/LNytqIW5tk

Of course, the boys in teal would preferably love to clinch without any help at all, but you know what? If they do clinch a spot tonight, I’ll take it. They have three games remaining on the regular season schedule, which will basically make up the last home stand of the year before the postseason. The Sharks will start off hosting Dallas, a team that’s already been eliminated from playoff contention. They’ll move onto Colorado which is currently in a playoff spot. They finish their regular season on Fan Appreciation Night/Thornton-Burns Barbershop Bobblehead Night/Sharks Tweet-Up Night against the Minnesota Wild.

Here’s a look at the standings as of now in the Pacific:

As of now, as mentioned the Vegas Golden Knights clinched the Pacific. San Jose is in second place with 98 points with a chance to clinch either tonight or tomorrow night against the Stars. Anaheim and LA continue to switch between 3rd place and first Wild Card spot in the West. Colorado, currently in the second Wild Card spot, continues to battle it out with the Blues, who continue to fight for playoff contention.

Before I start previewing the Sharks match-up, if the playoffs started today…

Sharks vs. Ducks, Round 1

The Sharks are heading into the playoffs a different team than in years past. For the first time since 1995 (before they drafted Patrick Marleau and acquired Joe Thornton), they will be playing without their top two players in the lineup. Marleau is, of course, with the Toronto Maple Leafs. Thornton is still out rehabbing his knee, although tweets from both Kevin Kurz and Curtis Pashelka seem to indicate that he is getting better.

We still don’t know what the timeline is on Jumbo’s injury, but so far this team has proven it can win without both guys. That’s going to be crucial going into the postseason no matter what team they’re facing. The good news is that the Sharks won the regular season series against the Anaheim Ducks 3 games to 1, the lone loss being in the shootout. This is a team that I’m quite confident they can handle. It’ll also be a breath of fresh air from having to play the Kings in the first round every year. The games between the Sharks and Ducks have, for the most part, been close except for the 6-2 rout at Honda Center earlier this year. Again, if the Sharks just play their game and don’t get sucked into the Ducks’ physicality and extracurriculars, they should honestly be fine. If they play with poor execution, lose all the important battles and take undisciplined penalties, that’s where it will become a problem.

Speaking of penalties, special teams will be huge. I know that power plays won’t matter much as teams go deeper into the playoffs since the refs won’t be calling as many penalties, but early on the Sharks want to make sure they can play great on the power play and kill penalties. Unfortunately, generally speaking when the Sharks’ play well even strength, they tend to falter in special teams. When they play well on special teams, their even strength play falters. It’s mind boggling if you ask me, but the Sharks have to find a way to fix it. I don’t care if they only get two calls their way, because those two power play goals could mean the difference between winning and losing a game.

Martin Jones has been alright this season. He’s had nothing to write home about, but at the same time he hasn’t been horrible either , at least not recently. Aaron Dell‘s been great when he’s had to be. As a result I feel like this team has good enough goaltending to get it done. I’d love to see Jones get back to the level he was when he helped the Sharks to a Cup run in 2016. That’s not to say the Sharks should just let Martin Jones carry the team on his back and the D call it a night, but … look, the goaltender’s always the last line of defense. Jones needs to be able to make the saves he should be able to make. I feel like he’s had that problem where he makes some great saves one night, and then he lets in more stinkers another. He’s got to have that consistency, and I hope he finds it in the playoffs.

All in all, my keys are:

The Vancouver Canucks Twitter account posted a link to Henrik Sedin‘s and Daniel Sedin’s letter announcing their retirements at the end of the season. Daniel was drafted 1st round 2nd overall in 1999. His brother, Henrik, was picked at 3rd overall in that same draft. Together in their illustrious careers, they played a total of 2,630 games, tallied 631 career goals, 1,475 assists, and 2,106 points. As much as they get picked on, you have to admire their career and what they’ve done in Vancouver. They have incredible skill and talent. I’ll always miss them for their seemingly telekinetic ability to read off each other to score goals. They’re incredible not just on the ice, but off ice as well. We at Teal Town USA wish them the best of luck post-retirement.