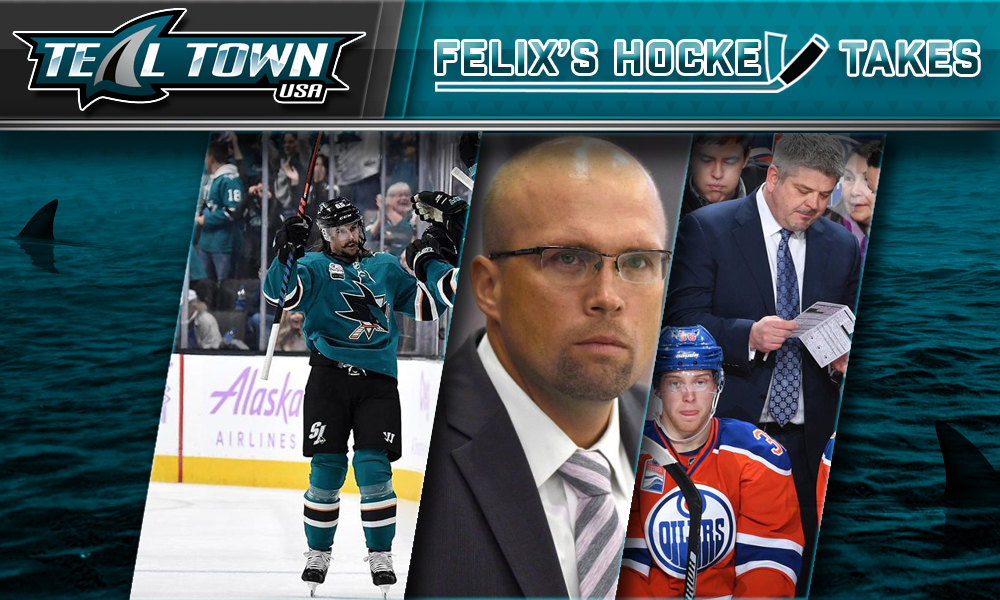 Writer’s note: This is a super delayed edition of FHT and I apologize. I just got through finals week for my current term, so I’ve been super busy, along with a little bit of procrastination.

I’m going to talk about how the San Jose Sharks have sort of progressed now a quarter way into the season, Erik Karlsson finally getting off the schnide, some more coaching changes that have happened around the league, as well as what in the heck the Edmonton Oilers are thinking, ’cause no one really knows.

So, first off before I even talk about ANY of the above items that I wanted to touch on, I wanted to acknowledge the NHL’s Hockey Fights Cancer initiative. Obviously, it’s a very important cause for everyone involved. There’s always someone out there who knows someone else who’s been affected by this horrible disease. I know there’s a few out there in Sharks Territory, especially a good friend of ours @MLSFAN20 who recently posted on social media about his dad’s recent cancer diagnosis, and the Teal Town community’s rootin’ for ya, bud! We’re all rooting for you and thinking about all those others who have been affected, my own family included.

That said, let’s get to the topics. The Sharks have had a decent last couple games on the home stand following a disaster of a mini two-game road trip against Dallas and St. Louis. So far, they’ve picked up 3 W’s at the Tank, starting against the Calgary Flames. Then it was a milestone night against Nashville with EK65 picking up a point on his 400th assist as he assisted on the Captain, Joe Pavelski‘s, power play tip-in goal, and then Joe Thornton‘s 400th NHL goal late in the third period that proved to be the game-winner in what was a very high scoring affair. They avenged their loss against St. Louis with a 4-0 win, as Erik Karlsson scored his first goal as a Shark, and it was “aboot” time as well. The Captain also had two goals, and Evander Kane scored his 7th of the season. However, with the loss against the Edmonton Oilers in overtime, they’re going to have to respond against the Vancouver Canucks. Will they win the last game of this home stand to make it a good home stand, or will it just be a meh home stand?

With that said, I feel like that’s been the story of this season so far, and especially this season. The Sharks have obviously battled adversity before. They’ve been through inconsistencies in the past but, so far with this talented of a roster, they should be better than they have shown at times. They’ve shown spurts of what they could be at times, and then they just flat out falter against teams they should be able to beat. I mean, this is a team that a lot of people had coming into the season as a Stanley Cup contender. I know I’ve said it over and over again, but Doug Wilson made that trade for Erik Karlsson so that they can go for one last serious push for a Stanley Cup before Jumbo Joe retires or moves on from the organization!

So, while I was on the “give it more time” train, it’s really starting to get to the point of the season where you really need to bank in those points. I mean we’re almost into December. I know it’s still early but this level of inconsistency is unacceptable for a team of this caliber.

The coaching carousel continues in the NHL as Mike Yeo was fired by the St. Louis Blues late Monday night after a 2-0 shutout loss at home against the Los Angeles Kings. It was the second consecutive time the Blues were shutout, after losing 4-0 to the Sharks. It also marked the third time in four games the team was held without a goal, including in the 1-0 loss against Chicago.

The Oilers have also fired their head coach, and former Sharks coach, Todd McLellan. In his place, they hired Ken Hitchcock, who was literally pulled out of coaching retirement. The change came just hours before Edmonton was slated to play the Sharks in San Jose. Prior to Tuesday night’s win at the Tank, the Oilers had lost 4 of their last 5 games.

Ken Hitchcock is a great coach. He’s obviously got a championship pedigree, coaching the Dallas Stars to a Stanley Cup in the 1999 postseason. Overall, however, this team is going to need more than just Hitchcock to get into the postseason. Even if they do get into the playoffs, they’re not going far.

A number of analysts and beat writers have pointed this out already, but for me, this is Peter Chiarelli’s last move as general manager of the Edmonton Oilers. He’s made so many questionable decisions, including the infamous Taylor Hall for Adam Larsson trade. If Chiarelli’s not canned midseason, he’s gone by the offseason. This organization needs to find a competent GM that knows what he’s doing, and not drive this team to the ground. I mean, you’ve got first overall pick Connor freakin’ McDavid on your roster, for crying out loud! You’re wasting the guy’s talent and prime years.

Honestly on that note, just when you think things have seemed to improve for this team considering what they’d gone through in previous years, management hasn’t learned! They’ve spent years wasting away their top picks, and then just traded them away. Not that I can see that ever happening with a generational talent in Connor McDavid but, you never know. This Oilers team just doesn’t make any sense to me at all, and until they find a good competent GM, they won’t ever make sense to anyone.