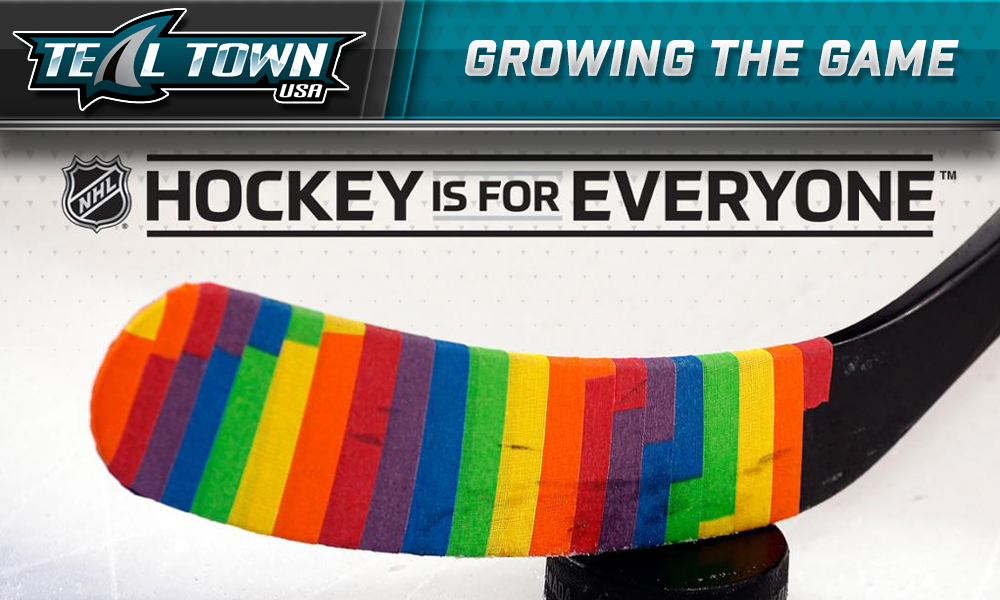 Growing The Game: Diversity and The Global Game

Growing The Game: Diversity and The Global Game

Today, we talk about diversity in hockey and where the sport stands in the International community..

Everyone knows hockey as Canada’s game. It’s the sport they dominate in. If you were born in Canada, chances are hockey’s in your blood. It’s in your DNA. You were born and raised to lace up the skates and play puck. Over the decades, of course, the game itself has evolved. However, it has also expanded to more places and impacted all walks of life. We’ll talk more about expansion and relocation in the next edition of Growing The Game.

Diversity has always been a touchy issue. Whether it’s in sports or in life, it’s always seemed like for whatever reason, society has always been against welcoming all kinds of people, from people of color to the LGBTQ community and heck, even women! However, recognizing the different communities out there is a huge step towards growing the sport even further.

You look at the various athletes that have come through this league and laced up the skates. A great example is recent Hockey Hall of Fame inductee, Willie O’ Ree. Born in 1935, O’Ree was the first black Canadian player to lace up the skates in the NHL. He wore no. 22 and played for the Boston Bruins. Though his numbers weren’t spectacular, he broke the color barriers in the league. Now we’re seeing more colored athletes in hockey in the form of P.K. Subban with the Nashville Predators, and Malcolm Subban as a member of the Vegas Golden Knights.

We can’t talk about diversity without mentioning the LGBTQ community. On April 2013, the NHL announced a partnership with the You Can Play Project. The NHL and NHL teams over the years have attempted to take strides to further their bond with the LGBTQ community, hosting special events like Pride Night, some athletes even attending their city’s Pride parades. On the outside, it’s a step in the right direction for a league trying to promote hockey throughout all community.

The NWHL (National Women’s Hockey League) and (Canadian Women’s Hockey League) CWHL has also partnered with You Can Play. Speaking of, the popularity of women’s hockey has been on the rise. According to SB Nation’s Ice Garden, there are now nearly 200,000 women playing hockey across the world. So, yeah. You could say women’s hockey is rapidly growing.

Hockey on the International Stage

In terms of hockey on the international stage, we know that the NHL has tried to promote the sport in China. They had the Global Series games there both earlier in this year’s preseason and last year’s. The Winter Olympics will be held in Beijing in 2022. However, it remains to be seen whether or not the NHL will actually participate. We also know that the NHL has held Global Series games in Europe. Four NHL teams played the Global Series this year. I still think the NHL should go to the Winter Olympics in 2022 because honestly, what better way to represent your country? Gary Bettman has brought up the World Cup of Hockey and that being a possibility again, but do we really want another World Cup of Hockey? Admittedly that game between Team North America and Team Sweden, which I touched on in the previous edition of Growing The Game, was awesome.

Now, I’ve seen suggestions say that the NHL should balance between the Olympics and the World Cup of Hockey and, honestly, I wouldn’t mind that either. The bottom line is the players want to go to the Olympics, and it would be a damn shame if the NHL was left out once again in 2022. We’ll see, though.

For this article, I slid into a few DMs on Twitter to gather feedback on where the fans think hockey stands in the international community as well as in terms of diversity.

Jade (@XLinkin_PunkX) commented about her thoughts on women’s hockey, making a great point on gear affordability as well as equal pay: “Well in women’s hockey, a lot of the players can’t afford their own gear. They have to play with torn up gloves and stuff like that so I think women need to be paid better. I’m not saying like NHL money but just better so they can afford living, food, their own gear, etc. and in many leagues we still need to normalize other races.”

Jamal Keys (@bruhmayne), a casual hockey fan, chimed in about the lack of exposure for hockey still: “The sport could improve on getting its name out there. The physicality of the sport, the toughness of it, is what makes it so interesting. Also, the type of plays that come about it are WILD. The intelligence needed to make plays of that calibre ain’t normal. I mean, not many African Americans, but that goes back to actually putting the opportunity out there, which honestly, it doesnt do much.”

Puck It Up and Blue Line Station writer Jennifer Moglia (@nhljennifer) talked about how hockey played a huge role in her life “which is something that many people would be shocked to hear coming out of a 15 year old girl’s mouth”. As someone who deals with anxiety and other mental health issues, Jennifer noted that “watching the sport has come as a welcome distractions for me over the years, serving as a getaway from everyday life”. She also noted that there’s been a lot of progress made in terms of diversity, with the rising popularity of both the NWHL and CWHL, as well as You Can Play “getting involved with those  leagues as well as the NHL for events like Pride Night”. However, she feels that racial diversity “is an area that all leagues can improve on. I’ve seen some teams do ‘International Night’ to celebrate cultural diversity, but a specific acknowledgement of [People Of Color] for Black History Month would be a cool development”. Finally, she noted that the NHL could take even bigger strides in the LGBT+ community, saying they should “actually try to end homophobia and discrimination in and around the league and its fanbase”.

Teal Town USA’s very own Erik Kuhre (@Puckguy14) said he likes “the progress it’s started promoting programs like You Can Play, appreciate Willie O’Ree’s diversity programs.” He says it’s giving more ice time and exposing “kids of everywhere to the game.” He also gave kudos “to the NHL for trying to have ‘hockey is for everyone’. However, he also said that we still need to do more to “expand and grow the game”, that the aforementioned programs have to, essentially, kick it up a notch. That being said, Kuhre notes that we still have a long way to go, despite the positives, which I wholeheartedly agree with. He noted examples of the Philadelphia Flyers’ Wayne Simmonds getting thrown bananas in a preseason game as well as a class clip of the Penguins calling then-North Stars’ player Brian Bellows gay epithets.

Before I move onto other fan responses, one of which also points out the issues that the league (and quite frankly the sport) still faces in trying to promote diversity in hockey, Kuhre gave me an article on NBC Bay Area that was written and published earlier this year by Marcus White, saying that while the NHL has taken strides in promoting the game for everyone, there’s “still a long way to go until hockey is truly for everyone”, as the article is titled. Again, I completely agree.

While there’s still a lot of growth in the league and teams spreading positivity about the sport, it’s not always been puppies and rainbows. In fact, more times than not with the decisions that have been thus far in terms of being more inclusive, the NHL has had some people scratching their heads.

For example, the article points out an incident with the Ducks’ Ryan Getzlaf in which he used a homophobic, sexist slur at an official in the postseason. The NHL opted to fine the centerman rather than suspend. The Habs’ Andrew Shaw has been in trouble with the league for similar incidents, and you put that together with the fact that the former Blackhawk was named his team’s ambassador for You Can Play. Not a great look at all.

That brings me to the next response that I’d gotten from a friend, Jason Ki Joon Byun (@JKJByun), who said, “Honestly, I think the diversity stuff is nice in theory, but it seems more lip-service than an actual thing that teams care about. We’d care more about policing things like homophobic slurs and institute and enforce an actual strict domestic violence policy if the NHL actually cared about the LGBT community and women.” He goes further, doubting that promoting diversity won’t really “take off until teams start caring about it in actuality. But homophobic language is empty apologies and light fines, not actual consequences”.

Still a Long Way To Go

I’ve made mention of a lot of positives and negatives in hockey trying to be more inclusive and welcoming for all communities, and the truth is there’s also so many more communities that could fit right in. For example, we don’t hear much about the First Nations people in hockey. In fact I recently saw an article that talked about some hockey groups up in Manitoba, Winnipeg getting into trouble with First Nations hockey players. They were accused of blatant racism for forming a league that left out the First Nations people.

In the long run, we all love this sport. We love watching our favorite players and teams go at it. We love the skill set and the talent that’s displayed out on the ice, the sound of the skate blades carving the ice surface, the puck hitting the blade of hockey sticks, all that. But thinking about all the problems that hockey has with promoting diversity, it’s not just a sports thing. Again, I stated this way earlier in the article. It’s a society issue. People do stupid things, and say things that are extremely frowned upon.

When you’re playing a sport or doing anything you love for that matter, you want to feel comfortable. You want to feel welcomed and not have to be hated on because of the way you look or who you are or what you believe. Hockey’s a game that should be for everyone. It’s a family game. It doesn’t have to be like the NHL where you have crushing hits or all these controversies with concussions and whatnot. It should be a sport that everyone enjoys. And you know what? I love what the NHL has attempted to do, along with other leagues. I just wish they’d do more.

Thank you to everyone who provided responses! Special thank you to Jennifer, who as I mentioned is a writer for two blogs, Puck It Up and Blue Line Station, both of which you can check out. If you haven’t already, check out her awesome article up from a while back on mental health in hockey, as well as her other editorials written on both sites! Also, thank you to Puckguy, who occasionally hosts a Sharks live interactive postgame show called Teal Town After Dark on the Teal Town USA YouTube channel, which you should totally check out and subscribe to.