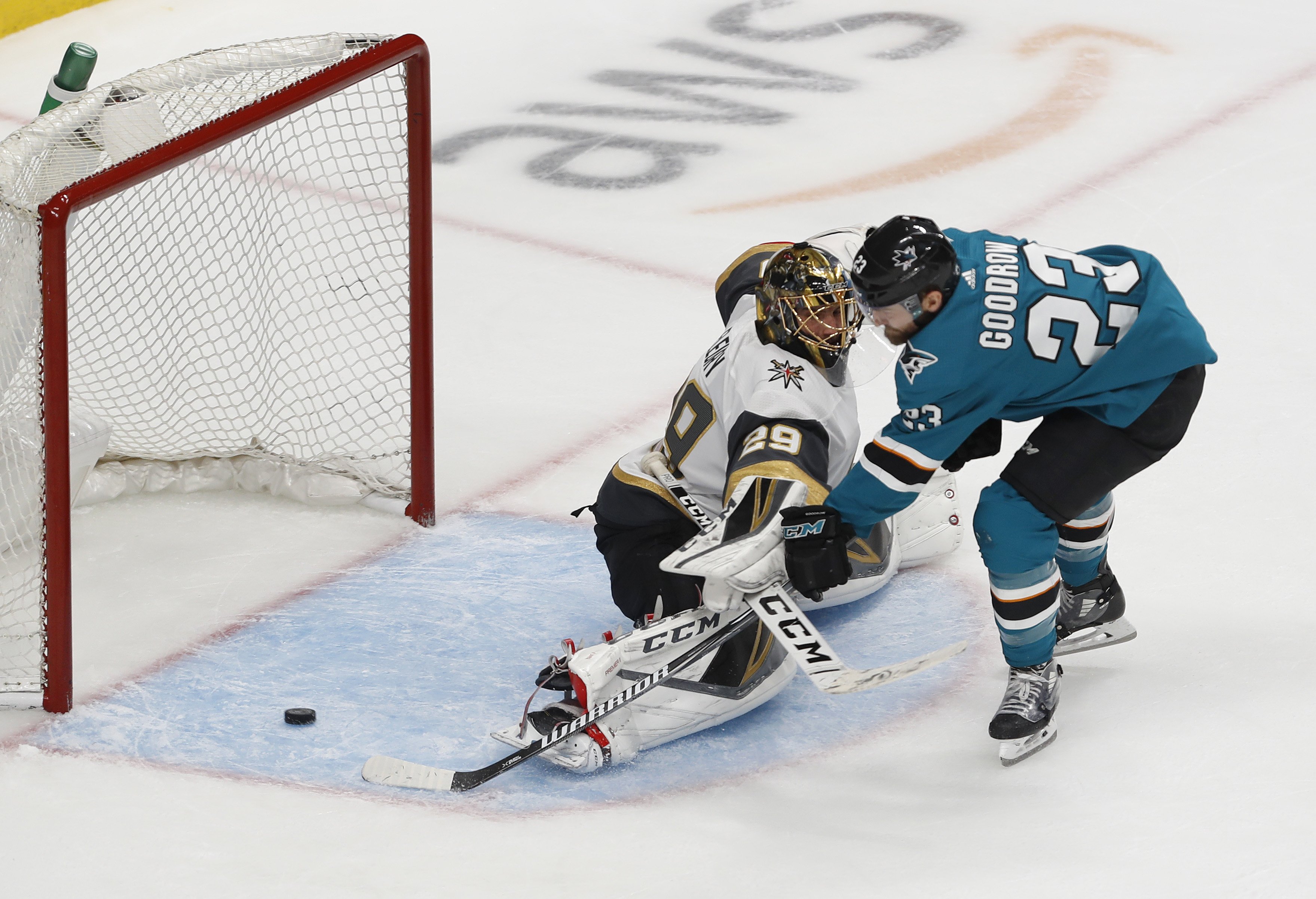 Welcome to the NHL, Vegas Golden Knights. Believe it or not, you’ve joined a league officiated by human beings required to make judgement calls in seconds. After your remarkable run during your inaugural season, you probably thought every season ends with a parade of unicorns and puppies, all under a double rainbow. Well, I hate to break it to you, but that’s the exception, not the rule. Every year, for 30 teams, it ends in heartbreak and tears. Maybe your cup run in your first season was the worst thing to ever happen to you and your fans. You never had to experience mediocrity early on in your franchise. Ask any San Jose Sharks fan about their first 2 seasons in the league. It’s the polar opposite of what you’ve gone through.

Let me preface this by saying this is not a troll post. I’m not writing this article with visions of stirring the pot dancing in the back of my mind. I’m merely offering more context of how officiating impacted the overall series.

Couture not only has a goal taken away, but also receives a call for goaltender interference, leading to a Golden Knights power play that Vegas scores on.

Overhead shows Couture trying to get to the spot he should be at for a screen, however Fleury is out toward that spot, which he is allowed to be at. Crease or no crease. Refs say penalty was going to be called before puck went in… how? #SJSharks #VegasBorn #NHL pic.twitter.com/Okda7Jzpuz

If Fleury stays in his crease, contact would not be made by Couture. Considering what happened with Calgary and Toronto in Round 1, and statements by many around the NHL, this was a bad call that should have given the Sharks a 4-3 lead early in the 2nd period. But the primary factor for the Sharks loss in this game was San Jose giving up 2 short-handed goals, not this singular call.

Later in the game, Joe Thornton takes a high stick that goes un-called.

Another no call for the #SJSharks The postgame presser should be a good one. pic.twitter.com/dwPAC37U7p

You will also remember in Game 3, McNabb gets a head shot on Justin Braun that went un-called. Later in the game, Thornton would get a head shot on Tomas Nosek which led to both a penalty and a one game suspension. Was Thornton’s hit more egregious than McNabb’s? Absolutely. Should both have been called a penalty? Absolutely.

Now we have Erik Karlsson getting a stick to the face that went un-called.

We also see interference by Ryan Reaves on Timo Meier that went un-called.

As you can see, there were several discrepancies in Game 3, but when a game ends 6-3, you’d be hard pressed to find anyone to blame that on officiating.

Timo Meier gets called for high sticking… and it was absolutely was high sticking. This will come up later in Games 5 and 6.

A pissed off Timo goes off for hi-sticking #SJSharks pic.twitter.com/oWMqI0kw4a

Erik Karlsson called for tripping William Karlsson. You can debate whether it’s a slew foot, but it’s certainly not a trip. Again, this will come into play later in Game 6.

Erik Karlsson gets a penalty because William Karlsson falls down. #SJSharks pic.twitter.com/Hgu86oA2Dh

Couture takes a high stick to the face and actually has teeth knocked out. Vegas coach, Gerard Gallant, complains about the call and gives the officials a sarcastic “thumbs up” to the refs after the Sharks score on the ensuing power play.

Evander Kane is tripped in front of the ref. No call.

Tomas Nosek trips Brenden Dillon to the point that Nosek’s stick gets lodged in Dillon’s skate. No call.

Marcus Sorensen is flat on the ice and Colin Miller continues to check him. No call.

We see what you're watching, ref… #SJSharks pic.twitter.com/2lpYaYuVhL

Justin Braun is tripped. No call.

Timo Meier is called for tripping. Was it a good call? Yes. Did it also highlight the previous trips in the game that went uncalled? Yes.

After all the missed trip calls by Vegas, #SJSharks Timo Meier gets called for tripping. pic.twitter.com/7m3P2mG4qu

Marchessault gets called for slashing, although it should’ve been a high sticking call, and then complains about the call. Vegas coach Gallant later implies Couture may have embellished. Sharks coach, Peter DeBoer would then accuse Gallant of chirping his players, specifically Logan Couture. Gallant responds by calling DeBoer a “clown” in a following press conference.

Marchessault slashes Couture and then complains about getting called for it. #SJSharks on the power play. pic.twitter.com/zYqppKc729

Labanc is tripped. No call.

Barclay Goodrow slashes Brayden McNabb and Golden Knights get the only power play awarded during both overtime periods. During this Vegas power play,  Tomas Hertl scores a short handed goal to send the series to a Game 7.

Goodrow gets called for slashing. #SJSharks on the penalty kill. pic.twitter.com/mXU1F6SPFg

Kevin Labanc is tripped and then cross checked. No call.

Shea Theodore interferes with Evander Kane. No call. Would it have been an incredibly soft call? Absolutely.

Ryan Reaves is called for tripping Martin Jones, taking his only minor penalty in the series. I actually thought this was incidental contact and should not have been called.

Incidental contract between Reaves and Jones, but Reaves gets called. #SJSharks on the power play. pic.twitter.com/Tmkk7lkcjv

Cody Eakin scores a goal that appears as if it should have been waived due to a high touch. Several NHL personalities including Aaron Ward agree. However, goal is reviewed and awarded after no definitive proof either way and teams play on.

Vegas maybe makes it 2-0, but it's under review for a high touch. #SJSharks pic.twitter.com/jBADw4G0IC

Halfway through the 3rd period, we then get the Eakin/Stastny shot on Pavelski. The Vegas Golden Knights give up 4 goals in 4:01 of a 5 minute major call becoming only the 2nd team in NHL history to allow 4 goals on a 5 minute major. This would give the Sharks a 4-3 lead until Marchessault would tie the game with 47 seconds left to send the game into overtime.

Did the officials get the call on Cody Eakin wrong? Yes. Eakin should’ve only gotten 2 minutes for a cross check. It was Paul Stastny who should’ve gotten the 5 minute major. As you can clearly see in the gif below, it is Stastny that not only hits Joe Pavelski as he’s flailing backwards from the Eakin cross check, but Stastny thrusts down with his hit, not out.

From Wikipedia: The NHL defines a cross check in their Rule 59 as “The action of using the shaft of the stick between the two hands to forcefully check an opponent”. Within the context of the NHL, the referee again decides what the severity of the cross-check was and how the penalty shall be served; the referee may impose a minor penalty, major penalty with an automatic game misconduct, or a match penalty. If a major penalty is assessed for the cross-check, an automatic fine of $100 is assessed as well as misconduct is imposed as well. A match penalty is assessed for a cross-check if the referee feels that the offender aimed to deliberately hurt or injure the opponent. The Commissioner may also place more fines or suspensions on the player if deemed appropriate.

As you can see, it’s the referee’s discretion as to how to make the call. Whether it was a good call or a bad call will be debated for decades. Vegas Golden Knights general manager George McPhee says the NHL reached out to him and apologized for the officiating in Game 7 against the San Jose Sharks. No official statement has been issued by the NHL, but the two referees who called the game, Eric Furlatt and Dan O’Halloran, are not scheduled to work Round 2 of the Stanley Cup playoffs. Despite the apology for the ref’s decision, the call happened. I wonder if 1999 Buffalo Sabres ever got a call from the NHL about those officials.

After just over 18 minutes played, Barclay Goodrow ends the game and the series.

The point is… officials make mistakes. Did they make mistakes in many games of this series? Yes. And the refs of all sports make mistakes. Teams suffer the impact of those calls and no calls and sometimes your team is the windshield and sometimes your team is the bug. But the bottom line is that the officials didn’t allow 4 power play goals in 4 minutes. The officials didn’t allow Tomas Hertl to score a short handed goal in double overtime of Game 6. The officials impacted this game and this series, on both sides, without a doubt. In the final analysis, Vegas had 3 games to finish the series, including being awarded a power play in double overtime in Game 6 at T-Mobile Arena. And at the end of Game 7, both teams had 18 minutes worth of overtime chances to win the game. Despite postgame comments from Jonathan Marchessault, as Ken Campbell said, the officials didn’t cause the Vegas Golden Knights to lose.

The Vegas Golden Knights are not the first team to allow their opponent to overcome a 3-1 series lead. They are the 29th NHL team to do so since 1942. However, the Vegas Golden Knights now hold the distinction of being only the 2nd team team in the history of the NHL to allow 4 goals during a 5 minute major penalty, per Jamie Baker.

Martin Jones Is the Problem
Felix’s Hockey Takes: A Word on Hockey Fandom