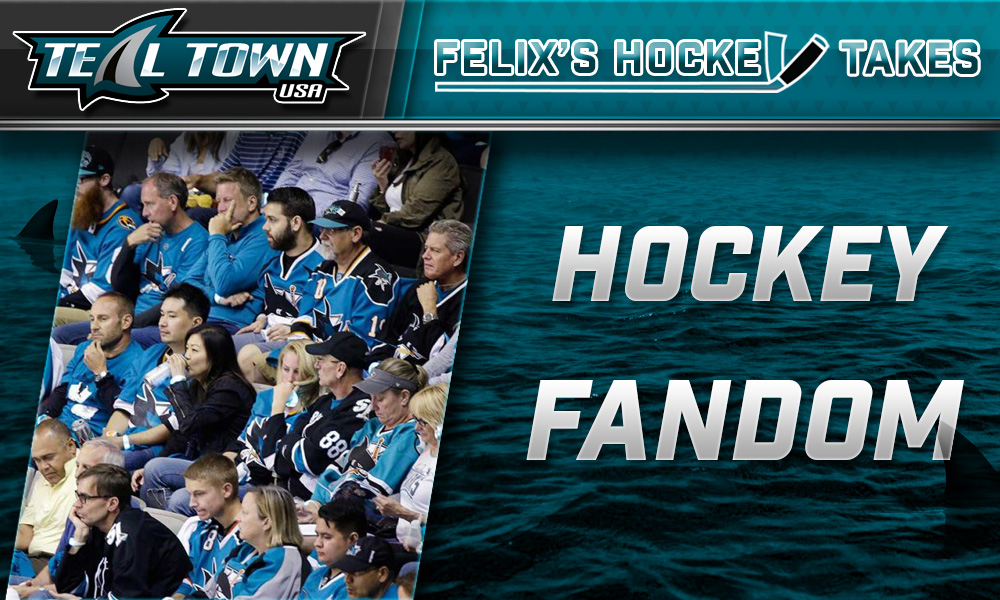 Let me preface this article by saying that I’m not here to tell anyone on social media how to be a hockey fan. You can do whatever the heck you want, but there are some things I’ve seen over the past months that have crossed the line a couple times.

Hockey is an amazing sport. We love watching this great, sometimes stupid game. We cheer on our favorite teams and players. We boo the teams and players we don’t like, or even the penalty calls we very much dislike. Most importantly, we have fun talking about hockey, going to games, and getting to meet new people, even in person.

That said, there are always going to be bad apples. It doesn’t even have to be exclusively hockey. There are bad apples in every sport, in every fan base, to ruin an experience at a sporting event.

Though I really don’t want to talk about it anymore, I have to. The first round series between the San Jose Sharks and the Vegas Golden Knights is the perfect example of bad apples on both sides. In my experience, there were more trolls on the Vegas side than in San Jose.

Early on in the series after Game 2, I was waiting on the interactive postgame show, Teal Town After Dark, that’s regularly scheduled after every Sharks game (that’s your hint to subscribe, by the way, if you haven’t already), and I noticed a follower quote retweet a Vegas media member who had mentioned the alleged hostility at SAP Center.

If you’re a Ducks or Kings or Stars or Redwings fan. Can you please tel me if you have had unpleasant experiences in San Jose.

Why did I mention those teams? Because they are our rivals from the past. And I have not heard anything from them EVER until Vegas came into town https://t.co/dPpcdPxdA6

That was just one of many tweets from the Vegas fan base about the fan experience at the Tank. Here’s another.

Wish I’d listened to @SharkyGreen & @SaucyDanielle, absolutely terrified by the abusive & aggressive Sharks fans at the game in San Jose tonight. Scary place to be an opposing team’s fan. Will never return to the @SAPCenter these guys were the worst of all of them. pic.twitter.com/HFTSvL3ZQl

However, she did later tweet this reply in another thread:

Let me clarify I’m not saying ALL Sharks fans were awful, as we had some good-natured chirping with a few.

There were also other anti-Sharks tweets as one took aim at the Sharks’ organist.

In case you were wondering…this is the sorry excuse for in-arena entertainment in San Jose. An old dude playing Foreigner on an organ.

As the series progressed, the rivalry got worse and the accusations ramped up big time.

This is what I have to say about that. I started watching the Sharks in 2010. I’d say I went to my first preseason hockey game in 2011. I probably went to my first regular season game the following year. Over the years, I’ve also written for a few blogs, namely FanSided’s Blades of Teal and, of course, Teal Town USA (formerly Pucknology). Ever since my first regular season game, meeting the Sharks Twitter family at the first intermission tweetups, I haven’t regretted going to a single Sharks game. On top of that, the overall fan atmosphere was great. People were friendly. No one was rude. We all had lots of fun.

Now, granted, I haven’t had the time nor the money to go to every Sharks’ home game. I’ve seen tweets on social media from time to time where a follower pointed out that there was a fight in the stands with a fan of the opposing team. I’ve seen a tweet from another Sharks fan that showed an opposing fan in handcuffs because of a violent altercation. It’s usually either guys who are drunk and want to start something with someone from the home crowd or a troll who wants to start something for the sake of being a troll.

Also of note, in all my years of watching rivalry hockey between either the Sharks and Kings, Sharks and Oilers, Sharks and Ducks, or even when the Sharks still played the Detroit Red Wings in the postseason, I’ve never once heard a single complaint of the Shark Tank being “too hostile” for the opposing fans.

However, most Vegas fans I’ve seen on social media have been something else. If it’s not been the complaints about the “hostility” at the Tank, it’s a couple people here and there wishing harm on Sharks players.

Lastly, I don’t want to pin every dirty tweet on Vegas, because — as I’ve said — there are bad apples on both sides, and the Sharks have had their fair share as well.

(Writer’s Note: I really wish I had a screenshot of the actual tweet itself, but here’s how a fellow Sharks fan paraphrased what was said, apologies for the language)

Some “sharks fan” apparently said they hoped VGK plane crashed and the vegas shooter came back and killed Mark Stone. Like what the hell that is uncalled for i dont care who it is you dont say shit like that

Another series that I feel turned a bit nasty between fan bases is the Toronto – Boston series. It happened after Leafs forward Nazem Kadri delivered a vicious crosscheck on Bruins forward Jake DeBrusk in response to his hit on former Shark Patrick Marleau.

In the aftermath, a couple of Toronto fans flocked to DeBrusk’s Instagram and posted a bunch of malicious comments and threats that turned personal, to the point where the Bruins forward had to turn off the comments on his posts. Boston fans gathered onto Kadri’s Instagram page to say nasty things as well. Noted diehard Leafs fan, YouTuber and SportsNet contributer, Steve “Dangle” Glynn, had a brief rant towards hockey fans about the social media harassment.

Was watching @Steve_Dangle video and this part is spot on. pic.twitter.com/KWw38IcWZ1

Steve Dangle does Leafs Fan Reaction videos after every Leafs game, just like we have Teal Town After Dark.

In a previous FHT, I talked about the ensuing social media ugliness after Canada was eliminated by Finland, largely from a missed penalty shot by Canada captain Max Comtois.

Like anything in life, social media and the world of sports fandom can be a beautiful thing when done properly. I think Jonathan Becher put it best in his latest post on the San Jose Sharks official blog:

It’s one thing to have unwavering support for your team; it’s yet another to lash out against supporters of another.

If you want to know more about his thoughts on this exact topic, I have it linked above. Again, I’m not here to tell anyone how to be a fan. What I am saying, however, is … as our own Chris S. put it … be better, hockey fans.