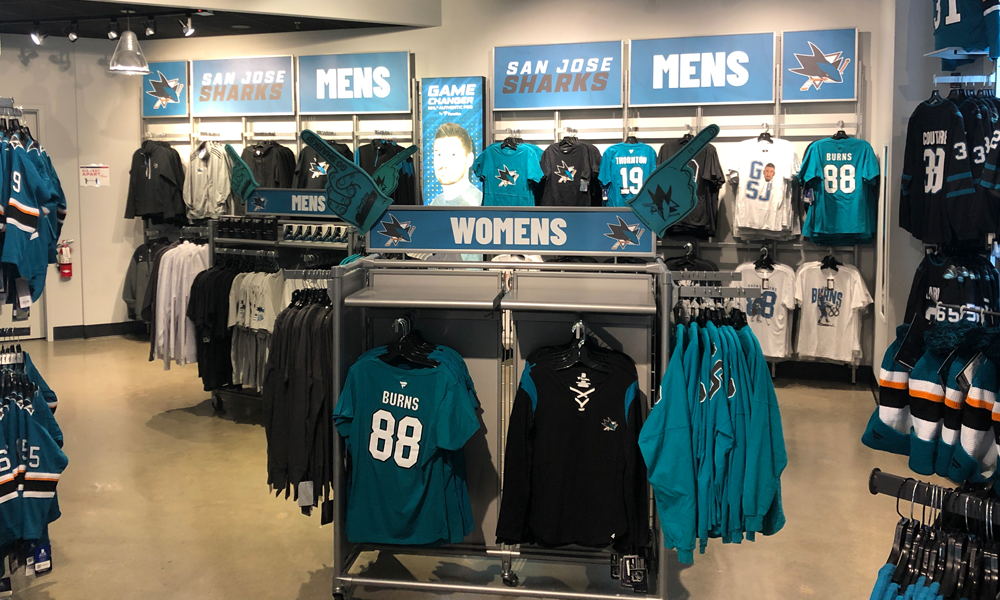 In 2016, the Sharks signed an 8 year deal with Fanatics to run the Sharks Store at SAP Center and merchandise kiosks around the arena. In an exclusive interview today with San Jose Sharks VP Doug Bentz, we’ve learned the Sharks have parted ways with Fanatics and are returning to running their own merchandising with a new partner, effective February 1st, ending the deal just halfway through the agreement.

Fanatics will continue to be an official partner with the NHL and produce merchandise for league events like the Outdoor games in Lake Tahoe next month, All Star Games, and Stanley Cup playoffs. However, the Sharks now join teams like the Vegas Golden Knights, Anaheim Ducks, and Arizona Coyotes in running their own merchandising locally. In fact, only New Jersey, Philadelphia, and Washington currently have Fanatics contracted to run their team stores.

What Does It Mean For Fans?

The Sharks will now oversee their merchandise designs and manage their own inventory and quality control. This move returns full command of their own product sold at the Sharks store, the kiosks around SAP Center, and on their site, SJTeamShop.com. The online presence of SanJoseSharksMobileShop.com, previously maintained with Fanatics, will be discontinued soon. Items from the Sharks Store featured on the Mobile Shop website will soon be moved to SJTeamShop.com.

“Our desire is to really service our fans, give them what they want, and be real responsive to their needs regarding merchandise”

These changes will allow the Sharks to better capitalize on occurrences such as a player breaking a record, a new player being added to the roster, or some rare event like Jo PAWvelski. The Sharks can now inject some inspired and creative designs to their swag such as the Sharks Freak design or utilizing their popular 90’s chomp font. Doug even mentioned working with local artists, and even fans, for designs as they develop new merch. Bentz also hinted that fans may see use of the old logo and graphics in new ways we haven’t yet seen before.

The Sharks Store will still feature Fanatics-produced ‘Breakaway’ jerseys, but this change opens the door for fans to get one-of-a-kind designs rather than the homogenized styles previously offered. Furthermore, Bentz explained that there might be some crossover between the Sharks Store at SAP and the Pro Shop at Solar4America Ice, but both venues will still retain offerings unique to their shop.

*Updated Jan 28* Fanatics-owned sites such as NHLShop.com will continue to carry Sharks merchandise but likely will not feature all the items available locally.

For fans that enjoy specialty jerseys and in-game auction items, such as the aforementioned Sharks Freak jersey, look for some of those items to be auctioned off using SJTeamShop and the Sharks app. Some items normally sold during the annual equipment sale will also be available on SJTeamShop.

Look for the changes to begin February 1st. Changes to the store at SAP are set to begin this week. Check out the talk with Doug Bentz below.