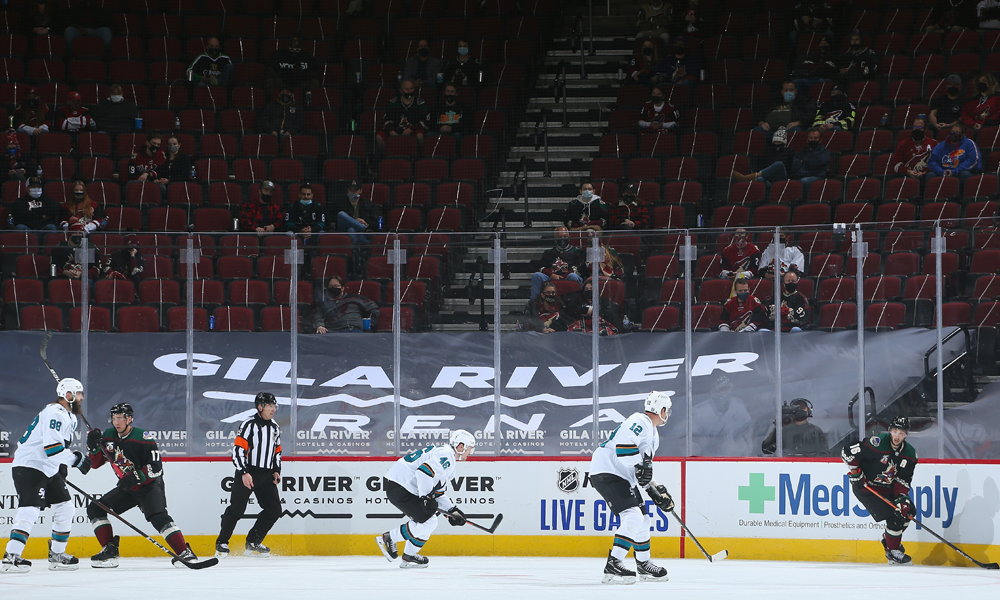 NHL Hockey in the COVID-19 Era

The Show Must Go On

The calendar has flipped to 2021. However, the coronavirus is still around. Despite that, the National Hockey League has decided the show must go on. After all, the league must make up for lost revenue.

The end of the 2019-20 season had to be pushed back because of the virus, and so too did the start of the 2020-21 season. Just as there were a lot of questions for last postseason, there were just as many questions for the current season. When would the season start? Would there even be training camp? How would the standings work? Would travel be allowed for teams during the regional government lockdowns? More importantly, would player safety continue to be guaranteed during the COVID-19 pandemic?

All those questions were answered by the league, and we are now well into the shortened 56-game season, with four divisions to work with and no cross-country travel (unless you’re a player that’s been traded from an East Coast team to a West Coast team, vice versa). With the regional lockdowns and stay-at-home orders, plans have had to change for certain teams as well, not just the National Hockey League.

The San Jose Sharks, for instance, opened training camp at the Ice Den in Scottsdale, AZ solely because of the stay-at-home orders that were in place throughout Santa Clara County, home to SAP Center and the Sharks’ practice facility, Solar 4 America Ice. It should be noted that as of January 27th, the team has been given the OK by the county to return to the Shark Tank for home games starting February 13 against the Anaheim Ducks, with no fans allowed. However, the first home games against the Vegas Golden Knights (February 1st and 3rd) will officially be played at Gila River Arena in Glendale, AZ. Also of note, per the NHL Public Relations department, is that tonight’s game between the Golden Knights and the Blues has been postponed as a result of a player and a member of the Vegas coaching staff going through the NHL’s COVID protocols. It should be interesting to see how that could potentially impact the games between the Sharks and the Golden Knights for both of San Jose’s home games.

Unfortunately, unlike the first time around when the NHL decided to have the 2020 Stanley Cup Playoffs in two Canadian bubble cities, Toronto and Edmonton, there are no bubble cities for the 2020-21 season. Those two cities were chosen, at the time, as they were deemed the safest locations among other North American cities to host sporting events. The United States then had a very high positivity rate, which was only trending upward.

There have been reports of NHL players testing positive, including an outbreak for the Dallas Stars, which ended up having their start delayed to January 22nd during which they shut the Predators out 7-0 in their home opener. This is likely due to there being no bubble cities. At first glance, it’s not great that there was an outbreak for Dallas. However, if you really think about it, that is what happens when you don’t have bubble cities so that you can better isolate the players. That being said, the league’s health professionals have done a great job so far in getting quarantined players and staff back to health and doing their jobs, as well as working with the league to prevent further outbreaks. Of course, time will tell how long it will be before another one happens.

The Future of Attendance at Live Hockey Games (& Sports In General)

When you watch a live televised NHL game now, with the exception of Dallas, Sunrise, FL, and Arizona, you’re going to see empty stands covered in tarp. I’m interested in seeing how long that will last. How long before health officials decide that stadiums can be filled at full capacity again? Switching gears for a minute to the NFL, I remember looking up tickets for this year’s Super Bowl a few nights ago between the Tampa Bay Buccaneers and the Kansas City Chiefs, and seeing that there’s limited attendance for the game. So, clearly, city officials and teams are continuing to coordinate towards being able to have all fans spectating live sporting events again.

There are other questions as well, such as what will the protocols be for when fans are allowed back in? Will there be an abundance of hand sanitizers readily available when you enter the building? Also, what is the future of fans being able to attend practices and getting their jerseys and memorabilia autographed by their favorite players, and taking pictures with them? Will everything still have to follow proper COVID protocol, with sanitization and social distancing, or will teams decide to shut fans out from practices altogether?

With vaccine distribution underway, some federal health officials have been saying that we should be getting back to some sense of normalcy by the fall season. Whether or not that will be the case remains to be seen, but I also would not be surprised if what we’re seeing right now is essentially the new normal for us.

This year, the league has decided to add more advertising by placing sponsor names on player helmets, tarps covering empty seats, and having sponsored standings. As I mentioned before the NHL needs to make up for lost revenue due to COVID-19, so this is the way they’ve decided to do it.

I honestly wasn’t sure what to make of having company logos stuck on the side of a player’s helmet, but I don’t mind it. It’s not like they’re super noticeable either, as the stickers are rather small enough. I get the concern, however, that this is only the tip of the iceberg for the league. For those who don’t know, the hockey teams overseas in Europe have long fully embraced having ads on their jerseys. Could the NHL be headed for that direction as well, or is this really just a one-time deal as Commissioner Gary Bettman insists it is? For the time being, I’m fine with the current ads on the helmets.

As far as sponsored standings go, I can’t say I saw that one coming, but again I understand why it had to be done. All in all, this is just a necessary evil so that the league can make profit to make up for lost monetary wages.

Aside from all the off-ice changes, there have been a few on-ice rule changes this year as well. The offside rule has been modified so that the officials don’t have to spend ten minutes trying to figure out whether or not a goal was offside. Basically, the on-ice officials and the Situation Room in Toronto don’t have to look directly at how far a player’s skate is off the ice along the blue line to determine if he was onside or not.

Per Scouting The Refs, Rule 83.1 has been updated as follows (the update being underlined):

A player is on-side when either of his skates are in contact with the blue line, or on his own side of the line, at the instant the puck completely crosses the leading edge of the blue line.

A player actually controlling the puck who shall cross the line ahead of the puck shall not be considered “off-side,” provided he had possession and control of the puck prior to his skates crossing the leading edge of the blue line.

Previously, the player’s skate blade couldn’t lift off of the blue line, and the broadcasting cameras would literally have to zoom in to show the viewers and commentators whether or not said player was offside. It was a mess, and highly counter productive to the original goal of the initially implemented offside rule. As TSN’s Ray Ferraro put it during a World Juniors telecast earlier this year, Matt Duchene “was 30 feet offside”.

Rule 87.1 on timeouts has been updated as follows:

No time-out shall be granted following a face-off violation.

Teams previously could not change players after a shot from beyond the center ice red line or when a defending player dislodged the net.  Now they are also no longer allowed to take a time out.

The league also introduced the hand signal for fighting, which is basically the image below:

Hand signal for fighting introduced for the 2020-21 season, courtesy of Scouting The Refs

2020 was an absolutely crazy and insane year. There were so many things that happened, including — of course — the coronavirus pandemic. Many people have grown restless from the stay-at-home orders, and I don’t blame them. I think we all are. With the 2020-21 season finally under way, we have our distraction away from the craziness of the world outside of sports.

That is in no way nullifying the importance of various current events in the world. They still need to be acknowledged. There is no place for hate in the hockey world or anywhere. We here at Teal Town USA have always prided ourselves in respecting others’ opinions (no matter how wrong some of them may be). It’s why we’re a family, and why Erik Kuhre, Erik Landi, and AJ Strong love to put together live postgame shows for us. We are, after all, a podcast by fans, for fans. We love talking hockey indiscriminately, and welcome everyone to our live shows, including those who cheer for the opposing team!

As always, I want to take a moment to thank all the frontline workers out there, including Puckguy himself. These are not easy times, people, but we will get through this together, and enjoy hockey talk as a community. No matter how bad things get, here’s to the 2020-21 season.