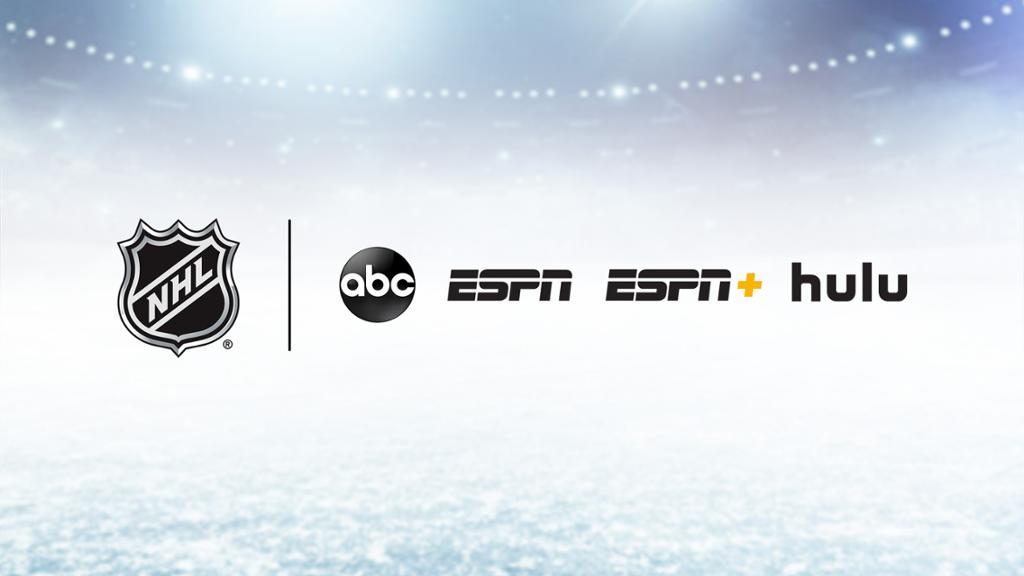 A New TV Era for the NHL

For 16 years, NBC was the rights holder for the NHL, with extensive coverage that included all four rounds of the Stanley Cup Playoffs, the Winter Classic, the Stadium Series, the NHL All-Star Skills Competition, NHL All-Star Game, and other select games throughout the regular season. Starting 2021-22, ESPN will once again be the home of NHL hockey, bringing hockey back to the network for the first time since 2004. The NHL and ESPN agreed to a seven-year deal in March.

As part of the deal, 25 regular season games will be airing on either ABC or ESPN, with coverage of early-round playoffs, one conference final each year, four Stanley Cup Final games on ABC, and more than 1,000 games per season streaming on ESPN+. ESPN+ and Hulu will carry 75 ESPN-produced exclusive telecasts per season. International rights and extensive highlight reels for ESPN’s digital platforms are also included. The Stanley Cup Final will be televised on ABC in 2022, 2024, 2026, and 2028. The NHL.TV subscription will also be merged into the ESPN+ digital package.

With most of the rights going to ESPN, the remaining TV rights went to Turner Sports, which carries TNT and TBS. On April 27th, a deal was announced with Turner Sports for seven years, which would see both TNT and TBS air regular-season, Stanley Cup Playoff, and Stanley Cup Final games. As part of the agreement, the Turner Sports networks will be the new home of the annual Winter Classic outdoor game on New Year’s Day for all seven seasons. Both TNT and TBS will air Stanley Cup Final games in 2023, 2025, and 2027. The scheduling and programming will be determined in the coming weeks, according to WarnerMedia News & Sports chairman, Jeff Zucker.

Earlier this year in January, there were reports of NBC Sports Network shutting down by the end of this calendar year. The NHL’s deal with NBC was set to expire this year as well. It would have been interesting to see where else hockey would have been relegated to, aside from USA Network, where many live sporting events would relocate to, had the NHL stuck with NBC. I also wonder if NBC’s analysts, like former NHLers Patrick Sharp, Anson Carter, and Keith Jones among others, will make guest appearances on ESPN or TNT as hockey analysts on national broadcasts. It’s certainly curious to see where they’d end up after NBCSN is no more. Could certain analysts like Bob McKenzie make an appearance on either network, like he occasionally did with NBCSN for either select games or events? It’s a possibility.

Once the current TV deal between the NHL and NBC expires, the NHL has decided to split their next deal into two separate contracts, hence why there were two official agreements announced. There’d been rumors that ESPN had long been vying to get back into the hockey world. For a lot of us hockey fans who know what ESPN became after the network lost its rights to hockey, we know that the network could care less about the sport. On a personal level, and I’m sure others have seen the tweet replies before, when I’ve looked at any of ESPN’s hockey tweets, it’s always been some form of “not a sport”. I’ll address this more a bit later in this article, but for right now, I’ll just say that ESPN getting hockey back is huge.

ESPN, of course, wasn’t the only major sports network wanting to get in on the NHL coverage sweepstakes. Before Turner Sports eventually got the nod with ESPN, FOX was another network that wanted a slice of broadcasting rights. Finally, for a little while, NBC did try to negotiate with commissioner Gary Bettman for continued rights to the sport before the deal fell apart.

As I’d mentioned previously, ESPN getting hockey back is a big deal. I’m a huge proponent of growing the game. I love hockey as much as the next fan. One of the biggest flaws of the NHL has always been the inability to market its players. Everybody knows who Sidney Crosby is. Everyone who even watches casually knows who Wayne Gretzky is, and even if they don’t watch hockey or follow it religiously, they’ve likely heard the name before.

Since 2004, ESPN has been known for its coverage of basketball, football, and other sports that aren’t hockey. Every sports fan who watches ESPN or any sports channel has heard the name LeBron James a trillion times, or Steph Curry, or Kobe Bryant (Rest In Peace), or Tom Brady. Unfortunately, Turner Sports’ lack of hockey knowledge had also shown recently when TNT touched a bit on the new upcoming TV deal with the NHL, the graphic they showed had a picture of Alexander Ovechkin and former NHLer Andrew Ference side by side, and not Ovi with current Oilers’ captain Connor McDavid.

All I’m saying is that if whoever made the graphic had actually done their research, it’s not that hard to figure out that McDavid is the current captain of the Oilers! Another note in the graphic, especially for the jersey aficionados, is that you can clearly notice Ference wouldn’t even be wearing the current Oilers jersey. So, again, how do you screw that up?

Furthermore, Shaquille O’Neal was tested on his knowledge of the NHL. He didn’t do too bad, I’d say, as someone who isn’t incredibly versed in hockey. On that same token, I’ve also set the standards incredibly low, because again, when’s the last time before next season ESPN actually cared about hockey? Either way, you can read about the rest of that promo segment here.

A Game Changer for Hockey

The point I’m trying to make is that hockey still has a long way to go before more people start to take it seriously. It’s a niche sport. I’ll say that. It’s easier to get into sports like basketball, baseball, football, and soccer. You’re basically taught how to properly shoot hoops, or swing at the ball when the pitcher is throwing at you, or how to properly throw a football so that your teammate can catch it without it being intercepted.

That being said, this sport has come a long way. Two seasons ago, I wrote about the growth of the game, as well as how diverse it’s become. Further to that, you look at how college programs have grown over the years in the U.S. on the East Coast, like UMass and Boston University. You look at the recent progress of the U.S. National Team Development Program. You look at San Ramon native Auston Matthews getting drafted by the Toronto Maple Leafs in 2016. It’s definitely made progress in this country.

This new deal has the potential to be a game changer for the league. While ESPN has shown numerous times that they have a ways to go before us hockey fans can take them seriously, I know they have on-air talent that know their stuff about hockey. To be fair, their NHL web content is pretty decent as well. But, it would honestly be really nice too if their other analysts knew a thing or two about the sport, to help grow the sport even further than where it is now. Funnily enough, the deal comes after ESPN’s Max Kellerman’s comment that no one watches hockey on TV. I wonder if he regrets that comment now.

I’m interested to see how ESPN handles hockey coverage the second time around, given that I wasn’t a hockey fan the first time ESPN covered the sport. I also hope that the televised coverage will quell all the trolls and haters. Perhaps it’ll bring more NHL-related social media content to the main ESPN Twitter account as well.

I also think it’s very interesting that hockey is now on TNT and TBS, which are known for airing NBA games. I’m very curious to see what the schedule ends up being, and how the two sports will end up competing against each other ratings wise. Basketball, for sure, will be the more popular of the two, but will the NHL hold up well enough on Turner Sports? We shall see. Do you like the new upcoming deal for the NHL? Do you have any concerns about the deal going into next season, such as the on-air knowledge and entertainment level? Comment down below with your thoughts.