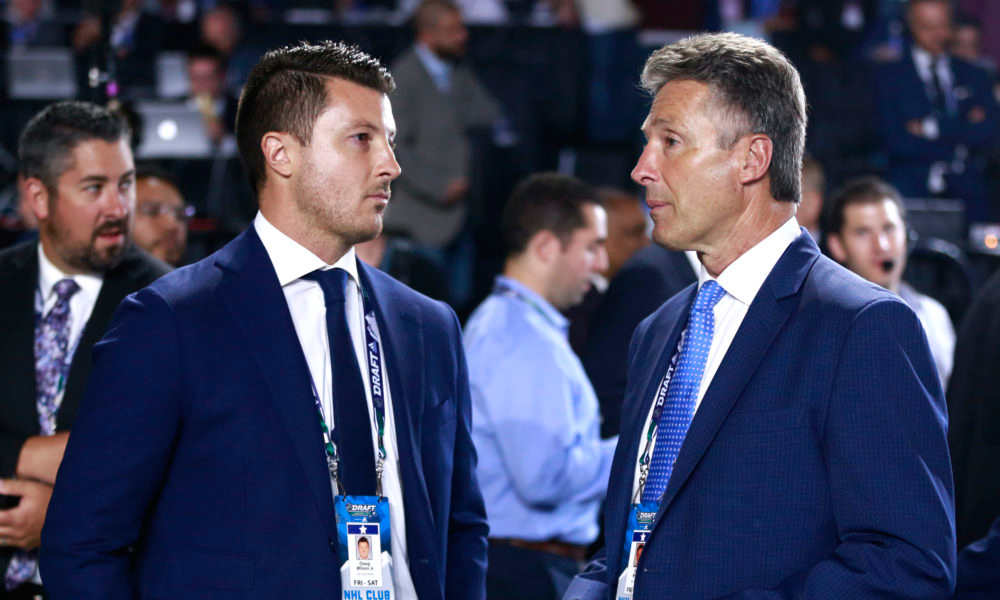 Now that the Stanley Cup has been awarded to the Tampa Bay Lightning for the second consecutive year, the off-season has officially begun.  For the San Jose Sharks, the countdown to their 31st season in the National Hockey League is underway.  Before the puck drops, Team Teal will be busy in the next few weeks rebuilding… ahem… retooling… ahem… doing a reset of the roster.

Here’s what is scheduled for the offseason:

June 9th – First Buyout Period Begins
Some Sharks fans are looking to this day as they await the word on a Martin Jones buyout.  Does it happen?  It remains to be seen, but for those hoping for some much needed cap relief with a flat cap, here’s how it works:

Teams are permitted to buyout a player’s contract to obtain a reduced salary cap hit over a period that is twice the remaining length of the contract. The buyout amount is a function of the players age at the time of the buyout, and are as follows:

Those thinking “just go buyout Erik Karlsson”, or any large deal for massive cap relief, signing bonuses are excluded from a buyout.

July 13th –  Deadline for Teams to Request Players to Waive No Movement Clauses for Seattle Expansion Draft
Sharks General Manager Doug Wilson can ask Marc-Edouard Vlasic and Erik Karlsson to waive their no movement clauses to be exposed for the Seattle Kraken Expansion Draft.  Barring a sudden change of events here, don’t expect this to happen. As for the other 29 squads, we may see surprises to try to expose unmovable players to dangle to Seattle.

July 16th – Deadline for Players to Agree to Waive NMC for Expansion
Vlasic and Karlsson, among other NHLers with No Move Clauses, have until this day to wave their NMCs, if the Sharks request it.

Players with No Movement Clauses (NMCs) are required to be protected unless they waive their NMC, meaning Vlasic and Karlsson will be protected.

Standout youngsters such as Mario Ferraro, John Leonard, Alexei Melnichuk are exempted, so no need to worry about losing top flight prospects to Seattle.

As we saw with the Vegas Expansion Draft, teams can broker deals to ensure some players aren’t picked (looking at you Panthers and Islanders.)  San Jose did something similar, back in 2000, to make sure Columbus and Minnesota didn’t take goalie Evgeni Nabokov. Sweeteners could also be added to convince Seattle General Manager Ron Francis to take a certain player.

July 17th – Seattle Free Agent Exclusivity Window
Like in 2017 for Vegas, the Kraken will have a 48-hour exclusivity window to talk free agents into coming to the Pacific Northwest.  If the player agrees to sign with Seattle, that team will no longer have anyone selected off their exposure list.

An example of this would be UFA Patrick Marleau. Patty, who played junior in Seattle, could be lured to play in the same (albeit completely renovated) arena he once played in with the Thunderbirds.  If the Sharks lose Marleau, or any player to Seattle during the signing window, they will not have a player selected from its roster during this draft as this will count as Seattle’s selection.

July 17th – 22nd – Expansion Draft Trade/Waiver Freeze
No trades or waiver claims can be made unless it involves Seattle.  Once this freeze is over, watch for trades to take place prior to the NHL Draft.

July 21st 5pm PT – Seattle Kraken Expansion Draft on ESPN2 & Sportsnet
We find out who will become a Seattle Kraken.  The newest NHL team will select one player from each of the 30 teams participating.  There are minimum requirements though:

July 23rd – 2021 NHL DRAFT Round 1 5pm PT ESPN2 & Sportsnet
Once again, the draft will be held virtually.  As of now, the San Jose Sharks currently hold the 7th overall selection in the 2021 NHL Draft.  This will be the first event for ESPN and their new broadcast deal with the NHL.

July 24th – 2021 NHL DRAFT Rounds 2-7 8am PT NHL Network & Sportsnet
San Jose, aside from rounds 2 and 3, have historically done well in the later rounds of the draft and hope to flourish and fill up their prospect pool.

July 26th –  Deadline for teams to tender Qualifying Offers to RFAs
As of July 9th, the Sharks have these players as Restricted Free Agents (per Cap Friendly):

July 27th – First Buyout Period Ends
Will Martin Jones be a Shark after this day?

Also in that time, we will have announcements for the 2021-22 preseason and regular season schedule. Will the Sharks have a development camp, that concludes a prospect scrimmage?

No matter what, we have a little over two months until training camp begins for the San Jose Sharks. While the Sharks’ reset plans might be cloudy at the moment, we will get a clear picture as we head into August.