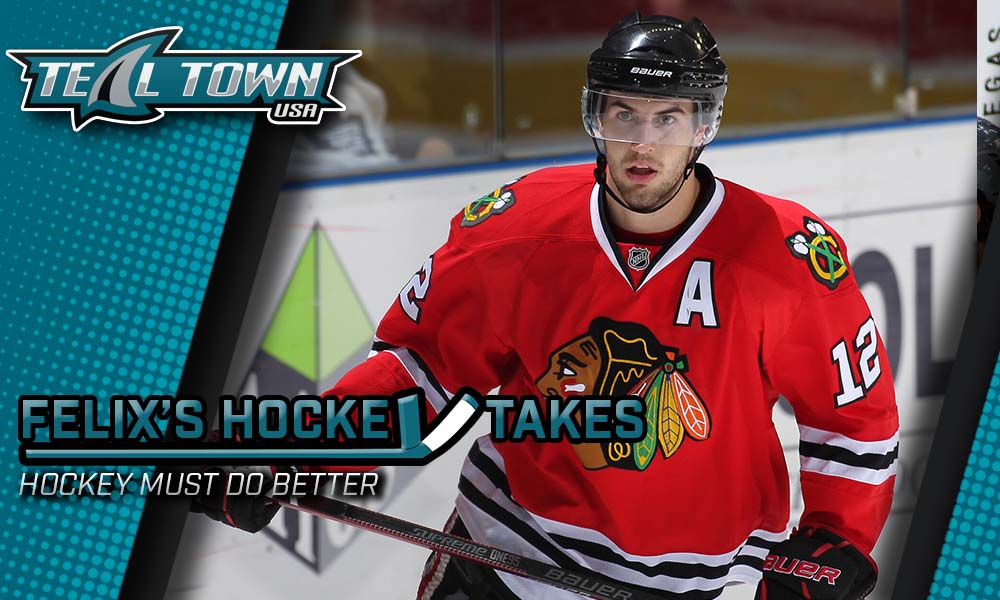 Writer’s Note: Three months ago, I wrote about the Chicago sex abuse allegations as part of an article about the toxic yet hectic offseason that was. Consider this a part two.

For the couple days that the Chicago scandal was again front and center, I struggled mentally to process everything. TSN’s Rick Westhead, who has been valiantly covering this issue from the beginning, recently interviewed one of the victims who has since come forward. The victim’s name? Kyle Beach. We all know it now as he revealed himself to be the “John Doe” in the lawsuit. It wasn’t an easy watch. In fact, it was undoubtedly the most difficult video I’ve ever viewed. But it was necessary.

The law firm conducting the investigation, Jenner & Brock, released its findings in a very graphically detailed 107-paged report (Content Warning: View at your own risk). Since then, the story has surfaced on more and more news outlets.

Following the report’s release, former General Manager Stan Bowman has since stepped down as did Senior Vice President of Hockey Operations, Al MacIsaac. Joel Quenneville, who coached the Blackhawks for eleven years, including in 2010, has also resigned from his role as head coach with the Florida Panthers. However, both Kevin Cheveldayoff and Marc Bergevin retain their roles as GM for their respective teams. Further to these developments, the NHL fined the Blackhawks organization $2 million for negligence.

Name Removal from the Cup

Finally, also in the fallout of the Chicago sex abuse scandal, the Hockey Hall of Fame has removed the offender’s name from the Stanley Cup — you already know his name.

While society has transitioned into a new era of inclusivity, the NHL clearly ignored the memo. That was made even more evident during a press conference last Monday on November 1st. Gary Bettman took questions from the media to address the Chicago scandal and hockey culture as a whole.

Throughout the press conference, Bettman demonstrated his law degree with tone-deaf answers. In the span of an hour, the commissioner did the following:

I’m hearing this morning that several NHL owners are “very concerned and unhappy” with Gary Bettman’s leadership. I think even the owners realize it’s time for a change in the NHL and culture only changes from the top down. It is time to FIRE BETTMAN. 1/

From the way Gary has mismanaged the horrific events in Chicago to his refusing to acknowledge a link between traumatic brain injury and CTE, for doing nothing to help retired players, for calling the NHL a “family”, for the Dept of Player Suspensions, 2/

For the way the game is marketed, for the lack of any coherent global strategy, for turning his back on issues like painkiller, ambien and toradol abuse, for his lack of empathy and caring, for his 3 lockouts and all the lies. It’s time for Gary to go.

To add more validity for where the NHL currently stands business wise, Westhead tweeted this not long ago, which was also mentioned on The Pucknologists earlier this week:

Donald Fehr’s Leadership for the NHLPA in question

On November 3rd, following a Toronto Maple Leafs practice, Wayne Simmonds expressed his own support for Kyle Beach and lent his thoughts on how hockey culture and the culture of winning has led to a culture of silence:

Wayne Simmonds speaks up in support of @RobinLehner and says this “can’t be just another fleeting moment.” pic.twitter.com/y6apZ92YeQ

Furthermore, he admitted that he now has doubts about the NHLPA doing the right thing:

Wayne Simmonds, asked if his faith has been shaken in the @nhlpa by the Kyle Beach situation: “Quite frankly, yeah, it has.”

More players have since shared that sentiment, according to an episode of the DFO Rundown podcast from Daily Faceoff which user @akaRCN tweeted.

With these very honest comments and observations, perhaps it’s time for Donald Fehr to be fired (and not merely step aside) as President of the NHLPA.

Hockey Must Do Better

For the last couple of years, we’ve been hearing the term “hockey culture” a lot, from concussions to more abhorrent incidents such as the sex abuse scandal and racial slurs being hurled. With social media being more prevalent than ever, I’ve been seeing more horror stories about similar types of “rituals” or what have you taking place. This sport, at its core, is still stuck in the past. Change must happen all the way down to the grassroots level if we are to truly usher in a new era of hockey and welcome the future generation of hockey fans and players alike.

For the Blackhawks and the NHL, it’s not a good look when two of the league’s superstars defend an outgoing GM as a friend when that same figure let the abuse linger for one of their former teammates. As a team, I would think you would want your captain to be more supportive of the victim than voice their support for Bowman.

I’m sorry nobody spoke up for you back then, Kyle.
But we’re speaking up for you now. pic.twitter.com/owN5PRaEj6

It’s worth noting that both players have since walked back their comments, realizing the insensitive nature of such comments. However, it’s still unacceptable behavior from the leadership group.

Bettman has shown again and again that he’s incapable of truly growing this sport. You can say that he’s overseen numerous expansions, most recently Vegas and Seattle. You can point out the amount of outdoor games he’s greenlit or that he’s tried to help expand the NHL into Europe and China.

However, with the good comes a lot of the bad that Walsh tweeted out. As fellow colleague Hockey Jerk also mentioned on the aforementioned episode of The Pucknologists, the handling of this scandal alone if handled poorly will have undone any good will Bettman might have had for the game. In my opinion, it already has.

Having said that, the NHL team owners must also consider their position in one of the most contentious times in league history. How much of their displeasure is based on Gary Bettman hurting their bottom line? How much of it is based on morality?

As I mentioned earlier, Fehr himself is also finding his job security at risk. The man has found himself backed into a corner as players seek answers as to how the NHLPA botched these allegations and turned their backs on their own players, such as in Kyle Beach’s case. It’s unacceptable.

In my opinion, hockey is at a crossroads. The sooner the higher-ups realize that fostering a healthier environment for their players is much more important than winning, the better off this sport will be for the future.