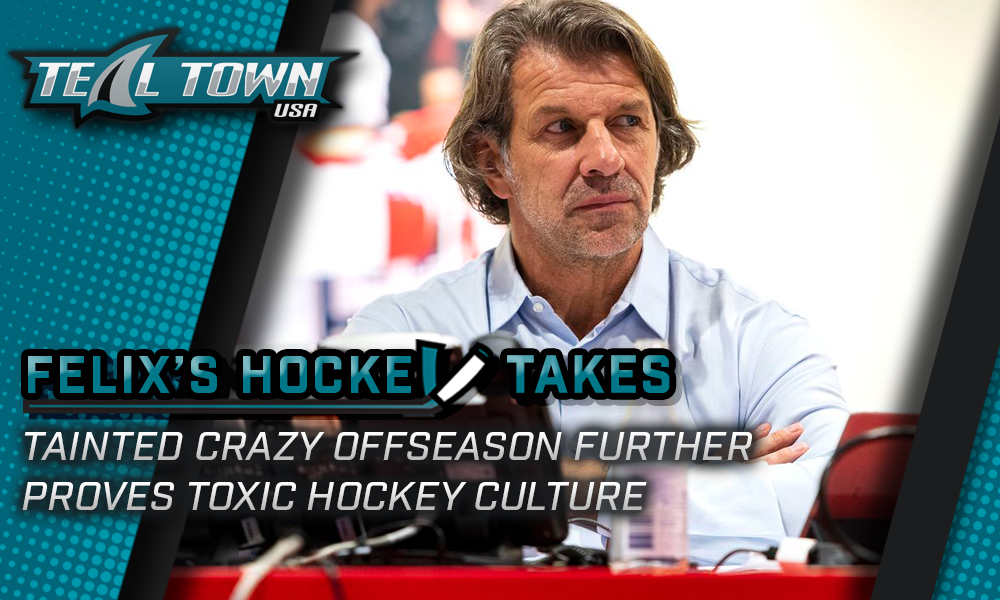 With the Seattle Kraken officially coming in and establishing itself as the NHL’s 32nd franchise, we all knew there were bound to be a flurry of moves from various teams around the league, as front offices scrambled to put together lists of players they wanted to protect and players whom they were willing to expose to Seattle Francis. We saw the picks, and we saw the leaks from Daily Faceoff’s Frank Seravalli, whom a lot of fans were unfairly upset at for spoiling this year’s Expansion Draft.

However, this article isn’t about any of that. This isn’t about who got better and who got worse, talent wise, in one of the most active offseasons in recent memory. Underneath the pile of all the player movement and transactions lies an even bigger story that must be told. A story the league has tried to sweep under the rug time and time again: the toxic hockey culture that still exists in this league.

Two days prior to the start of the 2021 Stanley Cup Playoffs in mid-May, TSN’s Rick Westhead published an article about a lawsuit filed by a former unnamed Chicago Blackhawks player who was sexually abused by former video coach Brad Aldrich during the team’s 2010 Stanley Cup run. The lawsuit essentially alleges that Aldrich committed disturbing acts of unconsented sexual behavior that I will not detail here. Furthermore, the player — who has referred to himself as “John Doe” in court documents — sought counseling from the team’s mental skills coach, James F. Gary, who had not only informed him that Aldrich had also assaulted a teammate of his prior to this incident, but also convinced the former player “that the sexual assault was his fault”.

The case against the Blackhawks organization became even more damning in another lawsuit filed early last month in June, this time by a former high school hockey player. Is alleges the front office gave Aldrich a positive reference letter in 2013, following his stint with the Blackhawks, as Aldrich looked elsewhere for work. The lawsuit also named Aldrich in this particular sex abuse case.

As if the situation couldn’t get any worse for everyone involved, Chicago’s senior management allegedly refused to file a police report when asked to by the then-skills coach Paul Vincent during a May 2010 meeting.

Over the months of the postseason and the offseason, the mountain of evidence has piled up against the Chicago Blackhawks organization alleging not just a culture of sexual and racial abuse, but also a “don’t tell” mentality that has festered within closed doors. You may recall that back in 2019, former NHLer Akim Aliu accused former NHL coach Bill Peters of hurling racial epithets at the then-20-year-old when Aliu played for the Rockford IceHogs, Chicago’s AHL affiliate.

It’s always been a privilege, not a right, to be drafted into the NHL. You don’t get to this stage of your young professional hockey career without having a ton of skill and, generally, having good morals. That should always be the case.

Unfortunately, all the feel-good moments on the first day of the NHL Draft were overshadowed when Montreal Canadiens GM Marc Bergevin inexplicably selected Logan Mailloux. Mailloux was convicted and fined in Sweden last December for taking a picture of a woman performing a sexual act without her consent, and distributing the photo to his teammates on SnapChat. The woman had reported the incident to police, who had then charged Mailloux for invasion of privacy and defamation. Further to this, Mailloux had apologized. However, the woman did not feel it was sincere enough.

It is also very important to note that Logan Mailloux had “renounced” himself from the NHL Draft as soon as the news broke of his crime and conviction. However, technically, no prospect can really renounce themselves from the draft, as noted by Elliotte Friedman on-air on ESPN2.

Now, Bergevin being the one who made this pick is significantly important. For those who are unaware, Bergevin was the Director of Player Personnel for the Chicago Blackhawks during their 2010 Stanley Cup run. He was also named among those potentially involved in that organization’s sex scandal that I had detailed above, though he claims he was “unaware” of the incident.

Outcry Against the Canadiens, Molson Apology

Over the next couple days, while fans were understandably very upset with the front office’s choice of draft pick selection (some even reconsidering their fandom), some sponsors had even threatened to drop their support of the team, including a popular Canadian chain restaurant, St-Hubert. Some high-profile politicians have also criticized the pick, such as Canadian Prime Minister Justin Trudeau. I should also note that at the time of writing this, St-Hubert has decided to continue to sponsor the Habs despite the scandal, following team owner Geoff Molson’s apology.

In today’s hyper politicized world, every wrong move puts you under the microscope. When the New York Rangers bought out Tony DeAngelo for his poor on-ice play and his even worse off-ice attitude months after a heated post-game fight with goalie Alexandar Georgiev and K’Andre Miller back in January of this year, it was for good reason. The man has a history of poor treatment towards Miller, and is known for his questionable and outspoken opinions on Twitter, especially about the ongoing coronavirus pandemic (COVID-19).

Then, rumors began swirling fast that the Carolina Hurricanes were interested in signing DeAngelo, which was completely unexpected. The fact that the Carolina Hurricanes actually decided to give DeAngelo a second chance is a major head scratcher, especially for an organization that has consistently prided itself in being an ally for the LGBT community, and thinking outside the box with its well-known post-game Storm Surge celebrations following a win at PNC Arena. The DeAngelo signing for Carolina prompted angry and disappointed tweets from not only Canes fans, but also hockey fans who’d been cheering on the organization and praising them for their good morals and inclusivity.

Recently the Athletic’s Sara Civian, who covers the Canes, wrote a very good article detailing just what the TDA signing meant for the organization’s reputation. Quite frankly, this signing is a slap in the face to those who believed that this organization could do any good, and again, it starts at the front office. I honestly felt horrible for their social media team, who are a part of the organization who believed that they could continue to build the brand for the better. Now, as Civian mentioned in her article, their jobs — as well as everyone else’s in similar brand-building roles — just got “significantly harder”.

I’ve touched on this topic before in my Head Trauma series about hockey’s connection to CTE a few years back, on how concussions can have a major effect on a player’s mind, body, and emotions. It’s no different from the rest of hockey culture; a culture of hazing, of harassment, and pretending like it never happened.

I remember former NHL Daniel Carcillo being very vocal on social media and speaking out against the toxicities in the game, and how he wanted the system to change. As controversial as his opinions are on that, he’s right. Earlier I referenced Akim Aliu’s negative experience in the Chicago organization, and you compound that with these new allegations of sexual abuse.

This isn’t just a Chicago problem. Everything I’ve laid out here is a huge problem not just in the NHL, but in professional sports in general. As a league that’s continued to try to grow the game, this offseason has been an incredibly bad look for the NHL, as much as it is for those individual organizations named. We always see news posted on our Twitter feeds that the league has hired some person to represent the fans and make themselves look inclusive. At this point, all of that is lip service. It really is.

I’ll admit that for the longest time previously, I didn’t want to believe it. I thought that the hashtag #HockeyIsForEveryone is a good thing. I thought the league embracing these communities is a good thing. And the infuriating part of it all is that it is a good thing! But the problem comes when you have management making ill-advised decisions, and as a league, you allow these decisions to happen time and time again and participate in burying the root cause of the issue(s) at hand. And I know that sports is a business, too, and in the end, all the owners care about are the countless zeros in the bank accounts.

What’s happened this offseason is bad for business

It’s bad for when you’re trying to appeal to female hockey fans as well, and those who’ve been through similar situations that these former players in the Chicago scandal went through. What does that tell you when your favorite team drafts an abuser, or when your favorite team signs someone whose opinions align with those that are actually harmful to the general public, especially to those who are vulnerable to the perils of COVID? What does that tell you when front offices constantly go through PR nightmares when they make these poor decisions, or when they refuse to address a dark, disturbing “open secret” that’s now come to the forefront? Bear in mind that this affects generations of hockey fans and aspiring hockey players to come as well. What does that tell us when the deafening silence from organizations tell us that they are okay with all of these things that happened, or are happening?

The sad truth is that this kind of decision-making will not change unless the culture changes, until the Old Boys’ Club no longer exists. We will continue to see teams make such controversial decisions, and more lawsuits will inevitably be filed in the future.

While I’m not typically one to talk “politics” for Teal Town USA or in general, this is more than that. This is a reminder that there’s more to sports than just cheering on our favorite teams. We love watching our favorite players do what they love, and watching the talent level consistently rise in this league. But there comes a time when hard topics must be discussed, because quite honestly, if not now, then when?

Yes, I believe people deserve second chances, but only if they’ve shown they’re really willing to and going to change. The problem is first impressions are everything, and when a person has screwed up their reputations in someone’s eyes, generally that’s it for them. There’s a big trust factor here, and most people aren’t willing to change for anyone, despite what they say.

For example, if Logan Mailloux actually proves in the years to come that he’s changed from that incident, then maybe some fans will hesitantly come back around to him. If not, Montreal’s pick will look even worse, and possibly even tarnish their century-old legacy.

These are the issues that the NHL and all the now-32 organizations need to take a hard look at and take very, very seriously. We’re at a time now where staff and personnel need to decide if they’re morally fit for the roles that they’re in, and for management around the league to look themselves in the mirror and think “am I fit for this job? Am I capable of really addressing any moral internal issues that this team might have, or is it best that I step down and hand the responsibilities to someone more capable?”

This is a wake-up call for the league in an era of wake-up calls, and if the league truly wants to see itself moving forward with society, change must happen now.