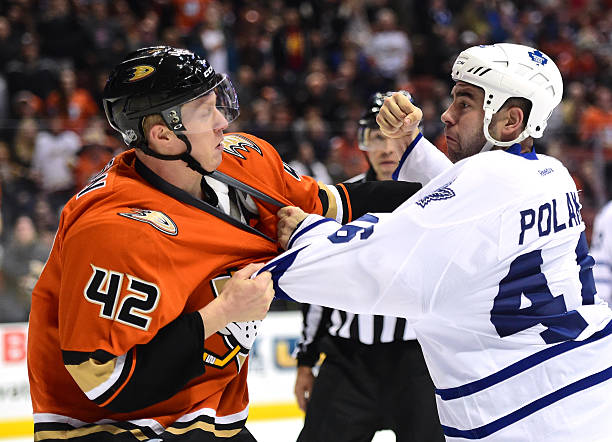 Overpayment by the Sharks or bar set high?

Overpayment by the Sharks or bar set high?

As has been the case several times before, San Jose Sharks general manager Doug Wilson has decided to get the jump on everyone during trade season. In an early-morning deal Monday, Team Teal welcomed defensive defenseman Roman Polák and multi-purpose forward Nick Spaling from the Toronto Maple Leafs in exchange for second-round draft picks in 2017 and 2018, as well as the contract rights to Raffi Torres.

In traditional fashion, the trade was met with hesitant elation from Sharks fans when hearing of the acquisition before ultimately groaning at finding out what was given in return.

Is this trade really as bad as it looks on paper? It potentially could be. Let’s look at what it does for the Sharks before getting into how it harms them.

It is of little question that the Sharks needed to add an experienced defenseman. Some would even argue that they needed two. In the first half of last season, Polák was viewed by Toronto media and fans as the only player holding things together for a horrendous Maple Leafs team. Yet, while his statistics have been far superior this season, compared to last, he has been viewed as a struggling defenseman that “had to go.” The Sharks will be able to freely plug Polák in whatever defensive role that they please, should the team suffer a future injury to the corps. The team is just 1-6-1 when playing without a “top-four” defenseman this season.

While Dylan DeMelo has proven himself to be capable of playing National Hockey League minutes on the back line, so far, the Sharks now have a more-trialed group than they did with DeMelo and the nearly-forgotten Matt Tennyson.

Spaling could be the big surprise in the trade. He has built a reputation in the league for being a quality penalty-killer, a tenacious forechecker who is strong in the corners, and is proficient in the faceoff circle. He can play all three forward positions, though is best-suited at center or right wing. Spaling also put up 59 points over the last two seasons before dipping to just seven points in 35 games with the Leafs. He is a significant upgrade over the rugged Mike Brown and perhaps even over Tommy Wingels, who is out with an injury and has struggled most of the season.

Meanwhile, the remainder of controversial left wing Raffi Torres’ $2.125 million salary was wiped from the payroll, while still keeping him in San Jose — with the Barracuda. Torres had a modified no-trade clause and one would assume that he was consulted after clearing waivers back on January 30 about the idea of being traded while still remaining in the city. Torres has settled in San Jose over the past three years and knows that ‘Winter is Coming’ on his hockey career, based on his reputation and injury woes.

The Maple Leafs will now pay Torres to not play in their organization — though Torres has only played 6 of 15 games for the Barracuda, themselves. It would be quite the story if the Barracuda and Torres could go on a Cinderella playoff run to meet the Toronto Marlies, who have decidedly been the best team in the American Hockey League this season, in the Calder Cup Finals.

Like the Martin Jones acquisition last summer, this trade is dependent on the Sharks making the playoffs for years to come. If there’s one thing we know about Wilson’s trade history, it’s that he’s an optimist. When he makes a deal, he does it with the intention of receiving the maximum result. That’s not a bad quality to have as a general manager — you always want to be the “winner.” However, it seems that it comes at the price of reason, at times.

Moving quality draft choices seems like a tremendous cost for two players who are expected to provide nothing more than depth and, hopefully, stability. This, especially for a team who claims are trying to build from within and now has fewer assets to do just that. Would Ben Smith not have been able to fill the same role as Spaling on the third or fourth line? Despite being speculated as being in head coach Peter DeBoer’s doghouse, Smith has played extremely well with the Barracuda since his re-assignment. It seemed reasonable to assume he would be a perfect fit to replace Wingels in the short-term. Compounded with dumping Torres’ salary, was Spaling worth adding an additional second-round pick to the deal?

Polák and Spaling are both unrestricted free agents after this season. It has already been speculated upon earlier this season that Polák could be a prime target to return to the St. Louis Blues, whom he spent parts of his first eight seasons with, in the offseason.

Ultimately, this trade will come down to whatever the Sharks’ next move is. If the Sharks do not win the Stanley Cup this June or lose Polák and Spaling to free agency this summer, it will be a hard pill to swallow in 2018 when we find out that the Sharks are still paying for players that did not work out two years prior.

Fans have heard this story before.

Wilson’s 2009 trade of prospects Nick Bonino and Timo Pielmeier to acquire Travis Moen and Kent Huskins from the Anaheim Ducks is widely viewed as one of the worst in team history. Bonino was regarded as one of the top NCAA hockey players and won a national championship for Boston University just a month later. The Sharks lost in the first round of the playoffs to the team they had traded with, Anaheim. Moen left the team that summer and Huskins did not play a single game (though was later re-signed).

(Ironically, the Pittsburgh Penguins acquired Bonino last July as a replacement/upgrade for — you guessed it — Nick Spaling.)

With trade season now fully underway, Sharks fans have now been forced to hope for the best. Wilson obviously felt that not only was the reward worth the risk, but that by setting the bar high with the overpayment for possible playoff rentals, rival teams who covet defensemen (i.e. Los Angeles Kings, Chicago Blackhawks, St. Louis Blues) will overpay even greater amounts than the Sharks did. It is a dangerous sacrifice by Wilson, with the underlying idea of that, “If we do have to go down, we’re going to bring as many other teams down with us!”

People sometimes forget, when they banter about trades, that only one team wins the Stanley Cup each year. General managers are ripped on regularly for “not doing enough” to improve their teams, simply because they did not win the ultimate prize.

If the Sharks do not find themselves raising the giant silver chalice at the end of the season, they will be one of 29 teams that did not. However, if Wilson cannot find a way to bring Polák and Spaling back for future seasons, this is the type of move that makes the taste in a fan’s mouth go incredibly sour. Only one of a few teams would take that risk.

One way or another, the hockey world will not have to wait long to find out whether this was a worthwhile trade or a miscalculated dud.