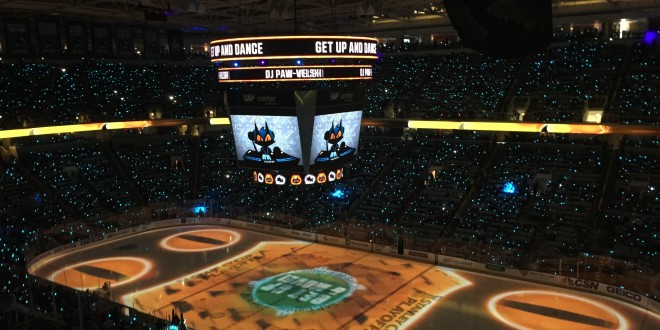 My 25th Season With The San Jose Sharks

My 25th Season With The San Jose Sharks

I wanted to take a couple days and reflect on the historical run to the cup that we all witnessed a by the San Jose Sharks in their 25th season before I wrote about it. Even though the nerve endings are still a bit raw from the Final, overall it was an especially magical season for yours truly that began back in August 2015 and I wanted to share some of the highlights with you.

Prior to the start of the silver anniversary run, the Sharks sent out a notice that they were replacing Gary Glitter‘s “Rock N Roll pt. 2” as their goal celebration song. They already had 5 songs they were considering, but on the submission form to choose your favorite, that had an option to submit something you thought might be better than their choices. I thought “Let’s Go” by Sixx: A.M. would be a great choice and, unbelievably, it ended up being the song they chose. I didn’t find out my song had been selected until the first preseason game against Vancouver. While I was ecstatic to have the submission they picked, unfortunately the song wouldn’t last the entire season, eventually being replaced with the first song they used to come out of the Sharks head to, 2Unlimited‘s “Get Ready For This”.

Got To Be There

A few days after the goal song message went out, the Sharks put the word out on Twitter that they were looking for fans to include in a marketing campaign for the 25th season known as “Got To Be There”. I submitted a video and was lucky enough to be included in the first commercial they ran. It was a very cool experience and they even gave me a puck autographed by Brent Burns for my time. The commercial was featured heavily in the first few months of the season both on CSN broadcasts and on the jumbotron during Sharks games.

A few weeks later in early September, the Sharks held their annual Fan Fest. This time around, it was a little different as they had an adults-only area outside that included the usual rally staples like the Sharks fire truck and jumbo Sharks Territory signs, but also featured beer tasting tents. Sometimes, kids can be a bit star struck and overzealous when it comes to meeting their favorite players so this adult-only option was a fantastic choice I hope they continue with in the future.

The best part about the beer tents was that some of the Sharks were actually doing the pouring. I got to have a beer drawn by both Brent Burns and Matt Nieto as well as get pics with Alex Stalock and Paul Martin. All of the players involved were extremely cool and had no problems talking with fans, signing autographs, and posing for pics, with the exception of Alex Stalock who had a very funny encounter with a very zealous fan.

After going to the very first San Jose Barracuda game the night before, I was jacked up for opening night against the Anaheim Ducks. Over the years, I’ve spent a few bucks on mystery pucks while rarely getting a player I really wanted or didn’t already have. It felt like there might be something special happening this season as I scored with pucks signed by Joe Pavelski, Tomas Hertl, and Marc Edouard Vlasic. The evening began with the awesome on-ice projection and the tribute banner to George Gund III was unveiled.

After starting the season in LA with a 5-1 blowout against the Kings, the Sharks would open their 25th season at home with a 2-0 shutout against the hated Ducks.

Although I had always wanted to, I never got the opportunity to take part in the annual Bowling with the Sharks event until this season. It was a fantastic experience that I plan to do every year from now on.

My team was captained by one of my all time favorite players, Owen Nolan and we faced off against a squad captained by Mike Brown. Halfway through the event, the Sharks players shift over a lane so during the second half of the evening, we were captained by Melker Karlsson. The saddest part of the evening however was seeing Logan Couture nursing his leg injury, but he still took pictures with anyone who asked. I also got a great video for Instagram of SJ Sharkie guttering on his first attempt.

When David Bowie passed away in early January, Jamie Baker did a small tribute by inserting some of Bowie’s song titles into his call for that evening’s game in Winnipeg versus the Jets. Prior to the game, Jamie tweeted that whoever sent him the most titles he used during the game once it was over, they would win a pair of tickets to the following game against Edmonton.

During the Winnipeg game, I noted every Bowie song reference I heard, from Golden Years to Let’s Dance. Once the game ended, I tweeted my list to Baker and he got back to me about 20 minutes later to let me know that I had won. I assumed he would only need my name and he would leave the tickets at will-call. However, Baker took it a step further and let me know if I could be at the Tank by 6:00pm, he would give me a tour. Of course, I took Jamie up on his generous offer and got to see the players warming up with their soccer ball in the halls along with a tour of the production truck and the area in the rafters where Randy Hahn and Dan Rusanowsky work their magic.

An unexpected surprise during the tour would be running into Drew Remenda in the stairwell as he was in town to call the game for Edmonton. This was a definite highlight to the season.

Around the middle of the season, a promotional tie-in with Pepsi was announced. As part of the promotion, fans were asked to send in pictures holding one of the 3 Pepsi cans that featured former Sharks alumni Evgeni Nabokov, Mike Ricci, or Owen Nolan.

After scouring a couple Target stores and a Safeway, I was able to track down all 3 cans. As luck would have it, the cans happened to match the Sharks jerseys I have for each player so I took a picture with each jersey and corresponding Pepsi can and submitted the pic to the right.

In The Penalty Box

At the end of March, I found out I was selected as a winner in the Pepsi contest. While I was told some winners would be watching the game in the alumni suite or bumping fists with the Sharks as they came out of the dressing room, the prize I won was getting to sit in the penalty box for the pregame warm-up skate.

It was an incredible experience that I will never forget and to top it all off, I got both Joe Thornton and Brent Burns to flip pucks over the glass to us during the warm-up. The morning after the game, I went to the Sharks practice and was able to get Burns to sign the puck he flipped me. Needless to say, it was an amazing, Sharks-filled 24 hours.

The regular season of the San Jose Sharks 25th Anniversary season ended on April 9th, 2016 versus the Arizona Coyotes. We had awesome seats near the where the opposing team skates out to the ice and I started the evening by nabbing mystery pucks from Chris Tierney and Joonas Donskoi.

Before the game started, we were also able to check out the “have a beer with Owen Nolan” event where Owen seemed to be disappointed that everyone but him was able to drink. Just kidding.

The Sharks ended the season the way they started it… with another shutout pitched by Martin Jones. And if that wasn’t enough, I caught one of the shirts being launched by the Tank patrol.

The Sharks had their best ever playoff run and it was amazing to see. While they ultimately came up just short of Lord Stanley’s Chalice, it was their best playoff run in franchise history and it was incredible to see live. A couple of the playoff highlights for me included:

The San Jose Sharks really brought it this season when it came to giveaways and promotions. Between wine glasses, beer steins, drink coasters, mini lockers, anniversary posters, and more, there was always something to take home from a Sharks game this year. All the goodies they’ve given to fans during this postseason with the #TurnUpInTeal street team has also been incredible.  I hope it’s a trend they continue into the future and that future seasons can be as memorable for everyone as the 2015-2016 season was for me. However, a Sharks win was always the best thing to take home after a game, no matter what.

Of course, this season wouldn’t be near as unforgettable if not for all the friends who celebrated with me after wins and drank with me after losses. A huge thanks to Rocket, Megan, Mandy, Brad, Brett, Austin, Jake, Archie, Barclay, Jerk and John for making this season the best and Sharkiest ever.