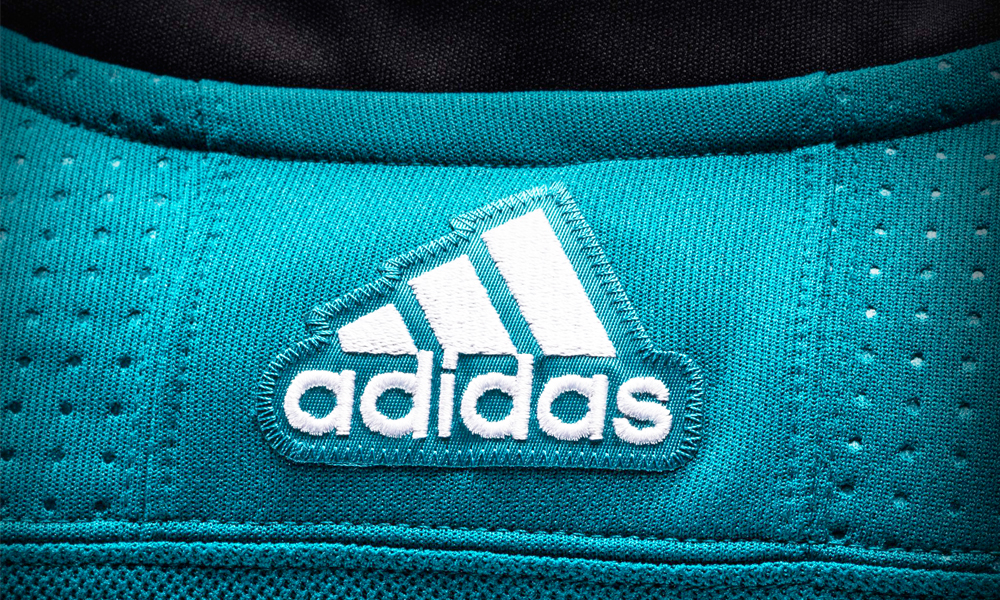 The day after the Pittsburgh Penguins won the Stanley Cup, we were given teaser pics of what the National Hockey League and it’s new apparel partner, Adidas have been working on.

On Monday, June 12th, the San Jose Sharks tweeted this pic out:

Not much to go on, but you see some slight changes.  The jersey will implement the Adizero technology as seen from the World Cup of Hockey in September of 2016.  This blends three lightweight, resilient fabrics to keep the players cool and comfortable while providing added flexibility and improving overall movement.  After all, when “The Next Wave” jerseys were unveiled in August of 2013, the Sharks have always emphasized a lightweight jersey.

This morning, the Sharks posted another teaser (as did a majority of the teams in the NHL) on Twitter:

First thing to note, the new collar.  On the Next Wave jersey, the collar was Deep Pacific Teal.  Here it is black.  Hard to see on the above pic, but, when enhanced, it is a black collar.  Pending the front of the collar, it might be the first completely black collar in team history.  Don’t bank on it.

Wait wait, is that a lighter teal?  Similar to the original Pacific Teal used by the Sharks from 1991-1998?  Doesn’t look like it.  On many of the teaser pics put out by Adidas and the NHL, the jerseys are lit a little lighter (perhaps to expand thoughts of speculation)  The teaser pic also showed that the player’s font will not change, however, they way it’s made might be.

In the past, the lettering has been multiple layers of tackle twill sewn on top of each other and onto the jersey.  As we’ve seen with the Next Wave jerseys, extra layers were removed to reduce the weight of the jersey.  Perhaps that’s been unveiled already?  If you look closely at the New York Rangers’ preview,

Tackle twill with breathable material inside.  This is known as a reverse kiss cut.  This type of customization is becoming more and more common. With reverse kiss cut customization, the outer layer is actually cut out to a very thin layer and then placed on top of the layer underneath.  Again, all in to reduce the weight of the jersey and enhance flow and movement.

We’ve seen this on the World Cup jerseys as well.

It should be known that it looks like the lettering is used from replica jerseys from last year to show the single layer application.  Which, most likely will be what the public will have when the Fanatics replica jerseys come out likely September.

Per yesterday’s teaser video, and screen captured by our good friend Chris Creamer at SportsLogos.net, the NHL logo will be “Chormoflex” styled patch, similar to what we have seen on MLB and NFL jerseys for special events.

Speculation and likely teasers will continue.  Nonetheless, the jerseys will be officially unveiled on Tuesday, June 20th.  And we’ll be here to speculate as we get more information here.