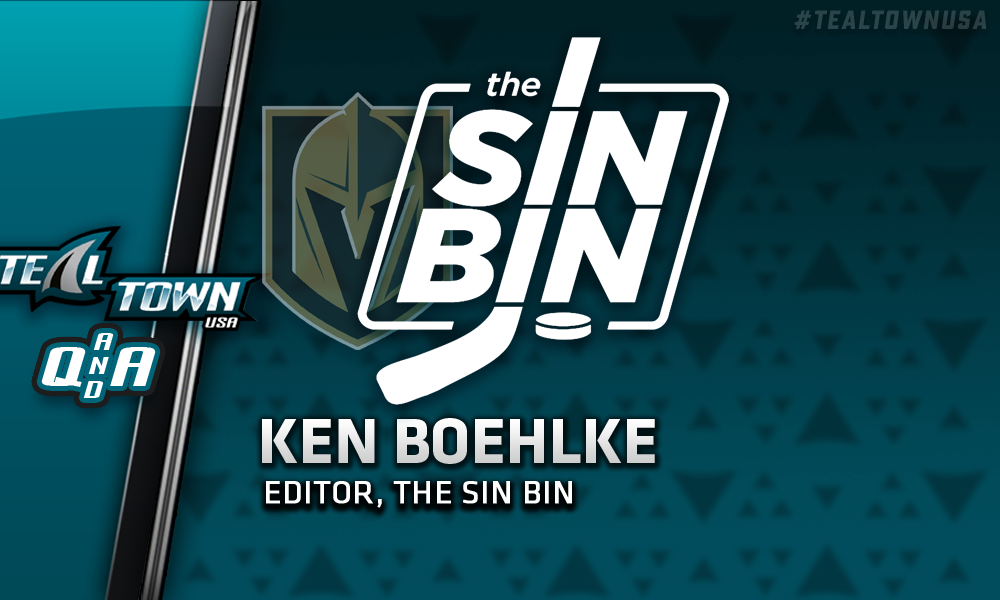 It’s the start of a new year in 2018. Hopefully everyone had a great Christmas and New Year holiday, and speaking of the new things, how about the Vegas Golden Knights? The NHL’s newest expansion team has had an unbelievable inaugural season thus far, blanking the Nashville Predators on Tuesday night, with eight wins out of their last ten. They currently lead the Pacific Division with 56 points, and trail behind only the league-leading Tampa Bay Lightning by four points. How have the Golden Knights been this good? What’s been the recipe to their success? Recently I chatted with Ken Boehlke, editor of The Sin Bin and tweeter for the SinBin.vegas Twitter account, via email to answer these questions as well as sound off on any improvements he thinks Vegas should make heading into the second half of the season.

Here’s the Q&A session below:

FC: As of now, the Vegas Golden Knights are first in the Pacific Division, and second in the League to the Tampa Bay Lightning. Obviously, not a lot of people thought the Golden Knights would have the kind of season they’re currently having. What’s been the key or keys to their success so far?

KB: The main reason they’ve been having so much success to this point has been their balance. Coaches use the term “roll four lines” all the time and then you look at TOI numbers and shake your head wondering what world they are living in, but with the Golden Knights they really do it. All four lines play important minutes and they are as spread out as can be and the same goes for the three D pairings. It’s not just balance of minutes though, it’s also balance of talent across those lines. I like to say the Golden Knights have two good 2nd lines and two good 3rd lines. So, on most nights, they have at least two better lines than their opponent and on many nights they even have three. Couple that with Gerard Gallant‘s willingness to let his 4th line take minutes away from the opposing team’s top line, and you’ve got a team that doesn’t seem good, but really is.

FC: Jonathan Marchessault has been one of the key contributors to the team this season with a team-leading 34 points. Of course, this is a guy who went undrafted, began his NHL career in 2012 with the Columbus Blue Jackets before heading out to Florida (two seasons with the Tampa Bay Lightning and one with the Florida Panthers) before being selected by Vegas at the expansion draft.

William Karlsson and James Neal also fall into that category of key offensive contributions, both tied for the team-lead with 17 goals on the season. What does that tell you about the offensive potential of this team, as well as how GM George McPhee was able to put all the pieces together for what obviously has been a League-historic inaugural season for the Golden Knights?

KB: Before the season began it was a big question where the scoring was going to come from. We expected James Neal and David Perron would be able to score, but the rest were question marks. Well, they are the second highest scoring team in the Western Conference and seem to be getting them from all over the place. The biggest reason for this is their incredibly strong transition game. When teams turn the puck over to Vegas, they get going in the other direction in a hurry and if they create odd-man rushes, which they do often, they usually cash in. It’s a combination of quick decision making, fast skaters, and puck moving defensemen. No one does anything special, but they take advantage of the opportunities they get when they get them.

FC: Switching gears to more of the fandom side of hockey, what’s the atmosphere been like at the T-Mobile Arena thus far this season and how has the arrival of the Golden Knights helped promote the growth of hockey in the Sin City?

KB: It’s been absolutely electric in that building every single night. I was skeptical about the number of away fans that were going to be in the building and how it would effect the home-ice for the Golden Knights, but boy I could not have been more wrong. The more away fans that have made their way to T-Mobile Arena, the better the atmosphere has been. There’s an energy that competing fans bring that simply cannot be matched. Plus, the Golden Knights game-day production crew do an incredible job of always making it feel like it’s a big game. It truly does feel like a playoff game in that building every night, I can’t wait to see what it’ll look like when they actually play playoff games.

FC: We know about the tragic shooting that happened in Vegas. What was the feeling that you got from watching the home opener that paid tribute to the victims, first responders, as well as the survivors? What was the overall emotion like, for fans and players alike? How was the team able to feed off that?

KB: The home opener was unlike anything I’ve ever seen at a sporting event. The Golden Knights deserve a ton of credit for putting together something as powerful and impactful as it was in such a short time. The city needed something to grab on to in order to heal from the horrendous tragedy, and the Golden Knights were there to be that thing. I expected it to be a bit of a tough spot for Gallant and his team as the emotion of that ceremony was overwhelming. They came out on fire and turned what was a somber building into a raucous celebration. It really was a special night.

FC: With the team, the city and its fan base now seemingly settled together as a community, there’ve been rumors that Seattle might get an expansion team now that the NHL is focusing on them more. What are your thoughts on that, as well as on the growth of the game as sort of a recently converted hockey fan?

KB: I love the idea of Seattle getting a new team and continuing to expand the game of hockey on the West coast. Seattle has done incredibly well supporting their football and soccer teams and I think they’ll fall in love with hockey just like we have here in Vegas. Selfishly though, I’m hoping it takes a little while cause I’m quite enjoying Vegas’ time in the sun.

FC: Finally, we’ve talked about the positives of their historic run. What are some things you’d like to see the team improve on moving forward especially going into the playoff race?

KB: There are certainly some things they can sure up on the defensive end, especially when teams are able to gain the blue line and get all five skaters into the Vegas zone. They are very good positionally, but they tend to struggle to make the individual play to get the puck out. Instead, they wait for their goalies to make a save and then go the other way. The other issue they’ve had is dealing with teams that limit transition chances. A few teams have been able to really take care of the puck. Neither are major problems though. If Vegas can keep doing what they’ve been doing, we’re looking an expansion team who will finish the year with well over 100 points. Crazy.

I want to thank Ken for taking the time to answer those questions. Obviously, Vegas hockey has been a huge success in the Sin City. Very few people saw this coming, including me, but it’s great for the fans. It’s great for the city and the team.

If you want to read more about Vegas whether it’s news or recaps, head on over to The Sin Bin, or sinbin.vegas where Ken and his partner Jason Pothier post their articles. They also have a podcast if you’d like to check that out as well.