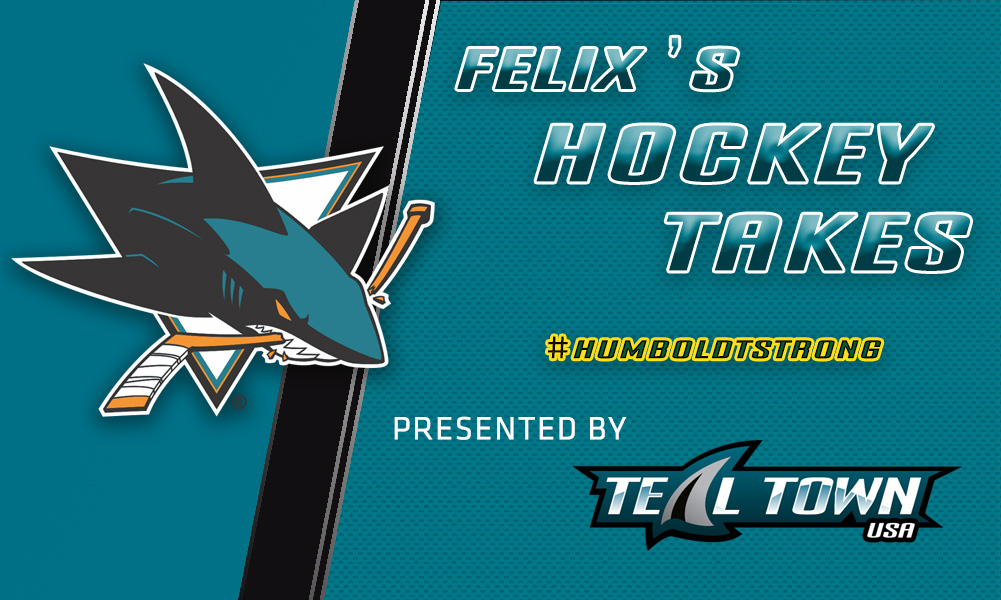 In this edition of Felix’s Hockey Takes

The NHL regular season has ended and 16 teams are in the Stanley Cup Playoffs starting today. That said, there’s been only one thing on my mind since last Friday night. Today I will be talking with a heavy heart about the deadly bus crash that took the lives of 15 of the Humboldt Broncos.

We Are All Broncos

It’s the nightmare of all parents, families, players, and coaches. The bus ride which has usually always been considered a safe haven for hockey players turns into a tragedy like this. The Humboldt Broncos team bus, which was carrying 28 passengers (plus the driver), was on its way to a playoff game when it was involved in a collision with a semi-trailer. 15 people were killed, 14 were injured. Identified among the dead were head coach/general manager Darcy Haugan, radio play-by-play Tyler Bieber, team captain Logan Schatz, Jaxon Joseph (son of former NHLer Chris Joseph), and Adam Herold — just to name a few.

I honestly have no words, really, to describe how I felt seeing it on the news other than shock. We’re talking about player personnel and staff members who loved the game just as much as us fans. It’s heartbreaking. At the same time, though, it’s beautiful seeing everyone in the hockey community come together for this. Hockey teams not just from the NHL but junior leagues as well gathered for pregame moments of silence. Immediately after the tragedy, a GoFundMe campaign that was launched to help the victims and their families raised a million dollars within the first couple hours. As of now, donations stand at $8 million, far surpassing the final goal of $4 million.

People from all over the hockey community are pledging to remember and support the @HumboldtBroncos and their families throughout the @NHL playoffs. Consider joining in. #HumboldtMotB https://t.co/6ZsrtKSHKK

Ian McLaren, who writes for The Score, put his own fun and charitable spin to go along with the GoFundMe.

The Broncos held a vigil remembering the 15 people killed. Whether or not the rest of the season continues remains uncertain.

Got this text from a friend who I went to high school with in Humboldt.

Inviting you to do the same as we remember and send our thoughts to the #HumboldtBroncos.#PrayersForHumboldt #Broncostrong #Humboldtstrong #theSJHL #TSNHockey pic.twitter.com/HHwZyUZ5KG

Recently, a new campaign took hold of social media as players, fans, coaches, and broadcasters all took time to place their sticks, headsets, and even pucks outside their homes in memory of the 15 people who were killed.

Buddy of mine moved away last year and asked if I needed an extra stick. Wrong curve for me but said it would probably come in handy at some point.

All the way from San Jose, CA 💚💛#PutYourSticksOut#HumboldtStrongpic.twitter.com/SOW0mrUdz7

If the Broncos are playing, Tyler Bieber will want to call the game.#SticksOutForHumboldtpic.twitter.com/nQWWRDGZti

To the community of Humboldt and all of those affected by this tragedy, we stand with you #HumboldtStrong#PutYourSticksOutpic.twitter.com/jo9q3flKiH

Hey everyone. Please spread the word. Wear your hockey jersey this Thursday April 12, 2018 in support of @HumboldtBroncos#PrayersForHumboldtpic.twitter.com/95svC0pr9F

Finally, this Thursday April 12th will be Jersey Day. I don’t know how many people will be wearing their hockey jerseys on that day, but I know I for sure will. If you’re up for it, that’s another great way to keep the victims in memory.

Our thoughts will always be with the Humboldt community, as they continue through this healing process.