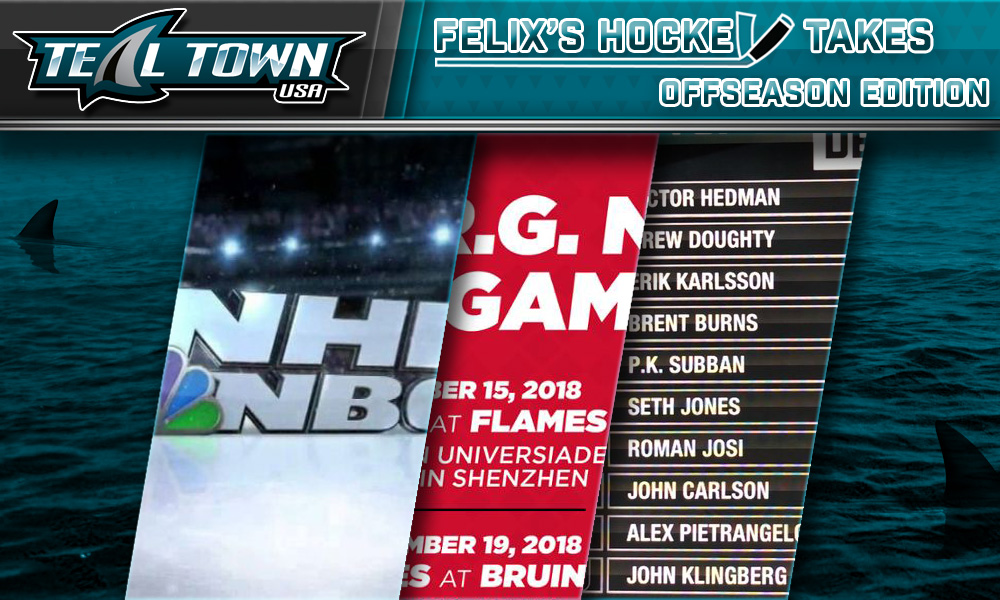 It is almost the dawn of a new season, with training camp a month away. It’s been a while since I’ve written anything hockey. I felt like I had to step away after the season was over, mainly because of things in my personal life, both busy, exciting and concerning. You know what though? Like hockey players and other athletes, I’ve had to battle through some demons. Still have to live life. That’s just the way it is.

That said, I was not planning to start my weekly-ish FHT articles this early. In fact, this likely will be a one-time thing considering we’re still two months away from the start of the regular season. However, something that was tweeted by the NHL Network Twitter account caught my eye, which I will discuss later in this official, yet unofficial 2018-19 FHT column. Without further ado, let’s take a look at a few other things that have made waves this week.

Today, the NHL Public Relations announced the 2018-19 preseason schedule, which starts on September 15 when Boston faces off against Calgary in China as part of two preseason games in China, the other happening on September 19. It’s part of the effort by the NHL to grow the game in Asia, especially with the Beijing Winter Olympics looming large in 2022. Last year, the Los Angeles Kings and Vancouver Canucks took part in the league’s first-ever preseason games in the Asian country for 2017 O. R. G. NHL China Games. There will also be nine neutral-site preseason games elsewhere throughout North America.

NBC Sports Network announced their revamped 2018-19 schedule, which is supposed to be much more diverse than in years past. NBC is scrapping their trademark “Wednesday Night Rivalry” nights for “Wednesday Night Hockey”. I mean, let’s face it. Half of their WNR match-ups weren’t even rivalries. It is nice, though, to see NBC show love to more than just Chicago, Pittsburgh, New York (the Broadway variety), and Boston, and … did I mention Chicago and Pittsburgh?

Per the San Jose Sharks’ Twitter account, team teal will be televised on NBC Sports Network eight times, including the home opener against the Anaheim Ducks on October 3. It will be their first meeting since the Sharks swept the Ducks in the first round of the 2018 postseason. San Jose will further get its chance to shine on NBC when the city hosts the 2019 NHL All Star Weekend.

Now, I get to talk about what I really wanted to talk about. For the past few days, the NHL Network crew have been putting together their lists for top 20 players in the league right now, broken down into different positions. The list that has everyone scratching their heads in Sharks Territory is the top 20 defensemen, with Tampa Bay’s Victor Hedman at #1. San Jose’s Brent Burns is listed at #4. However, I looked up and down the list and the first thing I noticed was … where’s Vlasic?

Take a look for yourselves.

Now granted, there’s still a lot of East Coast bias among the network hockey analysts. I get it. Games here on the West Coast don’t typically end until like one in the morning over on the East Coast. In fact, we’re lucky to have a guy like Burnzie on the list. He’s a prolific scorer whose scoring touch took a hit last season. He’s a hybrid defenseman, which means he can play both forward and defense, although his defensive game has been very suspect at times. Really, he’s more known for his offensive abilities.

Now, that said, Marc-Edouard Vlasic isn’t known for his goal scoring totals. He finished the 2017-18 campaign with only 11 goals. He did rack up 21 assists, however. His defensive game really does speak for itself, as noted below by our very own Drew Weber.

If I had to pick one player in the world to shut down Connor McDavid, or Sidney Crosby, or Brad Marchand it would be Marc-Edouard Vlasic. That’s all I’m saying.

Oh, and he’s got the hardware too.

Why is everyone getting on NHL Network for not naming Vlasic to the top 20? It’s not like Vlasic has an olympic gold medal or World Cup or World Championship medals.

The man his teammates and fans call “Pickles” is the catalyst of this San Jose Sharks team defensively. He and his partner Justin Braun have long been considered team teal’s top defensive pairing in the league, and like our friend Drew mentioned these guys are out there with one main job: to shut down the best offensive players in the league. Vlasic’s been doing so since the ‘06-’07 season, and has been called on numerous times to play for Team Canada for the World Cup, World Championship, and the Olympics.

For the NHL Tonight crew overall to not include him in their top 20 list is asinine. At least Ken Daneyko was knowledgeable enough to include him in his top 20 list. No matter what though, us Vlasic supporters in Sharks Territory and elsewhere know he’s a stellar defenseman. Hopefully it’ll just be a matter of time before others start to recognize the same.

Check out our YouTube for Teal Town Interviews and more!