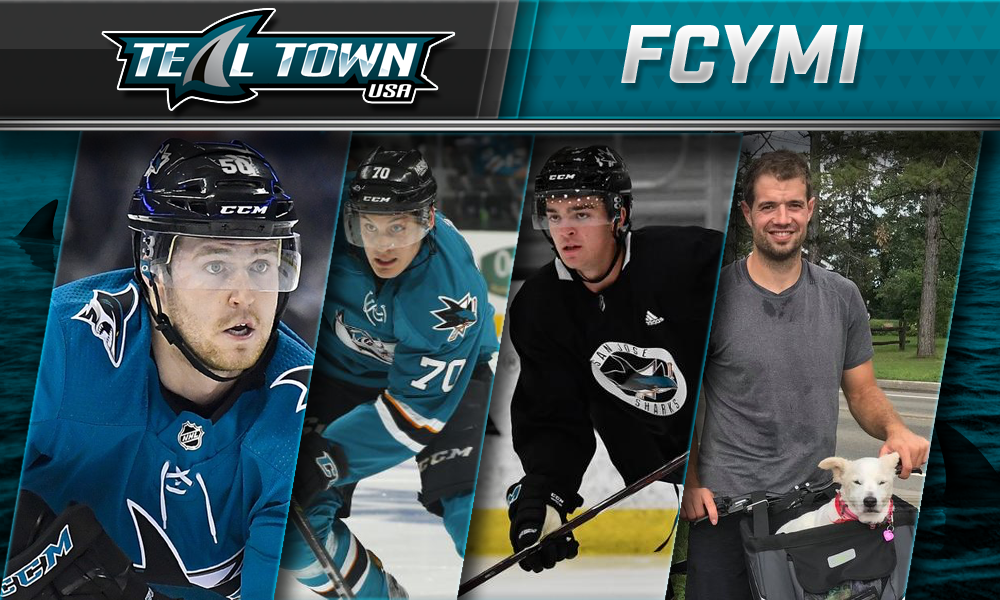 Welcome to FCYMI (Fin Cased You Missed It) a recap of the happenings in Sharks Territory and Cuda Country.

The San Jose Sharks took care of three of its up and coming talent.  Originally reported by Elliotte Friedman of Sportsnet, Chris Tierney and Team Teal avoid arbitration hearings. Both sides agree to a two-year deal, with an annual average value (AAV) of $2.935 million.

Arbitration filings for Jacob Trouba: Jets are at $4M, player at $7M. Hearing is 48 hours away. SJ and Chris Tierney settle on two-year deal with $2.9375 AAV.

A few hours later, the Sharks confirmed as did Top Shelf Sports Management, who posted Tierney signing his deal.

The 24-year old Tierney reached career highs last season with 17 goals, 23 assists for 40 points.  He also excelled in faceoff wins, where he finished third in the stats.  2017-18 was a season where he saw more ice time, including on the power play, along with the penalty kill, which he led the team in shorthanded points.  “Cobra” who has been centering the fourth line for a number of years, got upgraded to the third line where he flourished with more talented wingers.

San Jose Sharks General Manager Doug Wilson was pleased with this re-signing, “We’ve always known he (Tierney) was a responsible, defensive-minded player, but he took his offensive game to the next tier and showed that he can be a productive player in all three zones. We look forward to watching him continue his evolution in 2018-19.”

We asked you what you thought of this signing:

I love it if he can sustain the production

Our Kevin Lacy weighed in on this signing:

Chris Tierney and the #sjsharks have agreed to a 2-year deal at almost $3M per. It's about $1M higher than we all on @TealTintedPod felt he should be signed to. As @hockey_jerk has been saying, the equivalent #NHL signings of Devin Shore and Philip Danault set this bar high.

One of the pleasant pickups for the Sharks organization has been Alexander True.  The 6’1″, 195 pound Danish forward finished his first pro season in North America with the San Jose Barracuda by scoring 15 goals, 18 assists for 33 points in 68 games.  Prior to the Barracuda, True helped the Seattle Thunderbirds of the Western Hockey League win it’s first WHL Championship in 2017 by scoring 22 points in 20 playoff games.

True signed an Entry Level Contract reportedly three years at $925,000 AAV.  He is waiver exempt so he could get called up and go back down without being exposed to waivers and another team picking him up for free (unlike Matt Nieto and Ryan Carpenter.)

The 5’11”, 185 pound, Oakville, Ontario native was a standout offensively on the blueline for the Ontario Hockey League’s Guelph Storm.  This past season he had 13 goals, 54 assists for 67 points.  The 67 points were ranked third highest among OHL defensemen.  Showing promise, he will likely be in Guelph for this season and potentially next season.  Per our Hockey Jerk, he can’t go to the Barracuda until he’s played four seasons in the CHL or turns 20 before the nearest NHL season, whatever comes first.  However, he could sign an Amateur Tryout with the Barracuda after Guelph’s season is over.  It’s a similar ATO that Sasha Chekhovich and Alex Chmelevski signed late in the season to fuel the Barracuda’s late playoff push.

At The Cap… Not Quite That Cap Though

With these signings, the Sharks are at the cap… sorta.  According to capfriendly.com, Team Teal have reached the limit of 50 contracts.  With the Sharks waiving Noah Rod earlier in the week, the Sharks’ signings on Wednesday pushed them to the contract limit.  San Jose does have a skosh under $4.4 million in cap space.  (Yes, I owe AJ Strong residuals for using skosh.) You know Doug Wilson isn’t done piecing this team together.

It is the offseason and not everyone trains in the same way.  As is the case for Sharks veteran defenseman Marc-Eduoard Vlasic.  He tweeted a picture of cycling with his precious dogs, Macy, Kelly, and Nicky.

Taking the pups out and prepping for next season, Pickles is multi-tasking at it’s finest!

Evander Kane at the ESPYs

Melting on the red carpet in Los Angeles, Sharks forward Evander Kane chatted with KGO-TV’s Larry Beil about the ESPYs and the hopes for the Sharks in the upcoming season.

Once the ESPYs began, the ladies shined liked stars… and stripes.  The ESPY for Best Game went to the United States Women’s Olympic Hockey Team for their gold medal victory over Canada at PeyongChang in February.  The win sparked some controversey on Twitter with those who “don’t care about hockey” or “didn’t know that women’s hockey existed” and thought the Georgia – Oklahoma Rose Bowl game was more deserving.  Sorry, a college football semifinal comes in second over a gold medal hockey game that went into overtime, then a shootout, and kept many fans and lurkers late into the night around North America.

Happy Birthday to the Melkman

Birthday wishes to Melker Karlsson.  Well wishes to the hard working Melkman!  We won’t forget your overtime winner against Edmonton in 2017.

Tell us what you think of Fin Case You Missed It!  Continue to the enjoy the summer!  Can’t wait for Captain’s Practices!