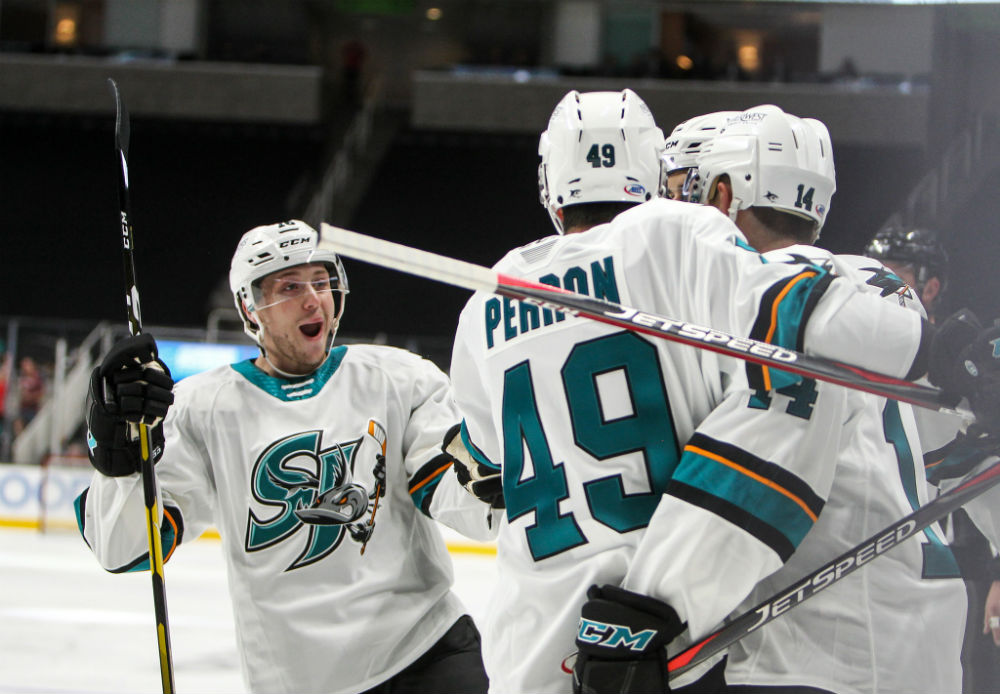 The San Jose Barracuda got off to an excellent start to the 2018-19 season. The team opened the season at home with a 4-1 victory over the Ontario Reign. In Bakersfield the following night they would defeat the Condors by a 5-1 score. There are a lot of new faces on this Barracuda team, 10 rookies are on the roster. This team is the youngest in the AHL with an average age of 24.4 years old. The new faces made their presence known this weekend while a familiar face looks for redemption.

Dylan Gambrell entered training camp favored by some to make the big club out of training camp. By the end of camp, it was pretty clear though that he was just not ready to be a full-time roster player. On the Barracuda he would be given the opportunity to play big minutes and be a big part of the offense. He certainly took advantage of this with a 3 point night, scoring the first two goals of the game. His first goal came 5v5 while his second was on the power play. He would also assist on Francis Perron’s first goal of the game. Maxim Letunov would add the fourth goal for the Barracuda in this game. Antoine Bibeau made 30 saves for his first win of the season.

With Joe Thornton suffering swelling in his surgically repaired knee, Gambrell would be returned to the Sharks after the conclusion of the game. After his showing on the Barracuda, it will be interesting to see if he will draw into the lineup during the remainder of the Sharks road trip.

With Dylan Gambrell called up to the Sharks Matt Fonteyne would draw into the lineup for the Barracuda taking his place between Perron and Praplan. The line continued to produce as Praplan and Perron would both have 2 point games. Nick DeSimone had a monster of a game recording a goal and 2 assists. Josef Korenar playing in his first professional game in North America has a solid outing making 37 saves. The Condors really took it to the Barracuda in the first period but couldn’t find the back of the net. The Barracuda would respond with a three-goal second period where they mostly controlled play. Korenar was the difference in the third period stopping many great opportunities despite allowing a goal, the Barracuda would add 2 more goals to seal the win.

Nick DeSimone and Jacob Middleton were a solid middle pair in the 2016-17 season for the Barracuda. The following season with both Joakim Ryan and Tim Heed graduating to the Sharks meant that they were thrust into the role of being the top pair. While it could be argued that many of the Barracuda players last season were miscast in the positions they were forced to play. DeSimone really struggled in the top pair role. The addition of Kyle Wood seems to have alleviated this problem. Playing alongside Keaton Middleton, DeSimone has looked more like the player who impressed so many in his rookie season. The pair seems to have decent chemistry and DeSimone has 4 points in two games after only scoring 20 points in all of last season.

While on the topic of defense pairs, the combination of Jeremy Roy and Cavan Fitzgerald has also been fun to watch. They sometimes can be an adventure in their own zone but offensively they are a threat from either point in both shooting or moving the puck to create offense. This is a pair that I’m really looking forward to seeing more of as the season progresses.

Who is Francis Perron?

Francis Perron who was acquired from the Senators in the Erik Karlsson deal has turned a lot of heads so far. When you join a team in the same deal as Erik Karlsson it’s hard to get much in the way of attention leaving some fans to wonder where this guy came from.

Perron was drafted in the 7th round of the 2014 NHL Draft. He played his Junior career with the Rouyn-Noranda Huskies of the QMJHL. In his final season, he scored 41 goals and 67 assists on a line with Timo Meier. He lead the Huskies in scoring during their QMJHL playoff run with 12 goals and 21 assists as they captured the Presidents Cup and league champions. The Huskies would advance to the championship game in the memorial cup where they would lose to the London Knights in overtime. Perron was tied with Meier for team points lead in the tournament.

Upon turning pro, Perron joined the dreadful Bermingham Senators who moved to Belleville the following season. During this time he was not able to replicate his junior success at the pro level especially on a team as offensively challenged as the Senators AHL Affiliate. With better linemates and increased opportunities afforded to him by the Barracuda, it will be interesting to see what he is truly capable of.

The greatness of Maxim Letunov will get overshadowed by the Gambrell’s and Chartier’s of the world. For fans that follow the Barracuda more closely though are quickly understanding the excitement that came when he turned pro. The part of Letunov’s game that impresses me the most is how despite his size and reach he can make ridiculous plays in tight to the goal. His stick handling in tight places is superb and despite his size, he can move. His line centering Lukas Radil and Jayden Halbgewachs is going to one to watch as the season moves forward.

What were your thoughts of the Barracuda’s opening weekend? Let us know in the comments or let us know on Twitter at @TealTownUSA or @IanBlogsHockey