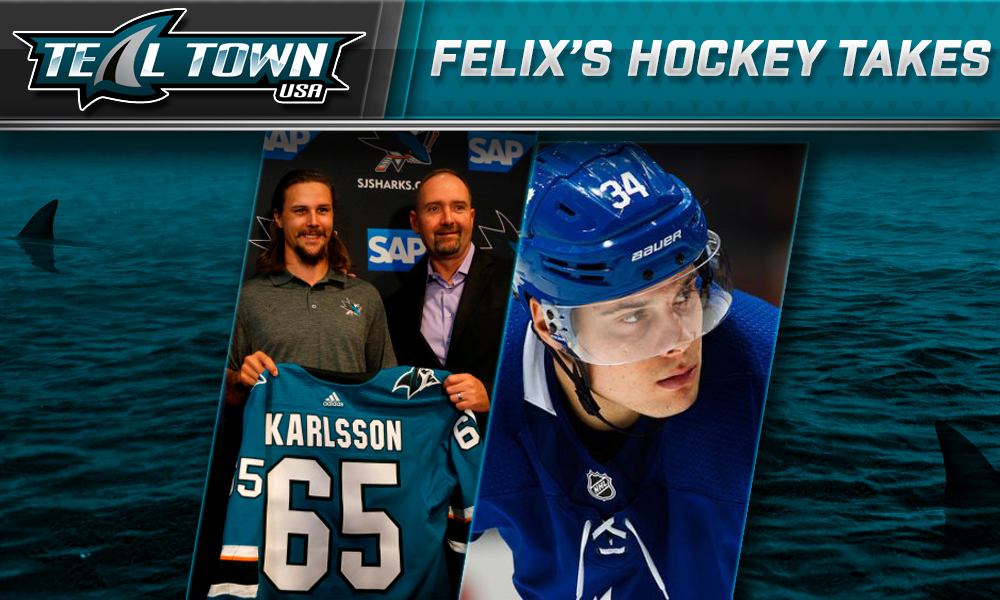 Catching Up And Shameless Self-Promotion

It’s been a while since I last posted one of these. Cue The Titanic’s “It’s been 84 years” GIF. Hope you all had an awesome offseason and are currently enjoying every other game that’s not the San Jose Sharks because we have quite a bit to talk about when it comes to them.

I do also want to talk extensively about the Toronto Maple Leafs’ Auston Matthews tearing it up right now and sparking the “greatest player” debate in the media. Hopefully you’ve been enjoying my new series of articles up on the website called “Growing The Game” where I love to talk about the sport of hockey and how far it’s come in the various ways the league loves to promote the game and the different ways we love talking about it!

Without further ado, let’s get right to it.

I wrote a bit about the Erik Karlsson trade in my season preview for the Sharks. In a season that’s been MASSIVELY hyped (because that’s what happens when you trade for a league superstar), and in a year where the Sharks aren’t just expected to contend for the playoffs — they’re going all in for the Stanley Cup, the Sharks have … disappointed a little. And that might look like an understatement because of their average road record thus far, but unlike probably a third of the Sharks fan base, I’m not panicking. At least not yet. Here’s why.

Guys, we’re six games into the season. The Sharks are going to be playing game no. 7 at home at the Shark Tank in San Jose, hosting number one overall draft pick Rasmus Dahlin and the Buffalo Sabres tonight. Now, granted, there’s a lot of nervous anticipation for tonight’s game. First off, you’ve got the debut of the new alternate #StealthMode jerseys. Last I checked, the Sharks don’t do well in their third jerseys. Heck, that’s the reason why the Sharks ditched their Heritage jerseys, since they kept losing in those too. It’s unfortunate though, ‘cause those were nice.

Besides the whole jersey talk, let’s talk about their play on the ice. Now, it hasn’t been bad. Sure, there are people who will pick apart every mistake Brent Burns makes that leads to a goal-against or grade-A scoring chance against. And you know what? Even as a fan of Burnzie, I’ll be the first to admit that he still has his issues. I don’t know if he’s trying too hard or whatever. Something’s got to click with him and it’s got to start soon. Maybe even tonight. I will say though he didn’t have a bad game against the New Jersey Devils.

Aside from Burns though, there are players who do need to get their game together soon. It’s also a case of team chemistry and just taking that time for the players to really gel together, which brings me to my next point.

Sharks fans have been spoiled with some great trades over the years with great players and superstar players. Obviously, you’ve got Joe Thornton, who won the Art Ross the year he was traded to San Jose from Boston. You’ve also got Martin Jones, who backstopped the Sharks to their first Stanley Cup Final in his first year in teal. You have Evander Kane, who was acquired at last year’s Trade Deadline, who’s been putting up points for team teal.

Erik Karlsson is the latest example of that, coming over from Ottawa at the start of training camp in the preseason. Unfortunately, not all players gel within just days of being traded. Such is the case with Karlsson who, according to Hockey Reference, has just 3 assists and is a -5. He’s still trying to figure out the system, but I will give fans this. The coaching staff needs to start making adjustments.

Honestly, this team is too talented to keep up a middling record overall. Think about it. You have Joe Thornton. You have Joe Pavelski, Logan Couture, Tomas Hertl. The list goes on and on and on. And finally, as I mentioned, you have Erik Karlsson. Erik. Freaking. Karlsson. This isn’t the Ottawa Senators whose owner just declared a rebuild (and speaking of the trade, yes, both Chris Tierney and Dylan DeMelo are doing well with their new team).

This is the San Jose Sharks hockey club that’s been through plenty of postseason pain, has been to the big dance, and would love to go back there again to win the big shiny silver trophy for the first time in franchise history. Keep in mind. Doug Wilson didn’t trade for Erik Karlsson just so he could watch his team disappoint for the umpteenth time. It certainly wouldn’t help his case to retain Karlsson as a free agent come next summer in July. This team is simply too talented to not put up results. They will get there, but it’s got to start tonight.

Auston Matthews Is Lighting It Up With Toronto, And Sparks “Greatest Player” Debate in Doing So

So, this Auston Matthews kid is pretty good, eh? Well, that for sure would be understatement of the year. Seven games into the Toronto Maple Leafs’ season, the 21-year-old San Ramon native has 10 goals and 6 assists. 10 goals. He’s currently averaging more than a point per game, and we’re not even at the quarter mark of the 2018-19 campaign. It’s insane.

Auston Matthews of the @MapleLeafs is the fifth player in NHL history to record multiple points in each of his team’s first seven games to open a season. #NHLStats #LAKvsTOR pic.twitter.com/9GCbBhqoZP

So, long story short, who’s the greatest player to play the game right now? Obviously, people are going to say Sidney Crosby because he helped Pittsburgh win three Cups and has an Olympic gold to his resume. And look, this isn’t to take away from any of those accolades and his incredible skill set. Don’t get me wrong. He’s an incredible player. But hockey’s a team game, and if we didn’t measure greatness from all those Cup wins, honestly it’d be a bit of a toss-up.

Look, Crosby has been in the league obviously longer than both Matthews and McDavid has. Drafted in 2005, the 31-year-old has played 869, almost 870 games. He’s got a little less than 200 games to reach the thousand games milestone. Neither Auston Matthews nor Connor McDavid were even born when he was drafted.

So yes, Sidney Crosby is the best in the world. But I also feel like his time is coming to an end (and it almost did come to an end a few years ago had he not been able to overcome his concussion problems). Both he and Alexander Ovechkin have won at least a Cup now, and Ovi was drafted a year before Crosby. But the old Crosby versus Ovechkin rivalry is slowly starting to come to an end. Who knows how much longer they’re going to be playing in the league? And you’ve got younger and faster players coming up, like Matthews and like McDavid, Patrik Laine, etc. So I think eventually we’ll have to pass the crown for the “greatest player” title real soon.

Maybe it’s Auston Matthews or Connor McDavid. But make no mistake about it. These are the two most electrifying players of the young generation of hockey players that are just starting to trickle in, and they’re fun to watch (unless it’s against the Sharks).