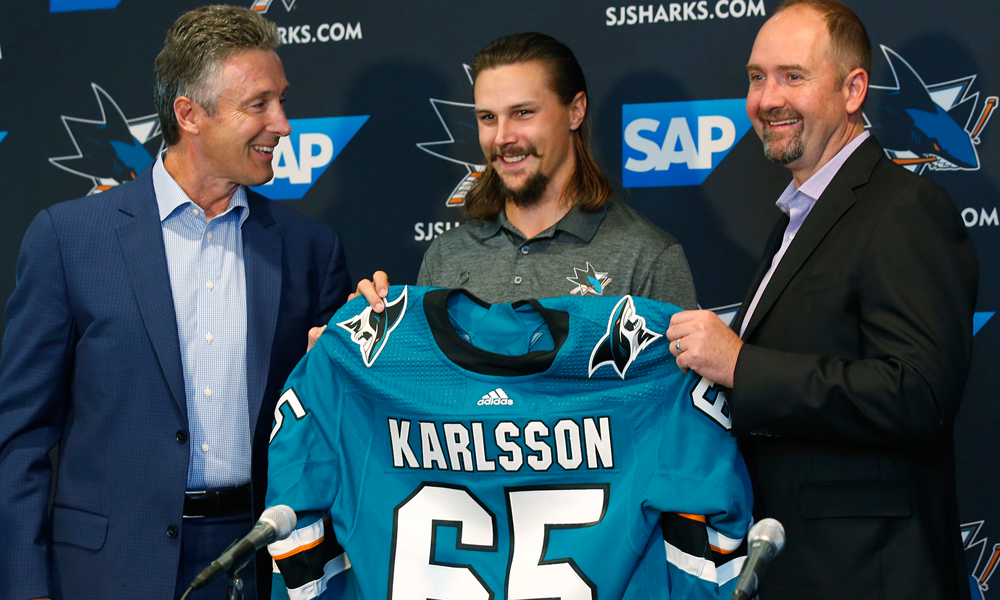 San Jose Sharks general manager Doug Wilson announced today that the club has re-signed defenseman Erik Karlsson to an eight-year contract extension. Per club policy, terms of the deal were not disclosed, but according to CapFriendly, the deal is for 8 years at $11.5M making Karlsson the highest paid defenseman in the NHL.

Adding Erik Karlsson to a blue line that already has Brent Burns and Marc-Edouard Vlasic locked up long term (6 and 7 years, respectively) solidifies the backend for San Jose. It did take some time for Erik Karlsson to find his rhythm in San Jose. However, once he got past his emotional return to Ottawa on December 1st, the Sharks were one of the hottest teams in the league. During that span, the Sharks posted a record of 15-4-1 over 20 games with Karlsson (1G, 27A, +16) in the line-up until he sustained injury just before the All Star Game versus the Arizona Coyotes in mid-January. A Sharks squad featuring a fully healthy Erik Karlsson and Radim Simek along with Burns and Vlasic is a scary match-up for any opposing coach.

With Karlsson’s deal on the books, CapFriendly estimates the Sharks have only $12.5M left in cap space to try and sign RFAs Timo Meier, Kevin Labanc, Dylan Gambrell, and Joakim Ryan along with UFAs Joe Thornton, Joe Pavelski, Joonas Donskoi, Micheal Haley, Gustav Nyquist, and Tim Heed. Obviously, some of these Sharks will not be returning.

During a morning conference call, GM Doug Wilson stated “We support whatever time it takes for Joe Thornton to make a decision for his future. There will always be a place for Jumbo in this organization, on or off the ice.” As for the return of Joe Pavelski, Wilson said “I don’t think anybody should rush to conclusions about anything. There’s many ways to accomplish different things.” Infer what you will, but I believe Wilson will figure out a way to have both of the Joes in teal next season.

What does this mean for the remaining free agents? Obviously, Meier (30G, 36A, 66P) and Labanc (17G, 39A, 56P) deserve pay raises.  Can Wilson work his magic again and get both players on bridge deals? Wilson also said “We have some guys in the system, particularly on the wing, that we think are close”. This could be a telltale sign that Donskoi, Nyquist, Haley, and perhaps another Shark player may not be wearing teal this October.

The Sharks have some interesting pieces in the pipeline including Sasha Chmelevski, Ivan Chekhovich, and Joachim Blichfeld up front and Jacob Middleton, Mario Ferraro and Ryan Merkley on defense. Either way you slice it, Doug Wilson has more moves to make between now and July 1. As Wilson said today “if we have the chance between now and Friday, we will add picks.”