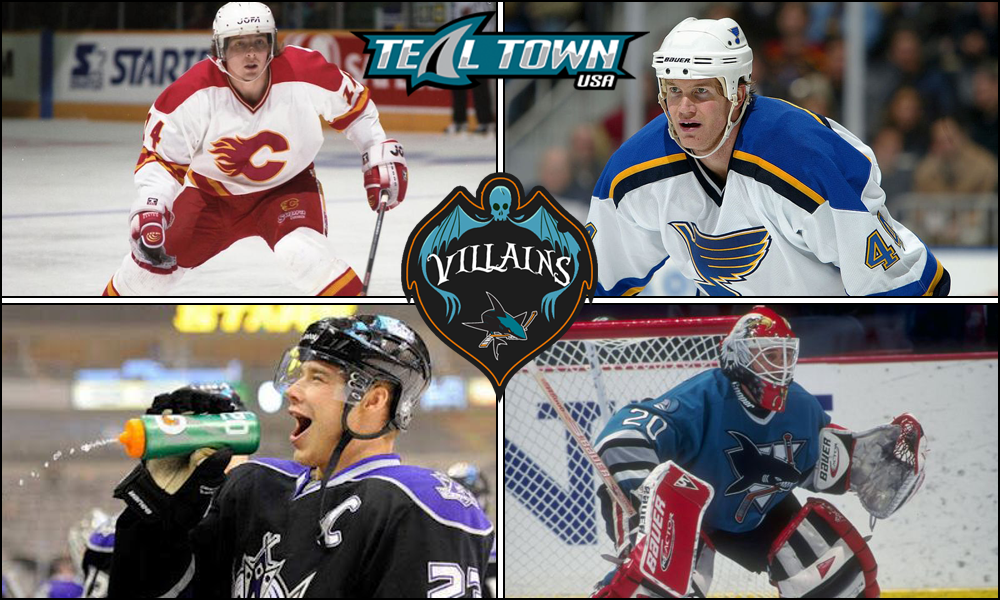 Almost since their inception, the San Jose Sharks have had their share of villains. The amount of vitriol some players could evoke from the Sharks fan base was impressive and inspiring. Words cannot aptly describe hearing 17,000 fans screaming “BELLLLLLLL FOOOUUURRRRR” in person. For long time fans, this list will elicit some fond memories. For newer Sharks fans, enjoy the history lesson.

The hatred for Fleury likely began on February 10, 1993. Theo set a Calgary Flames franchise record by going +9 in a 13–1 victory over the Sharks in which he scored six points.

The 5′ 6″ pest seemed to be a scoring machine whenever he played the Sharks, even if he wasn’t playing for Calgary.

During the 2001–02 season, Fleury continued a documented struggle with substance abuse. In a December 28th game against the San Jose Sharks, it impacted his behavior on the ice where, after receiving a major and game misconduct penalty, Fleury reportedly broke the rib of the beloved mascot SJ Sharkie during a hallway confrontation. Fleury later stated that he merely “nudged” Sharkie, but the story of the altercation has taken on a mythical life of its own as the years marched on.

Theo truly was the first player in the NHL that San Jose Sharks fans absolutely detested.

Belfour dug his own grave with Sharks fans. On January 25, 1997, the Sharks traded forward Ulf Dahlen, defenseman Michal Sykora, and goalie Chris Terreri for Eddie Belfour, largely considered one of the best goalies in the league when the trade occurred.

Due to injury, he only played in 13 games for San Jose, going 3-9 with a 3.41 GAA and a .884 sv%. However, there was a lot of excitement for the future as talks of a multi-year deal were discussed. Further fueling the hopes of Sharks fans was Eddie saying “I’m heart and soul a San Jose Shark”. Days later, Belfour signed a deal for less money to play for the Dallas Stars. It certainly didn’t help matters that the Dallas Stars were a hated division rival at the time.

Since that day, Sharks fans never missed an opportunity to chant “BEELLLL-FFFOOUUURRR” whenever the netminder played in San Jose. Even though Sharks fans never got over being spurned by “The Eagle”, Owen Nolan made the pain a little easier to bear the following season.

Drafted second overall by the Hartford Whalers in the 1993 NHL Entry Draft, Pronger played for a number of teams including the Edmonton Oilers, Anaheim Ducks, and Philadelphia Flyers. However, it’s his time with the St Louis Blues that most Sharks fans remember.

During the 2000 playoffs, the 8th seeded Sharks faced off against the President’s Trophy winning St Louis Blues. After losing game 1 to the Blues, the Sharks won the next 3 tilts. During this stretch, Pronger became unhinged. In Game 2, Chris took an unsportsmanlike and game misconduct while compiling 14 penalty minutes. During games 3 and 4 in San Jose, Pronger never missed an opportunity to complain about a call that went against St. Louis. Sharks fans became relentless, chanting Pronger’s name and booing whenever he touched the puck.

These games also took place as the internet was booming. A few inventive fans printed out large signs on dot-matrix paper that read “BIGWHINYDEFENSEMAN.COM”. While the site didn’t actually exist at the time, it was a great Silicon Valley troll job from Sharks fans. Canucks fans likely know Pronger for his stomp on the back of Ryan Kesler’s leg.

*BREAKING* Torres has been suspended 41 games for being mentioned in this article.

While Raffi Torres did end up playing for San Jose, his life as a Sharks villain began during the 2006 playoffs versus Edmonton. During Game 2 in San Jose, Torres got in a devastating head shot on Milan Michalek. While the Sharks went on to win the game and take a 2-0 lead in the series, Michalek would miss the rest of the playoffs. Edmonton would go on to win the next 4 games and take the series. From that moment on, Torres was persona non grata in San Jose until 2013.

At the trade deadline in 2013, the Sharks traded their 3rd round pick in the 2013 draft to Arizona for Raffi Torres. A creature of habit, Torres was suspended for the remainder of the second round after putting a head shot on Jarret Stoll in Game 1.

The Sharks eventually re-signed Torres to a three-year contract but injuries, including an ACL issue, would cause Torres to miss most of the 13-14 season and the entire 14-15 campaign. While some Sharks fans did rally behind Torres based on the limited games he played in teal, everything changed during a 2015 preseason game versus the Anaheim Ducks. After nailing Ducks forward Jakob Silfverberg with a headshot, Torres was assessed a 41 game suspension and never played for team teal again.

The Sharks acquired Campbell and a seventh-round draft pick from Buffalo at the 2008 trade deadline in exchange for Steve Bernier and a first round pick that the Sabres used to take Tyler Ennis. Of note, Roman Josi was taken 12 picks later. Campbell, a pending UFA at the time, made an instant impact in San Jose after the deadline deal to get “Soupy” in teal.

Despite saying all the right things, Campbell ultimately left San Jose for Chicago, signing an 8 year deal with the Chicago Blackhawks. Even though Campbell posted 19 points in 20 games, he became yet another deadline rental that didn’t work out in the long term for GM Doug Wilson.

While Sharks fans never showed the same animosity they displayed against Ed Belfour, Soupy had boos rained upon him whenever the Blackhawks played in San Jose. Even the memories of an amazing, highlight-reel spin-o-rama goal could not change the minds of a jilted fan base.

Most Sharks fans hate Dustin Brown because of his knee shot on a blossoming Tomas Hertl back in 2013. Hertl scored 2 goals in his 2nd NHL game against the Coyotes. A few games later, he potted 4 against the New York Rangers. A lot of Sharks fans, including myself, have wondered just how much further along Hertl would be had it not been for the knee of Brown.

Despite losing his captaincy of the LA Kings in 2016, Brown is still a player who plays a borderline dirty game… in between figuring out which side is UP on a water bottle. For the remainder of his time in the NHL, Dustin Brown will always be a villain in San Jose for his shot on Hertl.

However, a lot of fans have forgotten about the ridiculous headbutt move Brown put on Logan Couture, that mysteriously went uncalled, on opening night of the 2015-2016 season.

It only makes sense that the other Sharks villain that’s still currently playing in the NHL is also from a SoCal team.

Oh, wait. Perry is now playing with former San Jose Sharks captain, Joe Pavelski, in Dallas with the Stars. Either way, for 14 seasons in Anaheim, Perry developed quite the rep for dirtiness against the Sharks.

Between dirty hits against Melker Karlsson, or Kevin Labanc, or Martin Jones or trying to pick on Dan Boyle, Perry has definitely made his presence known in San Jose.

With both Corey Perry and Dustin Brown in the twilight of their respective NHL careers, it will be interesting to see who the next great villain is in San Jose. I don’t know if the ravenous hostility for a player will ever reach the level of a Fleury, Bellfour, or Pronger, but having a villain to root against has always brought out the best in San Jose fans.

While playing only a couple seasons for the Sharks despite signing a 4 year deal, Boedker never became the scoring threat he was supposed to be. His claim to fame in teal is injuring Joe Thornton in January of 2018 and bringing Jumbo’s season to an end.

Did we miss anyone? Let us know in the comments below.