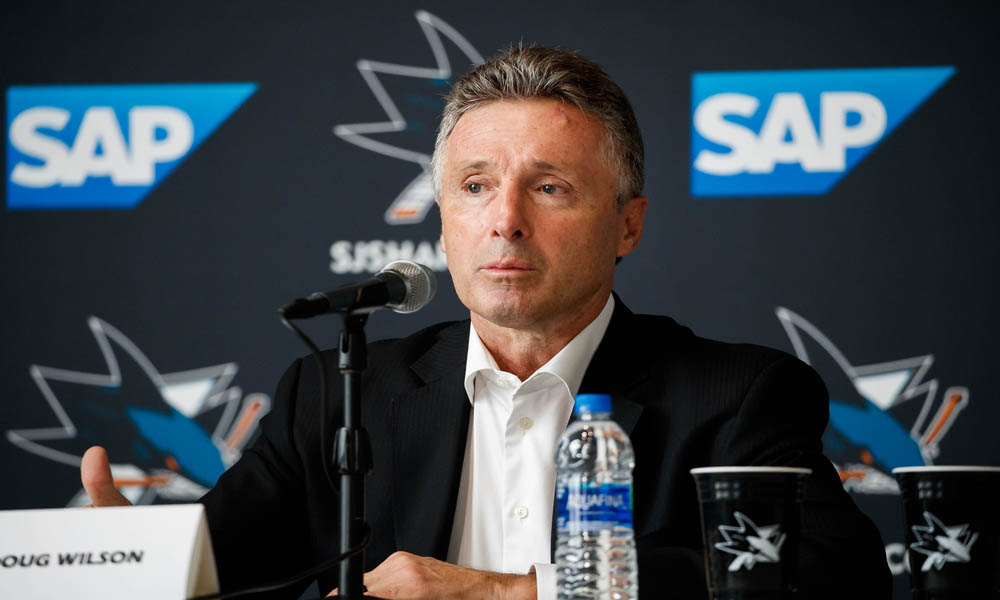 After 38 games played, the San Jose Sharks are at the bottom of the Western Conference. The team looks uninterested despite a coaching change while the power play has scored only twice in their last 42 opportunities. Before you bring up the 2018-2019 St Louis Blues, the Sharks don’t have a Jordan Binnington in their system and the Blues of last season were an anomaly. Simply put, why is there a dark cloud over SAP Center?

On many occasions, San Jose Sharks general manager Doug Wilson has mentioned accountability. Since taking over as GM back in 2003, Wilson has been responsible for making some big moves to improve the Sharks. Whether it was trading for Joe Thornton in 2005 or Dan Boyle in 2008 or Brent Burns in 2011, Wilson has a history of coming out on the winning side of big deals. Some even refer to him as “dealin’ Doug”.

That said, no GM is perfect and Wilson has his list of deals that didn’t work out. Just ask Mark Bell or Jannik Hansen. Wilson has come out on the losing side of some rentals (Bill Guerin, Brian Campbell) and acquisitions (Mikkel Boedker) too. Nevertheless, every move was clearly made in an effort to improve the team.

Prior to the 2014-2015 season, Wilson warned fans it would be a transitional year. It would be a year for the youth to make strides. In order to facilitate that progress, Wilson secured the services of John Scott. Fans were told Scott would be the deterrent for any opposing players that might consider taking a run at any of the new Sharks. However, John Scott played just 44 games during the ’14-’15 campaign. You’re not a factor in a game if you’re in the press box

While we’ve heard Wilson use the words “retool” and “reset”, he’s never used the world “rebuild” when talking about the Sharks. Wilson even admitted missing the playoffs in 2015 hurt business. Is Wilson’s refusal to rebuild why he’s stayed with some players beyond their “best by” date, such as Joe Thornton?

Even though Wilson is reticent, Doug could be relied upon for 2 things during the vast majority of his tenure. He would never sign a deal longer than 5 years but would hand out no-trade clauses like candy on Halloween. Go back to the 2015 roster and nearly half the team had some sort of clause in their contract. Over the last couple seasons, the method has changed. Wilson now appears to be less inclined to give a player a no-move or no-trade clause but more than willing to sign maximum term.

Until this season, Wilson had also never fired a coach mid-season until giving a pink slip to Peter DeBoer and his coaching staff earlier this month. Even though Ron Wilson and Todd McLellan may have deserved it, is Doug finally reacting sooner than he used to?

Wilson and company don’t have a great track record for drafting defenseman. Since taking Marc-Edouard Vlasic in 2005, the Sharks have drafted 27 defensemen to the 2016 draft. Out of the 27, only Justin Braun, Jason Demers, Dylan DeMelo, Joakim Ryan, and Mirco Mueller have seen real playing time. More so, each one is on another team today. And with the exception of Mueller, all of those players were taken in the 6th round or later.

The recent move of Doug Wilson Jr. to Director of Hockey Operations and the position as head scout has already signaled a strategic difference. In prior drafts, the Sharks would generally make a safe pick. However, the Sharks draft of a polarizing Ryan Merkley in 2018 indicates the Sharks draft department is finally ready to take some chances.

With those considerations, it’s hard to understand why it took so long for Tim Burke to be moved. I mean promoted. Obvious credit goes to the scouts for identifying value in the later rounds, but their history in rounds 2-4 leaves a lot to be desired. Imagine what the Sharks could be if they hadn’t missed on early defensive picks so often (Wishart, Petrecki, Wrenn, Doherty, Mueller). What does it say when 3 of your top 4 defensemen needed to be dealt for rather than drafted?

While EK65 is an obviously talented player, the Sharks already have Brent Burns. Does a team really need TWO guys that are offensively gifted but also responsible for an amazing amount of turnovers? Doug Wilson certainly could’ve spent Karlsson’s $11.5M on offense after letting 58 goals (Pavelski, Donskoi, Nyquist) leave the team. Now, I’m not saying Wilson should have resigned any or all of those guys. Still, $11.5M helps to replace the offense no longer on your team. The idea of having two Norris Trophy winners on the blueline looks amazing on paper. Yet, what does it say when the most expensive defense in the NHL has the worst goal differential in the conference?

Before everyone blows up the comments section or jumps on my Twitter timeline to tell me how nuts I am, let me be clear. I am not saying EK65 isn’t an extremely talented offensive d-man. I’m not saying he isn’t worth $11.5 million. My point is that you don’t need two of these types of players. While some say EK is a generational talent, believing that he’s simply not the right fit for the Sharks doesn’t negate that opinion. If Wilson moved Burns after locking up EK65, would this all be a moot point?

Recently, Doug Wilson defended the deal for EK65, but what else is a GM going to say? “I think I’ve made a terrible mistake”? Yet, since the addition of Erik Karlsson and the departure of captain Joe Pavelski, the Sharks chemistry doesn’t seem right. Neither Brent Burns or Joe Pavelski have had solid seasons so far, but some players bring out the best in one another. Ask Nils Ekman or Jonathan Cheechoo their thoughts on Joe Thornton. How does a team that was 2nd in scoring in the NHL fall to 27th a season later?

Recently, Brian Burke commented on the Sharks situation on SportsNet (3:45). Burke also mentioned on NHL Radio that he’d spoken with a few people that were quite familiar Sharks’ dressing room. Burke made the point that it hasn’t sat right with some Sharks players to see Evander Kane and Erik Karlsson essentially walk in and get everything they wanted after seeing so many others make financial and/or term sacrifices for the good of the team.

Coaching changes aren’t going to fix a general feeling of resentment. The fact that both Karlsson and Kane were recently involved in skirmishes and no one came to their defense supports these comments. This current squad is the definition of anti-Friends. In other words, I won’t be there for you. A recent 31 Thoughts podcast alluded to the same issue (23:30 minute start). Has the loss of their captain, Joe Pavelski, impacted this team far more than anyone could have predicted or anticipated?

After all the talk about the defense, clearly the Sharks need more from goalies Martin Jones and Aaron Dell. Every team needs a goalie to steal a game on occasion. But how many goalies are going to post solid numbers when the team in front leads the league in high-danger changes allowed. Too often, the Sharks $30M defense allows the opposition to get behind them and fire shots from high value areas. That said, Jones and Dell having a bad game seems to be the rule rather than the exception. Then again, if this goaltending tandem is so awful, how did they help the Sharks advance to the Western Conference Final last season?

Before this season began, the Sharks were hyping a lot of new names coming in this season. Ivan Chekhovich, Alexander (Sasha) Chmelevski, Joachim Blichfeld, Danil Yurtaikin, and Lean Bergmann were among the players expected to have an impact this season. There were expectations for Lukas Radil and Antti Suomela as well. Somehow, Noah Gregor is the one who leads the youth with games played as a Shark this season with 18.

Current Sharks Dylan Gambrell, Timo Meier, Kevin Labanc, and Marcus Sorensen were all expected to take steps forward this season. Each one of them is significantly off pace from the 2018-2019 campaign. If even some of these players are on last season’s pace, the Sharks are likely nowhere near the bottom of their division. How did Doug Wilson and staff misjudge their prospects so poorly?

While the buck ultimately stops with Doug Wilson, I still remain doubtful that he’s on the hot seat. Since Wilson was made GM back in 2003, the Sharks have missed the playoffs only once. Wilson has a lot of equity built up with owner Hasso Plattner who is essentially an absentee landlord. Still, Plattner has proven he wants to win, allowing Wilson to spend to the cap every season while spending millions to upgrade the SAP Center. Plattner must also be pleased that he can count on Wilson to ice a team that will bring in extra revenue every Spring.

Comparably, the Dallas Stars have made the playoffs just 7 times in 15 seasons since 2003. The Stars have only made it out of the 2nd round once during that time. In fact, Dallas has only made the playoffs 3 of the last 11 seasons. But even if you’re still clamoring for Wilson to be replaced, his successor will also be handcuffed by the current contracts doled out by Wilson. As stated earlier, Doug Wilson has not left himself with many options. He’s already fired the coaching staff. Aside from Evgeni Nabokov though, I wouldn’t bet on this staff returning to these positions next season. Remember, Bob Boughner wasn’t named head coach but rather “Interim Head Coach”.

The most obvious and moveable asset Wilson can move is defenseman, Brenden Dillon. But is it already too late to trade for a piece that will help now? Does Wilson need to move Dillon or other pieces to replenish draft picks. As of now, the Sharks don’t have a 1st round pick in 2020 or a 2nd round pick in 2021 because of the Karlsson deal.

The bottom line is that Doug Wilson has painted himself into this corner. And what happens in 2023 when Hertl will deserve a hefty raise and you still have $53 million dollars tied up in Couture, Kane, Meier, Karlsson, Burns, Vlasic, and Jones? Can “dealin’ Doug” be able to play the dentist and get some people into the chair again? Will the next decade of Sharks hockey test the patience of an already disinterested and dwindling fan base? Will Wilson’s desire to have two Norris trophy winners on the Sharks roster ultimately be the beginning of the end of the Doug Wilson era?