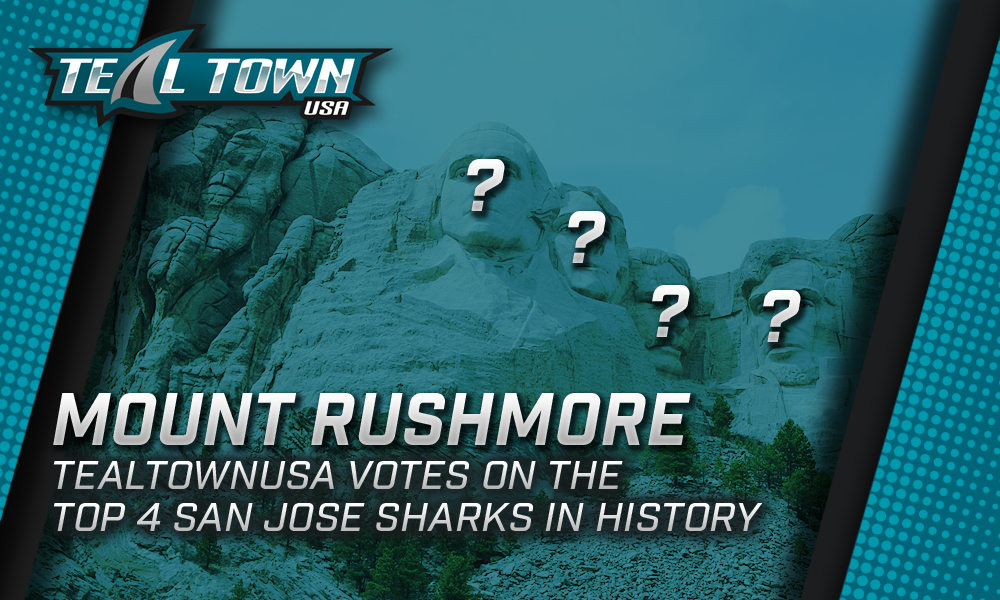 So far this season, I’ve written about and heavily criticized the San Jose Sharks a few times. Twice, specifically. With all the negativity surrounding the team (and for good reason), I’ve decided to have a little fun with this article.

Recently, the Sharks hosted the Dallas Stars. Of course, this also meant that former Sharks’ Captain Joe Pavelski was in town. Naturally, given his tremendous impact on the organization and the fan base, the fans gave him a standing ovation following the video tribute.

With that factoring in, Brodie Brazil posted the following tweet for Sharks fans to ponder.

Who is on your “#SJSharks Mount Rushmore”…?

Inspired by his tweet, I’ve asked fellow colleagues and fans of Teal Town USA to chime in with their 4-player Mt. Rushmores. I’ve also included their reasons below, as well as my own picks and reasons.

Marleau was drafted as a Shark, and spent over two decades in San Jose. He should be on every Sharkmore.

Thornton turned the franchise around. No one ever got past 80 points before Jumbo came to the Sharks. He’s done it 5 times. He’s a leader on and off the ice. And of course … Slappy.

Burns is a revolutionary defenseman who changed the way the team played with his style of play.

While the ‘93-’94 Sharks had an amazing playoff run, the Sharks teams of the early nineties never had much of an identity. When Owen Nolan arrived in October of 1995, the feisty power forward gave the young team their first real identity. Nolan brought a nasty Irish streak and defined Sharks hockey during his captaincy. Win or loss, visiting teams always physically felt the results of a game during the Nolan era. The guy called his own goal to cap off a hat trick in an All-Star Game San Jose was hosting and scored a goal from center ice in a playoff game vs. the President Trophy winning St. Louis Blues. Those are Sharks moments that will live forever.

Patty Marleau is the all-time goals leader, and all-time points leader. He is also Mr. Shark. Take a look at the Sharks’ career leaders on Hockey Reference and that’s really all you need.

There were MANY goalies who curated the crease from team teal throughout the 1990’s. Names like Irbe, Flaherty, Terreri, Hrudey, Vernon, Shields, even Belfour, had their time in net. The Sharks never really found their guy until Evgeni Nabokov. During the 2000s, many came and went through the Sharks’ dressing room but Nabby was the one constant while playing for 3 different head coaches. The only goalie in NHL history to score a power play goal, Nabby will always be beloved in San Jose.

Just as Nolan’s arrival gave the Sharks an identity, Joe Thornton gave the Sharks respect and made the Sharks a legitimate contender nearly every year. Without a doubt, he is the best player the Sharks have ever had. Whether it’s memories of endless assists, the Jumbo slide, or the “rooster trick”, Jumbo has been the face of Sharks hockey for half of the franchise’s existence.

Nabby is the franchise leader for goaltending. His lasting legacy can still be felt upon the tandem today and into the future.

Patty Marleau is Mr. Shark. The longevity and consistent production of Patty is a testament to his work ethic and his love for the game. To me, his jersey should be the first to hang in the rafters.

Owen Nolan is really the first superstar to come to San Jose. He added a level of grit and propelled the first generation of Sharks in the playoffs.

Jumbo single-handedly took this team from being an NHL afterthought to a consistent Stanley Cup contender. He added a level of swagger and excellence that this team never knew prior to his arrival. He’s the consummate teammate and will be cherished as a Bay Area sports icon forever.

Patty is the Sharks leader in goals, points, and games played. He is also a former captain, All Star and Olympian, franchise icon, and is universally beloved by the franchise.

Jumbo is the Sharks leader in assists, 2nd all time in points, former captain, ambassador and glue for the team, hockey legend, All Star and Olympian. He is a team-friendly guy who takes discounts to make the team more successful.

Doug Wilson, like him or hate him, has had his fingerprints all over the identity of this franchise since he took over in 2003.

Mike Ricci has the most interesting face to sculpt into this monument.

They were all captains for extended periods of time, and they all are faces of the franchise. You think the Sharks and players in teal, you can’t go past those guys. Their personalities and performances were/are outstanding and really encompass what the Sharks are all about.

Jumbo Joe has long cemented himself as one of the greatest players to ever lace up the skates. Us Sharks fans have soaked in every moment that the 40-year-old centerman has spent on the ice, playing against the opposition. His skill, vision, and innate playmaking talent have enabled him to climb the record books year after year, passing former greats and achieving milestones that shouldn’t even be possible, especially for a player his age. Few players in this league have stood the test of time, nor have they been able to withstand the rigors of this fast, physical league. Thornton has, and as a result, he is a surefire Hall of Famer. Furthermore, his passion, attitude, and love for hockey makes him one of the most beloved humans in the NHL.

Patty Marleau is Mr. Shark. Drafted 2nd overall by San Jose in 1997, his name has always been synonymous with team teal. Save for the two years he wasn’t in teal. He recently played his 1700th game against the Dallas Stars (now home to the third player I’ve anointed, whom I will talk about next). Also owns other records. Super nice guy, and like Jumbo, loves the game.

Joe Pavelski will always be one of my favorite Sharks of all time. A seventh round draft pick at 205th overall, it would have seemed unlikely that a pick that low would have succeeded in the NHL. Well, Pavelski defied the odds and really worked his way into a good, successful NHL career.

He’s been a key part of the Sharks’ playoff runs. He worked his way to captaincy, leading the Sharks to their first Stanley Cup Final in 2016. His work ethic and skill level earned the respect of Sharks fans and his teammates, igniting the famous Game 7 comeback against Vegas when he was injured during the game.

Last but not least, his work ethic and craft have earned him some kudos and recognition throughout the league. He scores goals in many different ways, most notably the tips in front of the net. He doesn’t get down on himself. He doesn’t get frustrated easily. His willingness to work, even through adversity, I think is a trait I most admire about him.

Logan Couture is a clutch performer, and a playoff performer. He tells it like it is in the media scrums. He lets his play on the ice do the talking. I firmly believe that despite the rough season he and his teammates have been having, he’s still a leader in the locker room and on the ice.