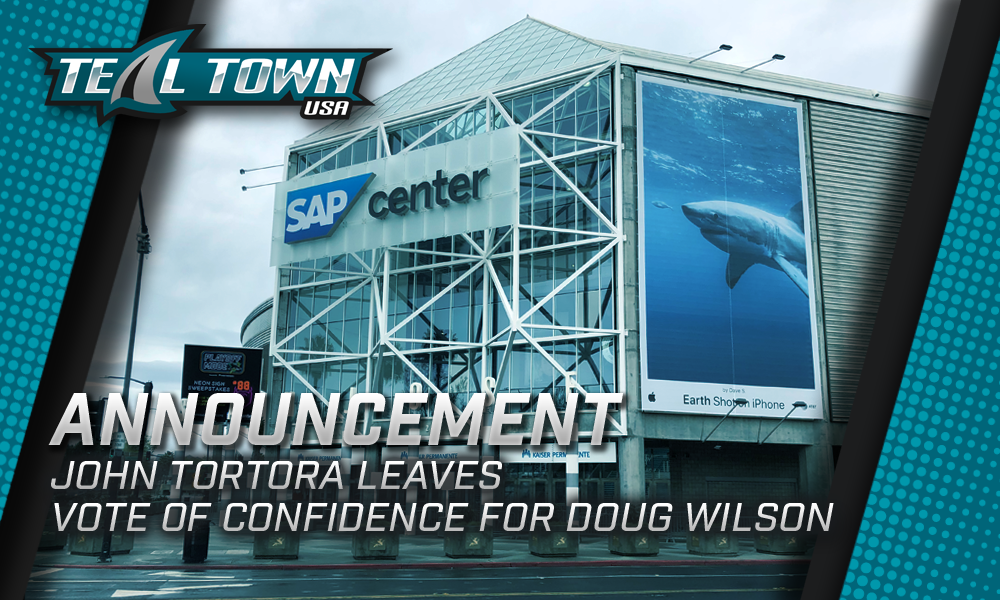 Today, the Sharks announced that co-president, John Tortora will be leaving the organization at the end of June while Jonathan Becher has been named sole president. We will miss JT. He gave us our first front office interview and has always been forthcoming and fun to speak with.

Also of note, owner Hasso Plattner has given general manager Doug Wilson a vote of confidence: “I am supportive of Doug’s plan to get our team back on track.” As I wrote in my Questions for Doug Wilson article, Wilson has built up too much equity to be shown the door at this point. While never winning a cup, Wilson has consistently iced a competitive team during his tenure.

Time will tell if Wilson is able to make the necessary changes to a team that is vastly underperforming this season. The job may prove difficult after committing so much term and money to the defense. Based on recent disappointing drafts, the job may take longer than fans are willing to wait unless Doug is able to perform some of that ‘dealin’ Doug magic again.

Jonathan Becher has been named sole president of Sharks Sports & Entertainment (SSE), effective immediately. Becher will also serve as an alternate governor for the franchise with the National Hockey League.

John Tortora, who has served as co-president with Becher since 2017, will be leaving the organization to pursue other opportunities but will remain in an advisory position to the organization until the end of June.

Sharks General Manager Doug Wilson will continue to oversee the hockey operations department and continue to report directly to Plattner.

“I would like to thank John Tortora for his dedication to our organization and fans for nearly a decade,” said Plattner.

Plattner continued, “Over the last two years at the Sharks and his previous decade at SAP, I have seen first-hand that Jonathan delivers an outstanding end-to-end experience to customers. With his combination of technology and sports background, I am confident he is the right person to lead the organization through our next evolution.”

Plattner added, “While we are all very disappointed in the team’s performance thus far this season, Doug has a long history of leading our team to success. The last time we failed to meet our winning standards in the 2014-15 season, we were able to quickly rebound and re-establish a winning culture for the next several years. I am supportive of Doug’s plan to get our team back on track.”