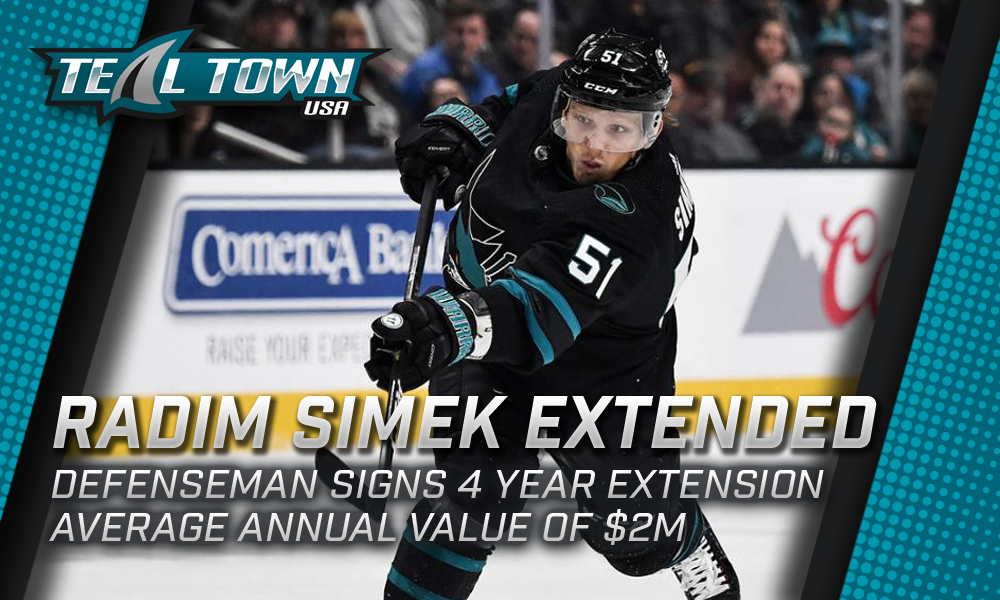 Several Czech sites are reporting the San Jose Sharks will announce defenseman Radim Simek has signed a 4 year extension. The 27-year-old reportedly signed a deal worth $8M with a $2M AAV. If the reports are accurate, this move would keep the Sharks defensive group of Brent Burns, Marc-Edouard Vlasic, Erik Karlsson, and Simek together through the 2023-24 season.

On March 3rd, CapFriendly tweeted out contract details, including a signing bonus that pushed the deal to $9M.

Clubs now have more flexibility when it comes to signing players to contract extensions this year, and new deals for next year.

“Radim has been an integral piece of our team defense for the last two seasons,” said Wilson. “His style of play blends a sound defensive game, coupled with a heavy physical ingredient and good puck-moving skills. His impact on our club when he is in the lineup is undeniable and we’re pleased he will be part of our team’s core moving forward.”

This season, Simek has played in 47 games, tallying nine points (two goals, seven assists) and 14 penalty minutes. He ranks fourth on the team in hits (91) and second amongst defensemen, despite having missed the team’s first 22 games. Since he re-joined the lineup this season, the Sharks are 24-19-4.

Last season, he was named “Sharks Rookie of the Year” after leading all Sharks rookies in assists, points and games played.

Simek spent his first professional season of North American hockey with the San Jose Barracuda of the American Hockey League (AHL) in 2017-18, recording 27 points (seven goals, 20 assists) and a plus-six rating in 67 games. Amongst Barracuda defensemen, he ranked second in points, goals, and assists, and first in plus/minus (+6) and shots (128).

Prior to arriving in North America, Simek helped Liberec win the 2015-16 Czech league championship and was named the league MVP after posting 10 points (three goals, seven assists) in 14 games. He also posted the league’s best plus/minus (+13)

Simek led his team in goals amongst defensemen for three consecutive seasons (2014-17), including leading all league defensemen in 2015 and 2017.

The five-foot-eleven, 200-pound native of Mlada Boleslav,Czech Republic was originally signed by the Sharks as a free agent on May 23, 2017.