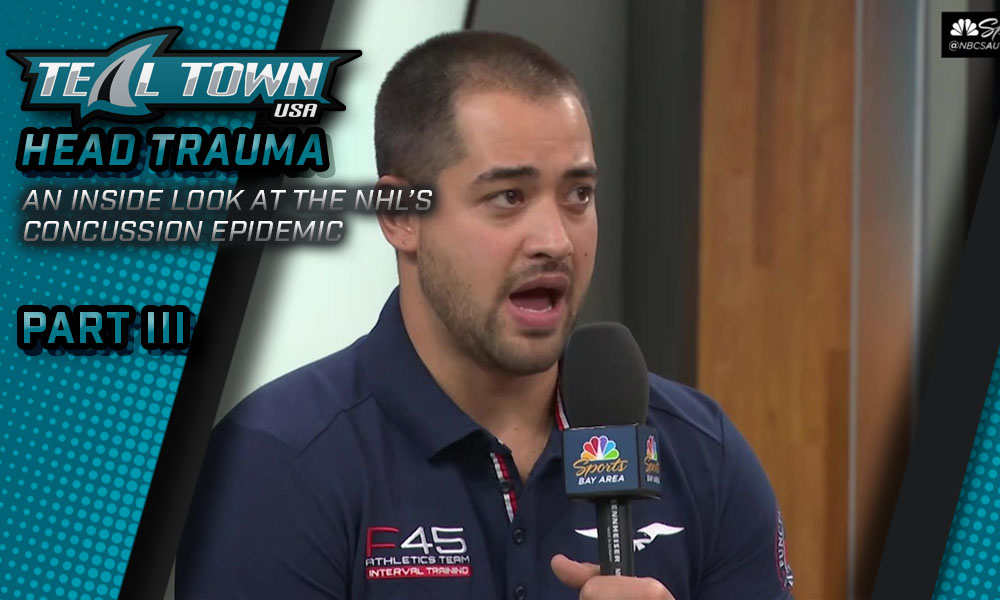 Disclaimer: This may be a very heavy subtopic for some, as mental health has been frequently linked to CTE. Read at your own risk.

Derek Boogard. Rick Rypien. Wade Belak. Steve Montador. Greg Johnson. These are just a few of the many names who have succumbed to CTE over the years.

Sharks fans know the struggles of mental health all too well. Jamie Baker, color analyst for the San Jose Sharks, shared his struggles with The Athletic’s Katie Strang, the NBC Sports documentary Headstrong, and more recently for the newly formed 1991 Club for Sharks fans.

Many other athletes have gone through similar struggles and shared their stories. Another former Shark, Devin Setoguchi, dealt with similar mental health struggles, and struggled with drug and alcohol abuse.

Setoguchi also voiced his displeasure with the NHL’s mishandling of concussions and bad hits during last year’s playoffs, as did Sharks analyst Curtis Brown.

5 min major straight to Braun’s jaw??? This is pis*ing me off what hell is going on? @NHL

I thought the head as first contact was something you were protecting? I don’t know have anything else to say @nhl I’m shook by the way this playoffs has been officiated

While he has not yet shared his story, Ryane Clowe — who was named head coach of the ECHL’s Newfoundland Growlers in 2018 — later stepped down from that position for medical reasons. This is someone who also dealt with concussions in his playing career, serving as an enforcer for the San Jose Sharks before spending his last two seasons in the NHL with the New Jersey Devils.

Daniel Carcillo’s Mission Against the NHL’s Mishandling of CTE

Most notably in the last few years, former NHLer and Stanley Cup champion Daniel Carcillo took a stance against the NHL’s attitude on concussions. On social media, he’s made mention about how he will not allow his kids into hockey until there is a valid, sensible solution to prevent concussions in the sport.

On June 13, 2018, Carcillo’s story went public on The Players’ Tribune. It detailed his struggles transitioning into life after hockey, and how he got help for his concussion symptoms. To this day, he finds ways to cope with his mental health struggles, being a staunch advocate for the controversial drug, marijuana, which he has also spoken about.

Malarchuk is another mental health advocate and former NHLer who’s shared his story for Headstrong. A lot of people only know him as the goalie who got his throat sliced in a freak collision in a hockey game a long time ago. That was his first brush with death. However, later on, he began to experience severe mental health issues, even surviving a suicide attempt.

I’m not ashamed to say that I’m mentally ill, but that doesn’t mean mentally weak.

Those were the words spoken by now Vegas Golden Knights goalie, Robin Lehner, who opened up about his mental health struggles in his acceptance speech for the Bill Masterton Memorial Trophy last year. It’s a reminder that mental illness is not a sign of weakness. It’s a sign of strength, because you are stronger than your mental illness.

Mental health is a huge societal issue. Everyone has struggled with it at some point in their lives. It’s even more prevalent in sports. Unfortunately, as I mentioned in part three, these players have had to endure so much pain in their careers. We know the sacrifices they’ve had to make every game, blocking shots, dropping the mitts, taking hits to make the plays. Sometimes, they’re on the receiving end of some really bad hits.

If you suffer from mental health issues, please reach out to someone. Seek professional help if necessary.

If anyone you know is suffering from mental health issues, please reach out to them.