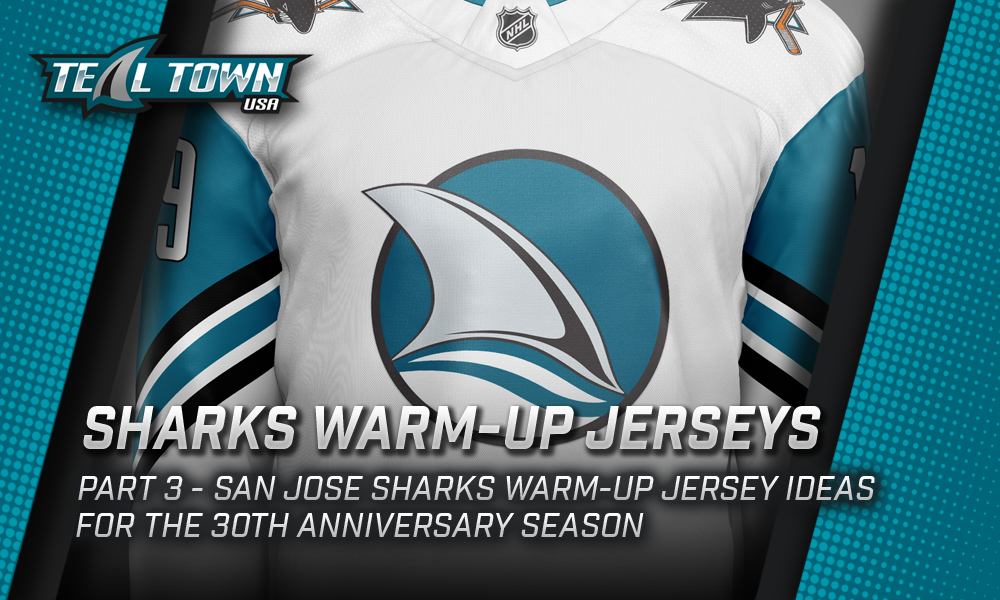 In part 1 of this series on Sharks warm-up jerseys, we focused on honoring the history of the San Jose Sharks franchise. In part 2, we spotlighted the alternate, or “third”, jerseys for the Sharks. For part 3, Erik Kuhre (@puckguy14) and I have some fun and create some designs we think would be interesting options for warm-ups.

The challenge for us was to create a home and away jersey, an alternate, a winter classic option, and a stadium series design. Finally, I also put together some potential options for #BayAreaUnite. Let us know which ones you think are the best and worst in the comments below.

Home and Away – Erik

Inspired by the past, molded for the future.  The road jersey is inspired by the inaugural white jerseys from 1991-1997.  The home teal is a nod to both the original style, but encases the sock design of the Nike style (second generation) jerseys worn from 1998-2007.  Both have the thin stripe of orange for nod to the thin stripe worn during the 2016 Cup Final run, as well as the SJ circuit board on the sleeves, and an updated fin logo and name and number font.

Home and Away – AJ

For my home and away design, I used the first black San Jose Sharks as an inspiration. While I do like the current Sharks jersey, I do think it’s a little bland. In my opinion, this design adds something extra without being too busy. I also added a teeth design to the collar as an homage to the chomp when the Sharks are on the power play.

An updated twist to a classic.  The Sharks original striping is used in a different way here. This is similar to the original design I submitted for the Barracuda jersey design contest in 2017.  This uses the Screaming Shark on the crest, with the Stealth fin logo on the shoulders.

I’m not even sure how I got here. I started off with one design and just kept tweaking until I arrived here. The 3 stripes on the waist and arm are an acknowledgement of the 30th anniversary. I went with the original teal and circle fin patches on the shoulders as a nod to the past while the crest looks towards the future. I also added a gradient to the letters to give it a little extra flava.

With Winter Classic jerseys, they have taken to a fauxback or retro look.  While the Sharks tend to break out the original style jerseys for their 25th (maybe 30th anniversary as well?) I went in a different direction as I used the original dark jerseys of the Oakland Seals for the design.  The super light teal is similar to the Golden Seals’ Pacific Blue worn in their last few years before relocating.

The winter classic option proved to be the most challenging for me. I wanted something that had a throwback feel but also incorporated a crest never used before. I designed the crest specifically for this jersey after having a look at some previous winter classic jerseys.

The Stadium Series jerseys are becoming ones that are modern, unique for the game. This one is no exception. Inspired by Silicon Valley’s circuit board, this jersey has “Electric Teal” accents to pop from a distance. The circuitry is also in the numbers but show up well when viewing from the left field foul pole at Oracle Park. An updated logo has an Electric Teal stick.

I’m a fan of the 2015 Stadium Series jersey and used it as inspiration for this design. I continued with the large stripe across the middle and on the arms. But I knew 2 things had to happen with my design. 1) It had to use the Sharks chomp logo and 2) it couldn’t be teal, black, white, or orange. The Sharks have already utilized grey in a previous warm-up and it looked pretty sick. Out of all the jerseys I mocked up, this might be my favorite.

Over the last couple of years, there have been nights at the Tank known as #BayAreaUnite. On these evenings, the Sharks pay tribute to one of the other pro franchises in the Bay Area. Above are some potential options for the next time one of the local teams work with the Sharks for another Bay Area Unite night.

Remember, if you go with any of these ideas, I wear a size 56. You have our addresses. 😉