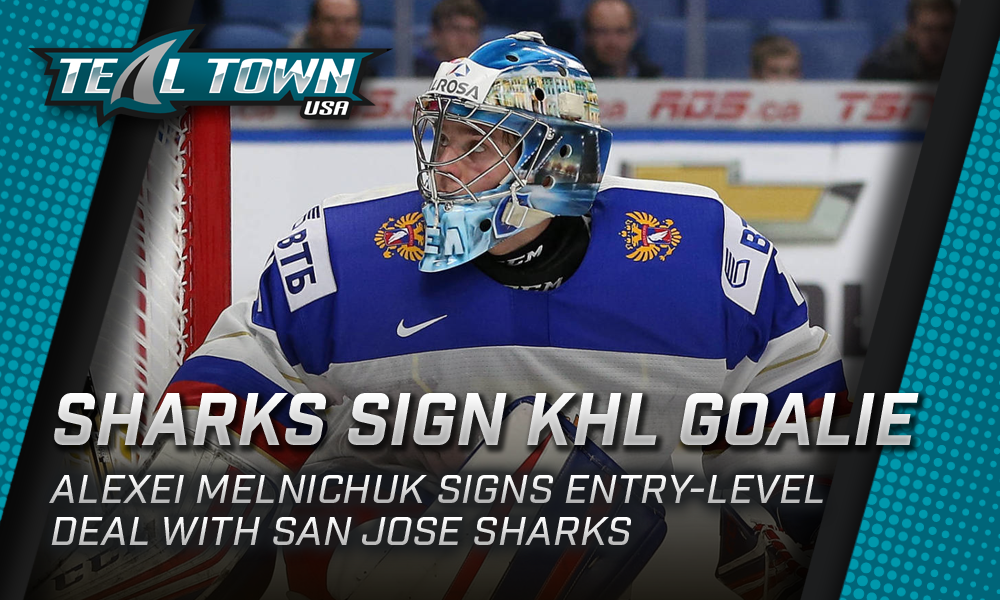 It had been speculated the Sharks were closing in on 21 year old goaltender Alexei Melnichuk. This morning, agent Dan Milstein confirmed the signing is official. Melnichuk will add depth to the Sharks goaltending corps and possibly provide some future hope at the position which is currently the Sharks’ weakest. As he is still young and a bit raw, it is expected he will see time in the AHL next season and possibly beyond before making the jump to the NHL. Details of the deal have not been released by the team but it is expected Alexei will sign an entry-level deal for the standard 2 years, paying $925k per season.

During the 2019-20 season Alexei primarily played with SKA St. Petersburg of the KHL. St Petersburg, featuring two former NHL regulars in Nail Yakupov and Jori Lehtera, finished the season first in the Bobrov division and only 1 point behind Moscow for league lead. While he was third among goalies in minutes played for SKA, Alexei had very respectable stats, recording an 8-5-1 record and leading the team with a .930 save percentage and 1.68 GAA. He also made 8 appearances with SKA-Neva St. Petersburg of the VHL, Russia’s second level league.

Alexei will join a group currently consisting of Martin Jones, Aaron Dell, Josef Korenar, Andrew Shortridge, and Zachary Sawchenko however there is a lot of uncertainty where he will fall in the depth chart starting with the 2020-21 season. Current Sharks back-up, Aaron Dell, is set to become a UFA and could be elsewhere whenever the next NHL season does start. Josef Korenar looked to be the Sharks top goaltending candidate to make the jump up to NHL if needed, but he was very streaky during the 2019-20 season. Andrew Shortridge was a disappointment following a fantastic college career and is a pending free agent. He very likely won’t be with the Sharks next season. Zachary Sawchenko did surprisingly impress this season as he was lowest of the minor league goaltenders on the depth chart as of last summer. Zachary earned some minutes in the AHL and, while it was a short stint, he lead the team in GAA and save percentage.

The Sharks also have 20-year-old Zachary Emond of the QMJHL’s Rouyn-Noranda entering his overage season as well as Mike Robinson entering his senior season as the starter at the University of New Hampshire.  So where does Alexei fall in this extensive list of goalies and how does his future look? I would guess the Sharks will either bring back Aaron Dell or sign another experienced NHL netminder. Alexei will likely need time, possibly a season or more to adjust to hockey in North America. He will likely fight it out with Korenar for starter duties with the Barracuda. I wouldn’t put too much stock in Alexei’s fantastic KHL stats as the other 2 primary goalies for SKA also recorded similar GAA and save percentage numbers. Melnichuk was heavily sought after by NHL clubs and at a young age to already have experience in Europe’s top league speaks volumes for his abilities.

This signing is another positive of having Evgeni Nabokov working in the Sharks organization. Doug Wilson said “Nabby deserves a lot of credit for this one.” There was a noticeable improvement in Martin Jones game after Nabokov began working with him which can provide Sharks fans with hope in the development of Alexei Melnichuk. Long term, the Sharks may have found their goalie of the future.